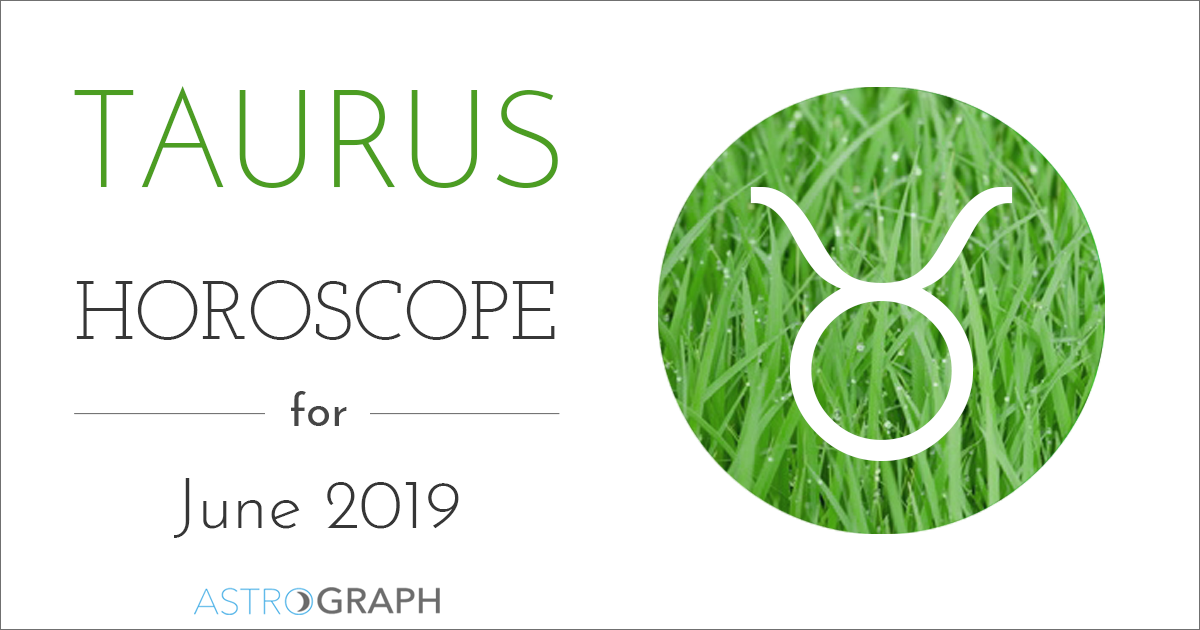 Posted on May 31, 2019 in Taurus |
By Henry Seltzer and Adam Elenbaas for ASTROGRAPH Horoscopes

This is another month of ups and downs, Taurus, with surprising events the new normal, and great rewards that come to you “when you look at it right.” You are really up against it in this spring timing. Amidst the strong crazy-wonderful arc of your development over previous months, you have reached a relative crisis point. There is no possibility that can continue in the same well-worn pathways; instead, the time has come for you to take a new turning. This involves your evolving worldview, which is an education of a whole nother kind than what goes on in school, and that additionally this month feeds on enlightenment that you receive from trusted partners. You are also more invested than ever in information of quite another sort that comes to you directly from your angel guides and the level of your own deep intuition. This tells you more true, when you open your inner gaze to receive it, than all the rush of logical accumulation from screens and word of mouth.

This month features two major sets of transits. The first involves the planet Mars in Cancer in your third house of the mind and communication, making oppositions to Saturn and Pluto in your ninth house of the higher mind (June 13th to 21st), and the other involves an ongoing T-square between several planets in Gemini in your second house of income and expenditures, Jupiter in Sagittarius in your eighth house of death and other people’s money, and Neptune in Pisces in your eleventh house of allies, friends, and groups.

The most intense and dynamic energy comes from Mars this month, who is currently moving through your third house of the mind and communication in the traditional sign of its “fall” or “depression.” This is a more emotionally dynamic and potentially volatile Mars that might be coloring your mood and mind this month, perhaps creating a few emotionally reactive moments or even full-on confrontations. As Mars moves through oppositions to Saturn and Pluto between the 13th and the 21st, tensions will rise as you are likely working through a series of mental or philosophical challenges. Given that Saturn is the ruler of your tenth house of career, and Mars also the ruler of your marriage house, it is possible that a series of value conflicts in love or at work are coming to a head. The good news is that things may lighten up significantly around the Summer Solstice of June 21st, as the oppositions from Mars start to fade and the Sun leaves Mercurial Gemini and enters the cooling waters of Cancer, where it should start to bring a clearer and happier mood, overall.

The other major transit of the month comes from a drawn-out T-square being formed between a series of planets in Gemini, along with a month-long square from Jupiter in Sagittarius to Neptune in Pisces. It all starts on June 3rd with a New Moon in Gemini in the second house of income and expenditures, opposing Jupiter in Sagittarius in the eighth house of death and other people’s money, and squaring Neptune in Pisces in the house of friends and allies. The Sun will then re-create the T-square between June 9th and June 10th, the Full Moon will activate it again on June 17th, and then Venus once more between June 22nd and 24th. The question behind this complex sequence has to do with income and resources. You are likely at a tipping point financially or professionally, perhaps faced with the need to make some difficult choices about what to do with your resources, where to place your time, money, and energy, or who you consider a valuable ally. Somewhere within all of this, the themes of intuition vs. logic, faith and spirit vs. reason and healthy skepticism will likely insert themselves into the conversation.

The last major transit of the month happens on June 26th and 27th, when the Sun in watery Cancer in your third house of the mind and communication will square Chiron in Aries in your twelfth house of dissolution and Surrender, likely bringing with it a moment of angst and yet also clarification and mental or emotional healing, which could function as a great relief after some of the choppier waters of the Mars oppositions earlier in the month.