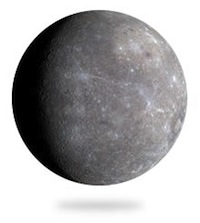 Tiny Mercury is the innermost and smallest planet in the solar system and can only be seen at morning and evening twilight. Because of this, the ancient Greek astronomers believed the planet to be two separate parts - one visible only in the morning which they called Apollo, and one visible in the evening, which they called Hermes. Later, the Romans named the planet after the God Mercury, a messenger and God of trade, profit and commerce. The astrological symbol for the planet Mercury is taken from this God's wand or caduceus, which is typically depicted as a short herald's staff entwined by two serpentine creatures, and which in later antiquity became the astrological symbol for commerce. A variation of this caduceus has come to symbolize medicine in modern times.

Mercury represents the mind and intellect, and rules Gemini, (the sign of duality), and also Virgo. It has its exaltation in Aquarius. Mercury is an airy planet, associated with all forms of communication and the in-flow and out-flow of intelligence and communication. Its position indicates how your mental function will be expressed, and where techniques and skills are available to you.

Mercury retrograde, which occurs three times a year for about three weeks each time, is interpreted particularly strongly. Mental pursuits and connections break down. The Mercury retrograde period is best used as a time for inner reflection. It is not a good time for making new decisions or new business plans, but it is ideal for reflecting on your current situation. It is best to quietly observe your inner process during Mercury retrograde, and to carry forward with your preexisting plans. Ask yourself: Where am I heading in my life at this particular juncture? Then try to move forward with new directions only after Mercury has gone direct, and perhaps even a fortnight beyond, when Mercury has left its retrograde shadow.