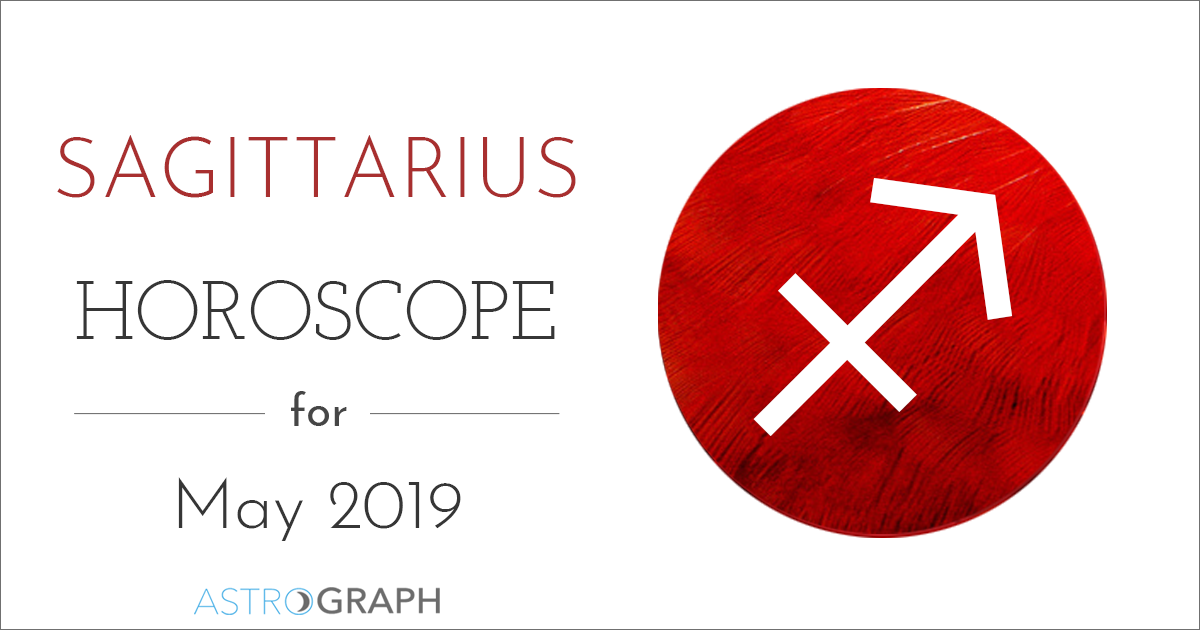 Sagittarius Horoscope for May 2019

Posted on April 30, 2019 in Sagittarius |
By Henry Seltzer and Adam Elenbaas for ASTROGRAPH Horoscopes

This is another month that leads you further into your own depths, Sagittarius, in search of answers to the fundamental question of who you are, on your own and with taking into account important partners in your life. As you explore inner mystical realities you are simultaneously navigating outer world concerns of schedules and responsibilities. Your fundamental mission of service to others, and to the world at large, is becoming more evident to you. Your values continue to be in transition, and perhaps also your finances, although the symbolic level of the latter would seem to be the most productive with regard to your evolutionary development. You may find with the emergence of the Sun into your opposite sign, taking place on May 21st, that partnership plays a powerful role in helping you to more completely define your sense of your own identity. What is becoming more and more apparent is that you feel unsatisfied unless you proclaim your most sincere beliefs and proceed to act upon them.

From May 1st to May 3rd, Mercury in Aries in your fifth house of creativity and good fortune, will square Saturn, the South Node of the Moon, and Pluto in Capricorn in the second house of money and finances, and simultaneously trine your ruling planet, Jupiter in Sagittarius. The month therefore begins with a call to either curb your spending, or to make whatever lifestyle changes you can, even if it means working less, in order to experience a higher level of happiness and freedom. With Saturn and Pluto both having recently turned retrograde in your second house, you are no doubt moving through a period of revision, contraction, or restructuring around your time, money, energy, and resources. The good news is that with Jupiter in your home sign until the end of the year, these changes are likely happening as you are simultaneously feeling the urge to free up more time and space to live as authentically as possible.

On May 4th, the New Moon in Taurus will fall in your sixth house of work, sickness, and service, bringing a productive but potentially burdensome or work-heavy Moon cycle to come. Health issues might occupy your mind, or exercise regimens or other day-to-day habits, and the positive effects of potentially making adjustments to these.

Between May 5th and 6th, Mars in Gemini in your seventh house of relationships will oppose your ruling planet, Jupiter, from its home sign in Sagittarius. Watch for energizing intellectual or ideological exchanges with others during this time, and be careful of a general aura of bravado or machismo that could easily infect and cause harm to yourself or others.

Between May 7th and May 8th Mercury will conjoin Uranus in Taurus in your sixth house of work, sickness, and service, bringing with it a moment of erratic but potentially paradigm shifting energy. You may find some helpful resources or technology coming to your aid right now, or you may find that you are seeking out alternative or even holistic modalities for the sake of further learning and study.

Between May 6th and the 10th, Venus in Aries will also move through squares to Saturn, the South Node, and a conjunction to Eris, and square with Pluto in Capricorn in your second house. This transit further emphasizes issues around money and finances, although perhaps with an added emphasis on relationships, the arts, women, sexuality, or even children.

Between May 10th and the 15th, the Sun in Taurus in your sixth house of work and service will make trines to the South Node, Saturn, and Pluto. The Moon in Virgo will also briefly make a grand earth trine from the tenth house of career on May 14th. Overall this period should be highly productive, yielding practical and beneficial results, even if the underlying theme still relates back to the contractive and transformative energy of Saturn and Pluto in your second house of income and expenditures.

On May 18th, the Full Moon will then fall in Scorpio in your twelfth house of self-undoing, dissolution, and surrender, while Venus also conjoins Uranus in Taurus in your sixth house of work and service. This Full Moon brings a very potent and heavy emotional energy with it, especially considering the presence of the Moon’s ruling planet Mars in the eighth house of death and rebirth and its subsequent square to Chiron, the Wounded Healer, in Aries. On May 22nd to the 24th, there is a deeply healing, if not corrective or instructive energy behind this transit. However, accessing its deeper meaning will require you to explore your own fears or resistance to change or growth.

Finally, from May 29th to the 30th, Mercury in Gemini in your seventh house of relationships will square Neptune in Pisces in your fourth house of home, family, and foundations, while also opposing your ruling planet, Jupiter in Sagittarius. The possibility for a unique intellectual and spiritual synthesis is likely presenting itself right now as you are seeking to reconcile differing polarities within yourself and likely within your relationships. It’s quite possible that the conversations you are having right now will relate back to religious or spiritual karma that stems from your family of origin.