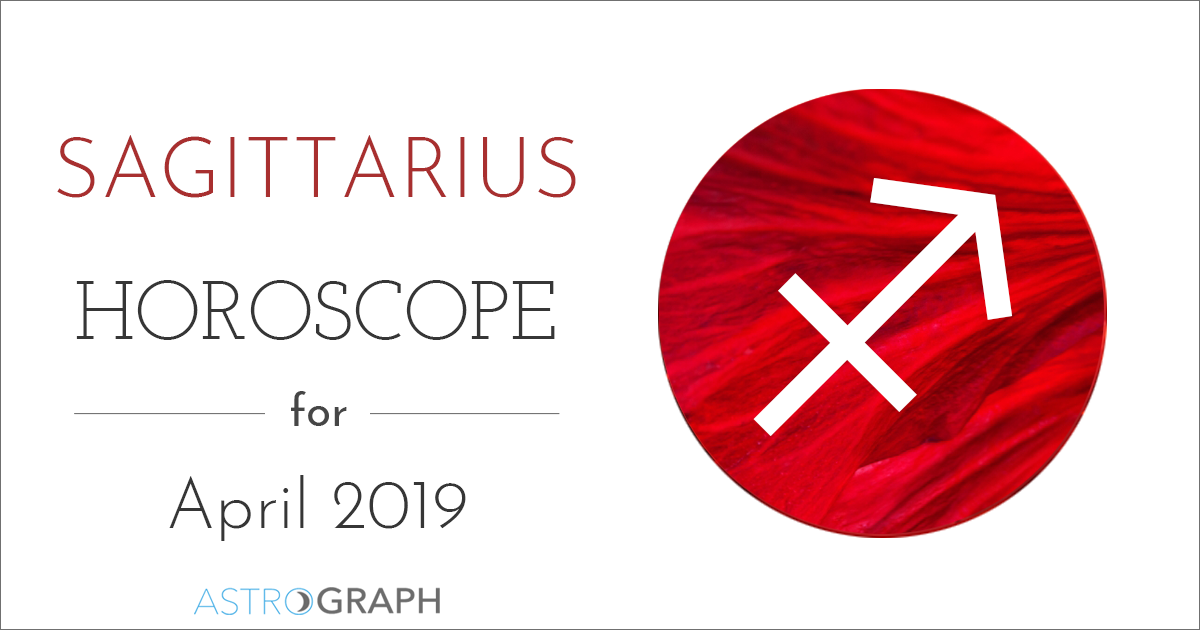 Posted on March 30, 2019 in Sagittarius |
By Henry Seltzer and Adam Elenbaas for ASTROGRAPH Horoscopes

This month represents an important fresh start for you, Sagittarius, although with definite a twist to the inside. Mystical realities continue to dominate, affecting your relationships and your professional stance. Right from the very beginning of the month, partners bring surprises that prove enlightening to the extent that you can remain open to novel reformulations of your existing worldview. Your self-expression is sizzling by the April 5th New Moon, although much of what ultimately motivates you comes from hidden places below the surface layers of your personality. This includes inner wounding that has been walled away – for years likely – behind psychological scar tissue, the result of childhood trauma. From your depths arise unexpected pathways forward. You find that your professional conduct and career orientation, and as well the way that you come across to others, is becoming a truer and more aware reflection of your actual values. This is your unstated goal, the intention of your Higher Self, and you are coming closer and closer to actually enacting it.

The month ahead features a long series of transits through Pisces in your fourth house of home, family, and foundations, each of which will also make contact to your ruling planet, Jupiter, in your home sign and first house of Sagittarius. The sequence begins with Mercury in Pisces making a conjunction to Neptune on April 2nd, followed by a square from Mercury to Jupiter in Sagittarius by April 12th. Venus in Pisces will then make a conjunction to Neptune on April 10th, followed by a square to Jupiter in Sagittarius on April 15th. The entire movement of planets indicates that you are seeking deeper healing and clarity or experiencing personal renewal or transformation in relation to the topics of home and family. Domestic routines and romantic feelings may also combine right now to create a more intimate and private atmosphere of intimacy and love at home. However, with Mercury turning direct and moving through a long-standing conjunction with Neptune, it’s important that you also make clear distinctions and rational choices, especially with your family members or within your most intimate relationships.

On April 5th, the New Moon in Aries will land in your fifth house of good fortune and creativity, initiating a creatively energized Moon cycle to come. The Sun will then make squares to Saturn and Pluto in Capricorn in your second house of money and finances, between April 10th and 13th. You may be at something of a crossroads right now. While the Aries Sun is asserting itself quite strongly in your creative house, bringing a creative wave of enthusiasm with it, the principled limitations from Saturn, and the transformative depths and power of Pluto in your house of money and resources are going to demand that you also take a hard look at finances and material resources. However, be careful not to get too stubborn or impulsive, and don’t try to immediately ram your way through whatever obstacles may appear.

By April 19th, with the harmonious Full Moon in Libra illuminating your eleventh house of friends, allies, and hopes for the future, you will more than likely find just the right people or groups to help you accomplish your goals. Or, at the very least, because the Full Moon in Libra is also making squares to Saturn and Pluto, it will help you to see the most diplomatic path around whatever resistance or setbacks you are facing.

Between April 19th and the 23rd, also, both Mercury and Venus will move through conjunctions to Chiron in Aries in your fifth house of creativity, children, and good fortune, bringing the potential for both healing and learning, especially in your relationships, or perhaps with your children (if you have any!). Watch for blessings coming from teachers and women or friends, especially those who may approach you with greater assertiveness. As a Sagittarius you are naturally wise and assertive, yourself, but try to listen to what others are bringing to you during this transit because it will likely bless you to hear what your friends, teachers, or loved ones have to say right now.

During the same time, on April 20th, the Sun will also enter Taurus and conjoin Uranus, until the 23rd, in your sixth house of work, sickness, strife, and service, bringing both disruption or unexpected events, as well as illumination, and clarity. Just remember, whatever pops up unexpectedly under a Uranus/Sun transit is also here to liberate and enlighten you. Keep that perspective, and what might seem like a difficult series of events may also turn into an opportunity to serve a higher cause or understand your higher purpose.

Finally, between April 25th and the 27th, Mars in Gemini in your seventh house of relationships will square Neptune in your fourth house of home and family, bringing themes of conflict, disruption, or action into both relationships and/or domestic matters. This is a great time to join with those you are close with in order to fight or work toward a higher goal or dream. However, you should also be careful of becoming a martyr for the people you are close with, especially partners or parents.