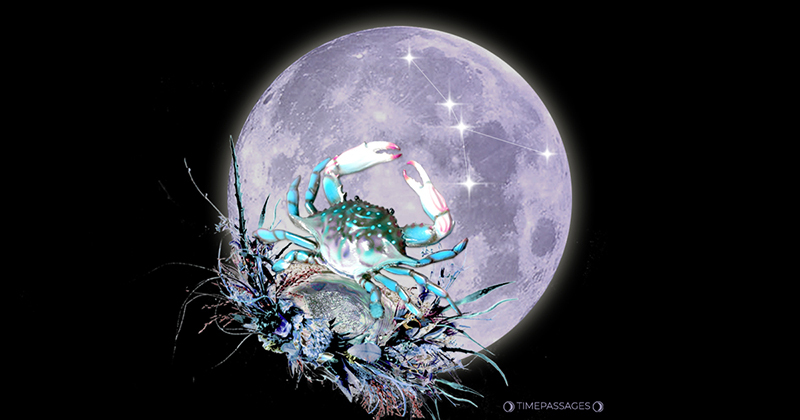 A Full Moon of Introspection, Missed Connections, and Unusual Insights

Posted on January 5, 2023 in Configurations |
By Henry Seltzer for ASTROGRAPH Horoscopes

The Cancer Full Moon comes along on Friday January 6th, at 3:08 PM PST, or 6:08 PM EST, late evening for Europe. This Full Moon, at 16 + degrees of Cancer, is rather amazing in its connection with the personal planet retrogrades of Mars and of Mercury that dominate the entire January month. As such, this Full Moon will emphasize the inward turning of this fraught time period when both Mars, for some two and a half months now, and Mercury, since December 29th, have been moving backward through the sky in their apparent geocentrically derived positions. Mercury moving backwards, as now, is associated with missed connections, mechanical breakdowns, and reversals of expectations. Mercury is actually nearing the Sun in this Full Moon, a degree away, one peak of the entire Mercury Retrograde period, with an excitation of its usual symptoms. In this Full Moon configuration also, Mars in retrograde motion, at 8 Gemini, is exactly semi-square to Eris, implying that whatever we attempt goes slowly but with a depth of passion that comes directly from core principles. What we engage to commit to at this moment has immense lasting and spiritual power and should be a long-term goal rather than any recently conceived idea.

The Mars retrograde is at an interesting moment in this Full Moon configuration as well. Mars at 8 Gemini, where it will stop dead still in the sky on January 12th, only moving ¼ of a degree between the 6th and the 12th, his station to direct motion, is currently in aspect to new planets beyond Pluto, also slow-moving, making a trine to Makemake in Libra, and a bi-quintile aspect to Haumea at the 0 degree mark of Scorpio. Mars also makes a bi-quintile to the Full Moon Sun. This indicates, as we meditate on our human condition, an internal focus on connection to Nature, and to natural law, right action and right relationship, and an almost activist sense of moral compass.

In this January 6th Full Moon also, the Sun trines Uranus in Taurus, suggesting astonishing or sudden events and surprise enlightenment. Uranus was featured in the November 8th eclipse that heralded the progressive mid-term election results then in this country, so we might look for a similar theme as the 2023 year gets underway in the U.S. capital.

As mentioned above, Retrograde Mars is precisely semi-square to Eris, and this brings in the idea of action that is motivated from our very depths, our own unique set of moral precepts. Eris is a warrior archetype in support of what we believe at our core, whatever that may represent to us, upon deep reflection. With Eris also prominent in this Full Moon, being sextile Saturn, and semi-sextile Neptune, that is, Neptune at the midpoint of Eris and Saturn, we can see in the symbolism an abiding and spiritually motivated stance that we might each be able to take, that we will act upon our own sense of what we hold inside. This reminds us again of the Margaret Meade quote: “Never doubt that a small group of thoughtful, committed citizens can change the world: indeed, it’s the only thing that ever has.”

If we can have the courage of our convictions, understand what it is that we can unequivocally support, no matter what, and stick to that notion in the face of everything, then we, each one of us, will have done what we can do to save ourselves. And in doing so, we also may be able to save this entire Western culture, at its turning point, from its more unfortunate excesses in terms of lack of direction or in any kind of moral commitment. 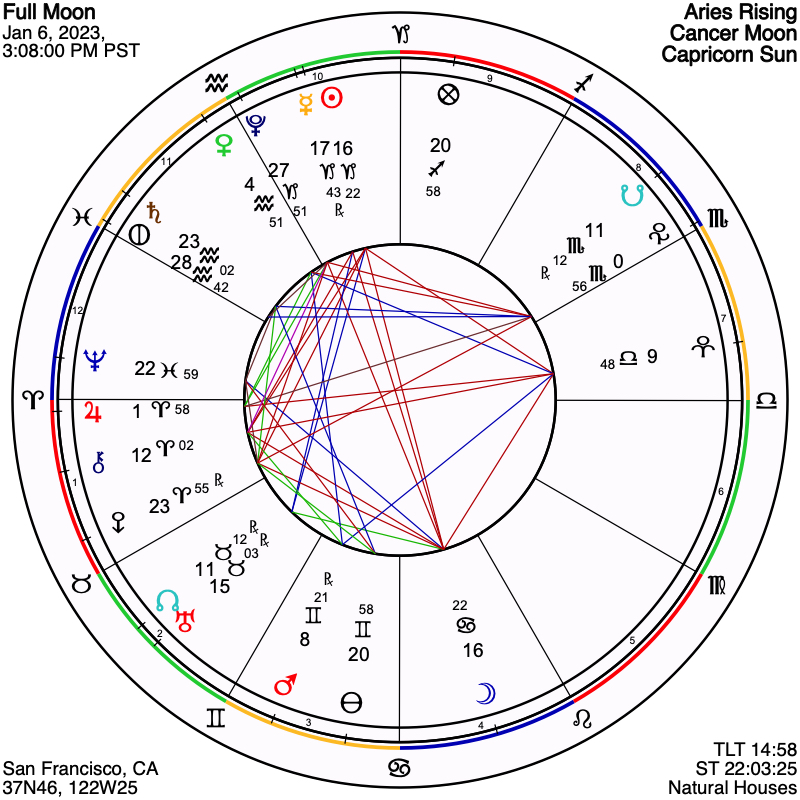