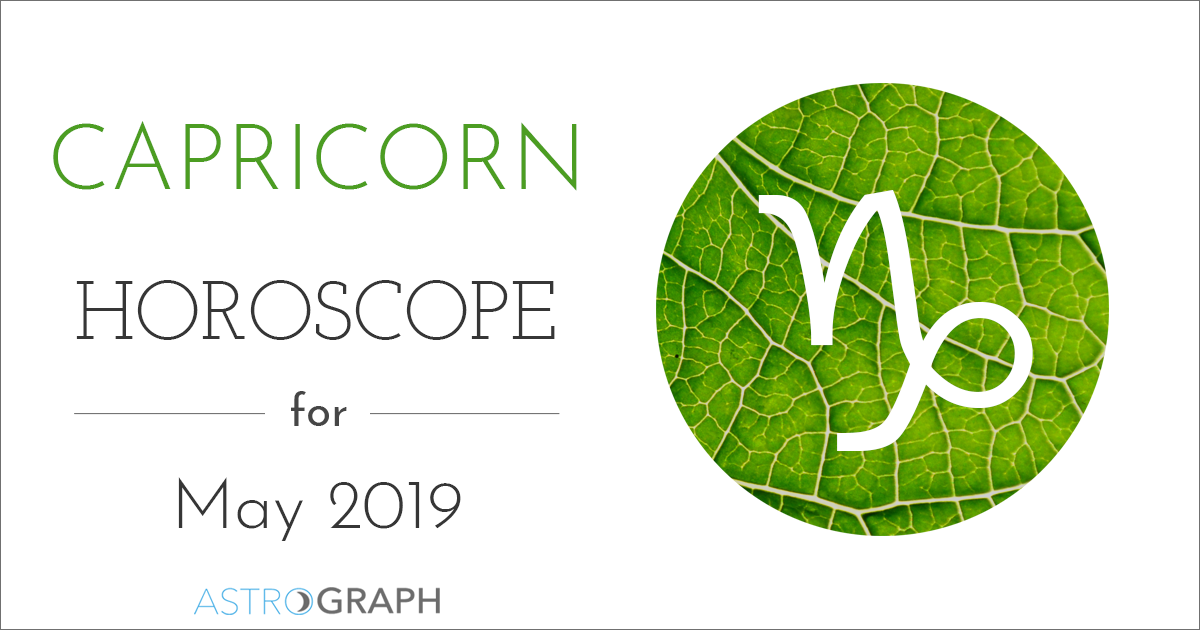 Capricorn Horoscope for May 2019

Posted on April 30, 2019 in Capricorn |
By Henry Seltzer and Adam Elenbaas for ASTROGRAPH Horoscopes

This is another month of development and growth for you, Capricorn. Over prior weeks and even months, you have been through the wringer, dealing with the realization that something fundamental needs to shift within you for your yearnings for grand accomplishment to be truly satisfied. Your very identity is on the line, and has been evolving, as you entertain novel ideas and flashes of inspiration for productions and creativity that are more than a little wild. Your self-expression is an important focus now, with inspiration coming your way that you do well not to stifle or ignore. It is the transformation of your very identity, and by extension the persona that you project, that is at stake. This month you are reaching one significant crux in this journey of discovery. Branching out in terms of your artistic possibilities must feel a little scary, at times, but is vitally necessary if you are to fully inhabit the life path that your higher Self has long intended for you to follow.

Between May 1st and May 3rd, Mercury in Aries in your fourth house of home and family will make squares to your ruling planet, Saturn, as well as the South Node of the Moon and Pluto in your first house. Mercury will also simultaneously conjunct Eris and make a sextile to Mars in Gemini in your sixth house of work and service and a trine Jupiter in Sagittarius in your twelfth house of dissolution and surrender. Given that both Saturn and Pluto recently turned retrograde in your first house, you are likely going through a period of personal contraction, depth, breakdown and restructuring. This transit may add an aura of mental stimulation and busyness, perhaps specifically related to your home, property, or domestic life. Between May 6th and May 10th, Venus in Aries in your fourth house of home and family will also square Saturn, the South Node, and Pluto, while also making the trine to Jupiter in Sagittarius. So, for the first ten days or so of the month, you should be on the lookout for a wave of fiery energy on the home front, and in your intimate relationships, which will likely require most of your time and energy. It may not feel like the world’s most convenient timing but be careful not to react from an overly rigid or intolerant place to whatever is demanding your attention. Taking your time right now with pressing issues on the home front will lead to positive results later in the month.

On May 4th, the New Moon will fall in Taurus in your fifth house of creativity, children, and good fortune, placing an emphasis on these generally positive themes in the lunar cycle ahead. You will have tons of energy throughout the month for expressing your creative and artistic self.

Between May 5th and May 6th, Mars in Gemini in your sixth house of work and service will oppose Jupiter in Sagittarius in your twelfth house of dissolution and surrender, and then on May 7th and 8th, Mars’ ruler, Mercury, will conjoin Uranus in Taurus in your fifth house of creativity. This sequence points to a more intense mental and intellectual energy, culminating in a creative breakthrough, an epiphany, or a revolutionary new idea or learning experience. You should also be careful of mental or communicative bravado or machismo, risk taking, or some element of aggression that becomes enflamed around this time. There is a fine line between the intellectual brilliance of this transit and a tendency toward recklessness.

Between May 10th and the 15th, the Sun in Taurus will make trines to Saturn, the South Node, and Pluto in Capricorn in your first house, and on May 14th the Moon in Virgo in your ninth house of the higher mind will briefly join the mix, creating a grand earth trine. This should be a highly productive period, motivated by the desire to make positive and practical changes based on both the unique creative insights you are receiving right now, as well as a more complete philosophical change you have been undergoing since Saturn first entered Capricorn at the very end of 2017.

On May 18th, the Full Moon in Scorpio will land in your eleventh house of friends, allies, and groups, while Venus will also conjoin Uranus in Taurus in your fifth house of creativity. While the Moon cycle began with an emphasis on the house of creativity, happiness, and good fortune, and while Venus’ conjunction to Uranus signals more of the same creative revolution taking place in your life right now, the Full Moon in the sign of its fall, in the house of friends and allies, suggests that the changes you are trying to make might require a deeper level of death and rebirth in relation to your friends, social circles, or among colleagues. It’s almost a guarantee that when we make significant personal changes in our lives, that some people around us will resist the changes, or that obstacles will pop up. What matters most is that you believe in the creative changes you are trying to make right now, regardless of what others might think or say about it!

With the ruler of the Full Moon, Mars in Cancer, in your seventh house of relationships squaring Chiron, the Wounded Healer, in Aries in your fourth house On May 22nd to the 24th, it’s also safe to say that the changes you are trying to make will also bring you back to where everything started this month, to your home life or your intimate relationships and the needs or demands being placed on you from others.

Finally, from May 29th to May 30th, Mercury in Gemini in your sixth house of work and service will square Neptune in Pisces in your third house while also opposing Jupiter in Sagittarius in your twelfth house. Once again, it’s clear that the changes you are trying to make are inherently about a totally different philosophical or spiritual approach to life that you are trying to implement, likely in response to recognizing that things simply cannot go on as they have been any longer. The month closes out by offering you an opportunity for a philosophical compromise or synthesis, an opening of deeper empathy and compassion in your everyday environment, and an intuitive level of guidance that you can follow in order to continue making the changes you need to make in the most enlightened way possible.