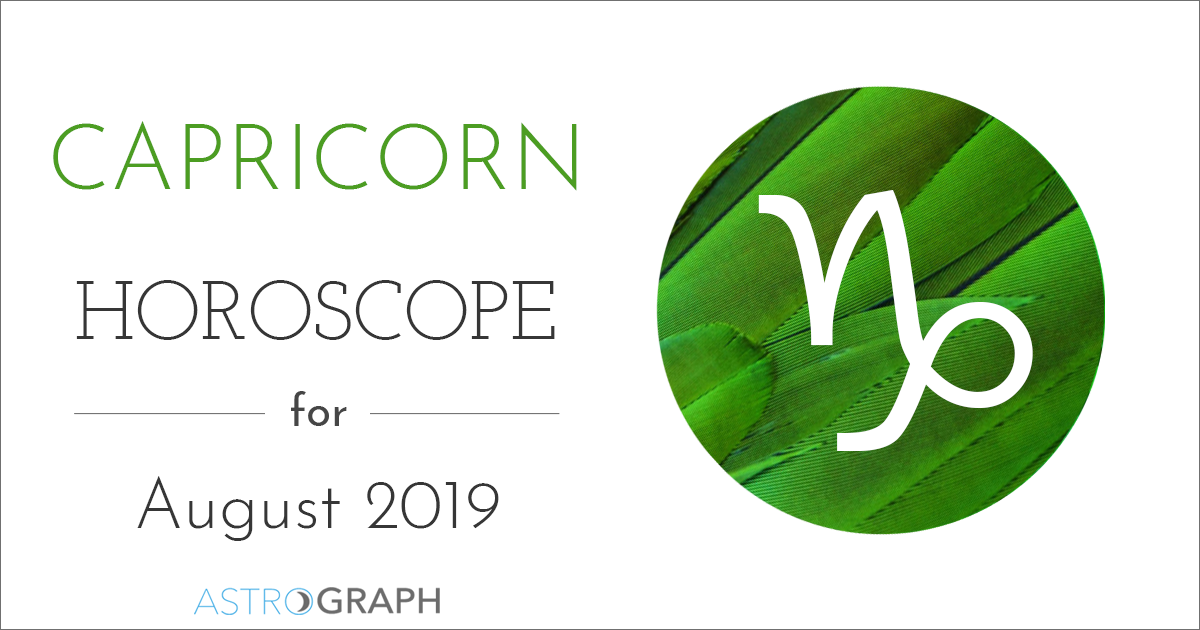 Posted on July 31, 2019 in Capricorn |
By Henry Seltzer Adam Elenbaas for ASTROGRAPH Horoscopes

This is a changeful month of new realizations, Capricorn. Your very sense of yourself – of who you are and how you come across – is continuing its long metamorphosis, moving currently in a way that involves both inner and outer. In the second full week of the month, beginning on August 7th and continuing through the weekend of the 10th-11th, benevolent Jupiter is stationing to forward motion in your sector of unconscious process and inner work, while making a close aspect to your ruler, Saturn, in your sector of evolving identity and self-concept. Simultaneously, from the very beginning of the month, exercises in intimacy shake you to the core, in a good way, while your partnership dynamics in general are up for revision and review. This is a potentially very positive and transformational month, when relationships, aesthetic self-expression, and your outer world persona are each a strong focus. You are headed toward an apotheosis by the timing of the final week of the month, when everything becomes magically clear.

The month begins just after a New Moon in Leo in your eighth house of death, rebirth, and other people’s resources, and just as Sun, Moon, and Venus in Leo are making a square to Uranus in Taurus in your fifth house of joy, creativity, and good fortune. Deeper and potentially heavier changes, as is typical of the eighth house, may be pronounced this month, but with Uranus electrifying the eighth house themes of death and rebirth from within your house of good fortune, it’s likely that these changes will be welcomed and may even lead to greater joy and creative freedom. These changes will be stimulated quite quickly to start the month but will take the rest of the month to integrate and play out.

Late on July 31st, also, or early Thursday, August 1st, Mercury in Cancer will also turn direct in your seventh house of relationships after several weeks of being retrograde. If your relationships, or a partner, have been experiencing emotional or even family-related hardships, blockages, or delays in the past month, things may start to recover or improve. Expect that clear and emotionally honest communication in your relationships will be a focus in the weeks ahead as Mercury also makes its appearance now as a morning star!

Between August 5th and August 8th, Venus and the Sun will make trines to Jupiter in Sagittarius in your twelfth house, delivering deep insights and guidance to you around love, friendships, beauty, and even sexuality. Your shadows, or the shadows of a partner may also be coming to life right now, and so it’s important that you stay aware of what deeper issues are at work within your relationships. You might need to avoid the temptation of over-indulgence right now, as well.

On August 11th, Mercury enters Leo and moves into your eighth house, while Uranus turns retrograde in your fifth house of joy, creativity, children and good fortune, and while Jupiter turns direct in your twelfth house. The topics of joy, creativity, recreation, and pleasure are important right now. You may be feeling the need to rebel or act out, but you should be especially careful of the potential for self-destructiveness. As a Capricorn, it may be easy for you to repress your own needs, but you should also be careful of the potential to swing in the opposite direction. If your lid has been on too tight, you’ll want to take it off carefully rather than letting it burst.

On August 15th, the Full Moon in Aquarius falls in your second house of income and expenditures, emphasizing a peak moment of importance for you around the topics of work, business, bills, and money. With the Full Moon’s dispositor, Saturn, your ruling planet, in your first house, you might be questioning your deeper values right now or asking yourself how much you are willing to suffer or pay the price personally for gain financially or professionally.

On August 18th, Mars will enter Virgo and move into your ninth house of faith and the higher mind, emphasizing a period of adventurous and critical thinking, the questioning of beliefs and ideals, learning and study, and possibly even travel abroad. There is also a potential for religious, spiritual, philosophical, or political conflict affecting you personally in the month to come, as Mars, god of war, makes its way through your ninth house.

Then on August 23rd and 25th, Venus will conjoin Mars in Virgo in your ninth house, followed by Mercury entering Virgo on August 29th, and a New Moon in Virgo on August 30th. This sequence points to a very pointed emphasis on the topics of learning, faith, travel, religion, the law, philosophy, and teachers in the lunation cycle to come, during September. There is a wave of higher guidance coming through for you with these transits, and taking advantage of it will mostly rely on your ability to remain open, receptive, and gentle with yourself and others, as opposed to aggressive, avoidant, or critical.