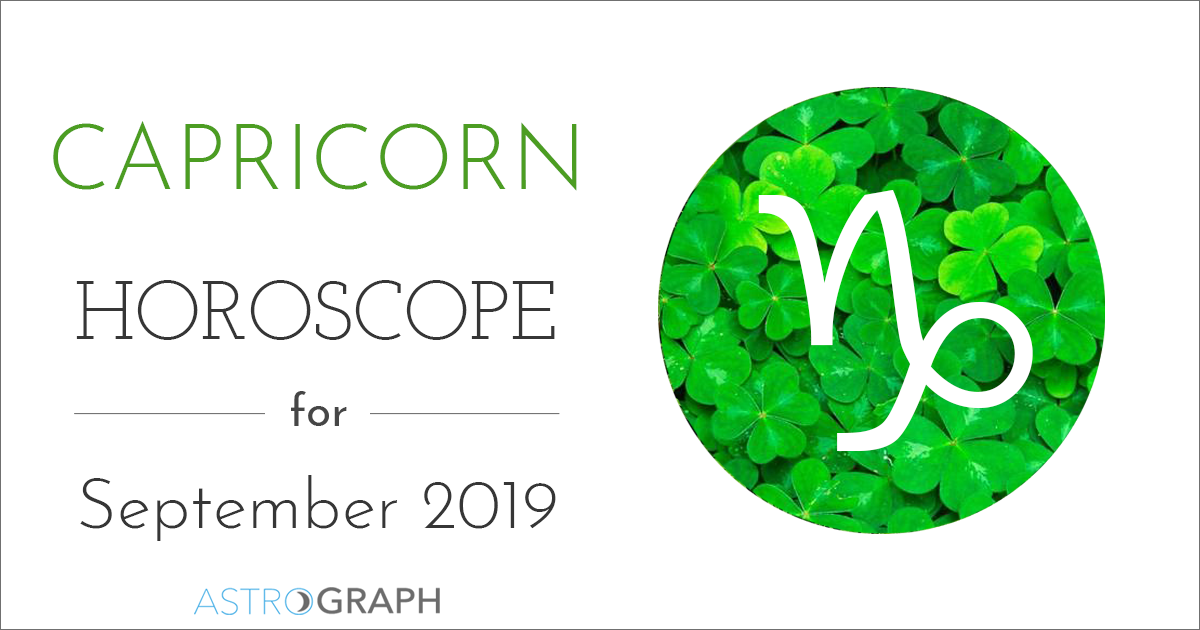 Posted on August 31, 2019 in Capricorn |
By Henry Seltzer and Adam Elenbaas for ASTROGRAPH Horoscopes

This is a month of breakthrough for you, Capricorn, although it may be equally true that nothing concrete gets concluded. You are delving into mysteries that underlie surface layers and finding not answers, but further questions. Inner wounding might also come up for you, for recognition and moving beyond it. Novel realizations from the very onset of the month have you focused on examining your sense of identity in a surprisingly helpful manner. You are coming into yourself in a new way, preparing a decidedly different basis for decision-making. Even without anything getting resolved, the journey itself is quite valuable. Certainty must most likely be abandoned in favor of having the internal confidence to be willing to explore, so that a “maybe yes, maybe no” attitude works wonders. The net result is that you will eventually ease into confronting your true bottom line, whatever it is that you can articulate from your depths and proceed to act upon, as you prepare for a magical and inspiring October.

The month begins just as Mercury in Virgo in your ninth house of the higher mind, faith, and long journeys is making a trine to Uranus in Taurus in your fifth house of joy and creativity (September 1st). At the same time, Mars will be at the heart of the Sun (cazimi) in Virgo, as well (September 2nd). You are also riding the wave of the recent New Moon in Virgo, from August 30th, that featured five planets in that sign, and thus in your ninth house, so that all these areas are highlighted for you throughout the month. With Uranus involved, this also points to a personal desire you may be feeling for release or liberation from the past, or from the known, or the desire to learn something new or to pursue a new form of spiritual practice. The need for creative, educational, or spiritual learning is pronounced this month, but be careful that you do not go to extremes with your thinking. Enlightenment is a step by step-by-step process, and each step matters just as much as the next!

Between September 2nd and the 4th, Venus in Virgo in your ninth house will then oppose Neptune in Pisces in your third house, amplifying the division between higher thoughts and mundane responsibilities, between romance, love, and transcendence and limitations, inhibitions, or material anxieties. Working through this tension is a necessary part of this month’s emphasis on your spiritual or intellectual development and growth, so don’t shy away from the more vulnerable or romantic feelings that might be coming up right now.

Between September 8th to the 12th, the Sun and Mars in Virgo will square Jupiter in Sagittarius in your twelfth house of dissolution and self-undoing. The exploration of our faith, beliefs, or inner life may have you feeling both inspired but also adrift, confused, or distant from others or the world around you during this transit. Remember that being in service to your ideals right now likely means finding ways of being “in the world but not of it.” As a Capricorn you are shrewd and determined enough to find a way of translating your experiences and wisdom gained into solid plans and actions.

Between September 13th and 14th, Mercury and Venus will conjoin in Virgo and then move together into Libra, where they will enter your tenth house of career. You may find that contracts, negotiations, or work relationships are harmonious and smooth during this time, and that agreements can be easily reached just as problems or misunderstandings can be easily fixed.

On The late evening of September 13th, the Full Moon in Pisces will fall in your third house of the mind, in a close conjunction with Neptune. Mars is also quite closely opposed to Neptune at this juncture. Like previous transits this month, the Full Moon highlights the mental and emotional longing you might be feeling right now to explore other worlds, to find the spiritual within the mundane, or to possibly escape something undesirable in your immediate environment that is constantly draining you. Whatever the case might be, just remember to find the balance between the ideal and the real as you seek to integrate these energies.

Between September 21st and 22nd, Jupiter in Sagittarius in your twelfth house of self-undoing and dissolution will square Neptune in Pisces in your third house of the mind. For the past year you’ve been exploring the role of teachers and wisdom in your everyday life, perhaps seeking out answers to your doubts, or learning to incorporate new lessons. As Jupiter makes its final square to Neptune, the opportunity for you to gain a deep level of insight into yourself and the world around you is being offered to you. Just remember that it will take time for these insights to translate into the changes you might be longing for.

On September 23rd, the Sun will pass through the gateway of the Fall Equinox and move into Libra in your tenth house of career, followed by a New Moon in Libra on September 28th. With Venus and Mercury in Libra also approaching squares to Saturn and Pluto in your first house, the end of September and much of October place you at a personal and professional crossroads. You may be faced with some difficult, but healthy and necessary, choices to make. Be careful of being either overly diplomatic and compromising or overly rigid and self-determined. This should help as you deal with October’s astrology!