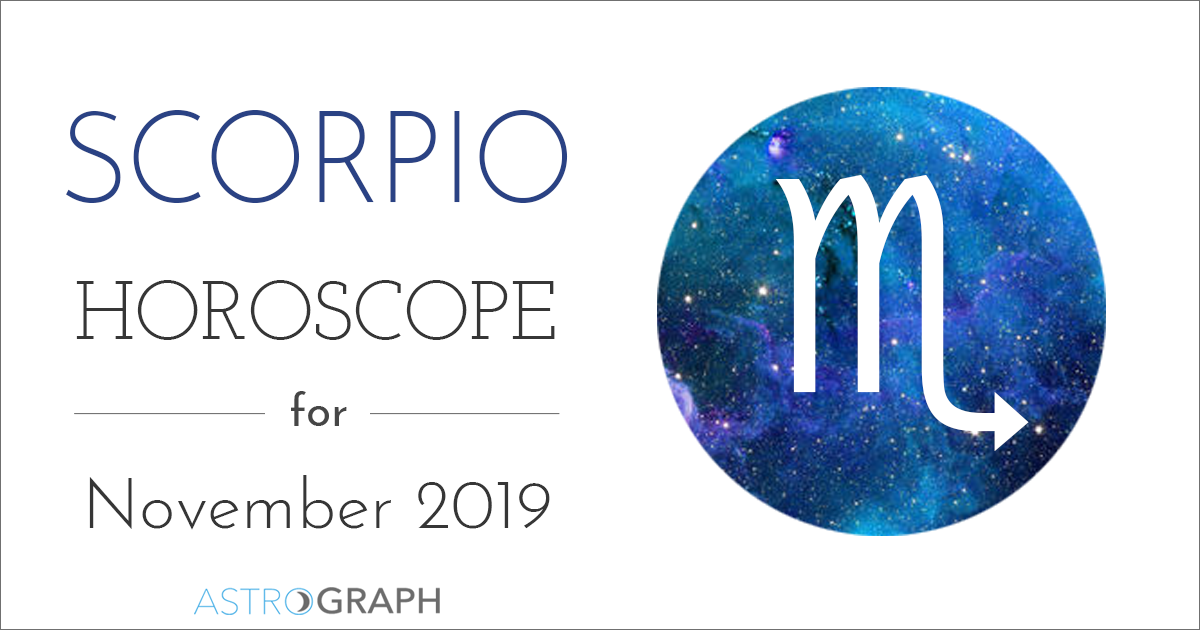 Posted on October 30, 2019 in Scorpio |
By Henry Seltzer and Adam Elenbaas for ASTROGRAPH Horoscopes

This is another wild and crazy month for you, Scorpio, with an enormous focus on your evolving identity. If you can stay centered, in the midst of a somewhat trying time, great rewards are still possible. A better understanding of who and what you really are is coming to you over the course of November as a result of a series of life events, and your introspective responses to these. These involve important partners as well as your own internal development. Your inner world is active now and giving your creativity a boost in quite a mystically inspired way, all part of an ongoing transformation taking place at the core of your personality. There will be innovations and unexpected changes of directions in new or existing relationships, so that it is best to be prepared for anything. You will also want to avoid knee-jerk reactions or judgment, staying as open as you can to possibility. As a result of looking inside, what is also shifting dramatically is your mission of service to the surrounding collective.


The following was written by our resident monthly columnist Adam Elenbaas of The Nightlight Astrology School in his final month with us. Adam has decided that other obligations of his must take precedence. We are grateful for his steady support of our astrological content for the past two years!

The month begins just after a New Moon (from October 27th) in your home sign of Scorpio opposed Uranus in Taurus in your seventh house of partnership. The existing shakeup around your relationships and social life is thus continuing into the month of November, with a special emphasis on the need for greater personal freedom within the context of your social life or personal connections.

Mercury is also retrograde to begin the month in your home sign of Scorpio. Don’t be surprised if the next three weeks is comprised of one personal revelation after another, and don’t be surprised if the light bulbs going off for you now will require of you that you stretch mentally or be required to make some challenging decisions. If you haven’t been real with yourself lately, this retrograde will let you know!

Between November 1st and 6th Mars in Libra in your twelfth house of dissolution and self-undoing will square cathartic Pluto in Capricorn in your third house of the mind. Be careful that you aren’t forcing yourself to learn something the hard way right now. If you are at all trying to avoid or deny whatever facts or inner knowing is present right now, you will likely suffer because the square to Pluto will not let you out of this transit without exposing the darkness you might be avoiding. On the other hand, if you are patient and discerning right now, you will likely find the courage and mental clarity to do the right thing.

Between November 6th and 9th, the Sun in Scorpio will make a trine to Neptune in Pisces in your fifth house. This is a fertile and highly creative moment. It’s a good time to set new intentions or to step forward with a creative project. You are ready to be seen by others, or to birth a new vision nor imaginative idea into the world.

On November 12th, the Full Moon in Taurus will fall in your seventh house of relationships, emphasizing the importance of stability, nurturance, simplicity, and peace in your relationships. It may be tricky to find the right balance between self-focus and the needs of a partner right now given the equal amount of energy still being emphasized in your first house and home sign.

Between November 11th and 15th, Venus in Sagittarius in your second house of income and expenditures will make a square to Neptune in Pisces in your fifth house of creativity and joy. This is a romantic transit. It’s a good time to take in a live show or performance, to spend money on something creative, or to explore your chemistry with someone new. At the same time, be careful that you aren’t overindulging or overspending because Venus and Neptune can easily tempt you toward escapism and poor judgment.

On November 20th, Mercury will then turn direct in Scorpio, bringing with it a moment of personal clarity and redirection. Then, just after Mercury turns direct, Mars in Scorpio will oppose Uranus in Taurus on November 24th to the 26th, further emphasizing a moment of breakthrough in your relationships. The need for greater personal freedom and autonomy is going to be incredibly strong all month long, and it all culminates right here!

Finally, between November 22nd and 25th, Venus and Jupiter will conjoin in your second house of money and resources. This is an auspicious transit that will likely bring growth and expansion financially or in relation to your career. It’s also a great time to find allies or partners in business. The only beware here is to avoid overspending. While Venus and Jupiter mostly promise expansion and growth, they can also indicate the potential for overdoing things.

Finally, on November 26th, the New Moon in Sagittarius falls in your second house as well. Following just after the expansive and beneficial conjunction between Venus and Jupiter, this New Moon picks up on the same note and emphasizes the same themes of growth and abundance for the entire lunar cycle to come, reaching to the final week of December!