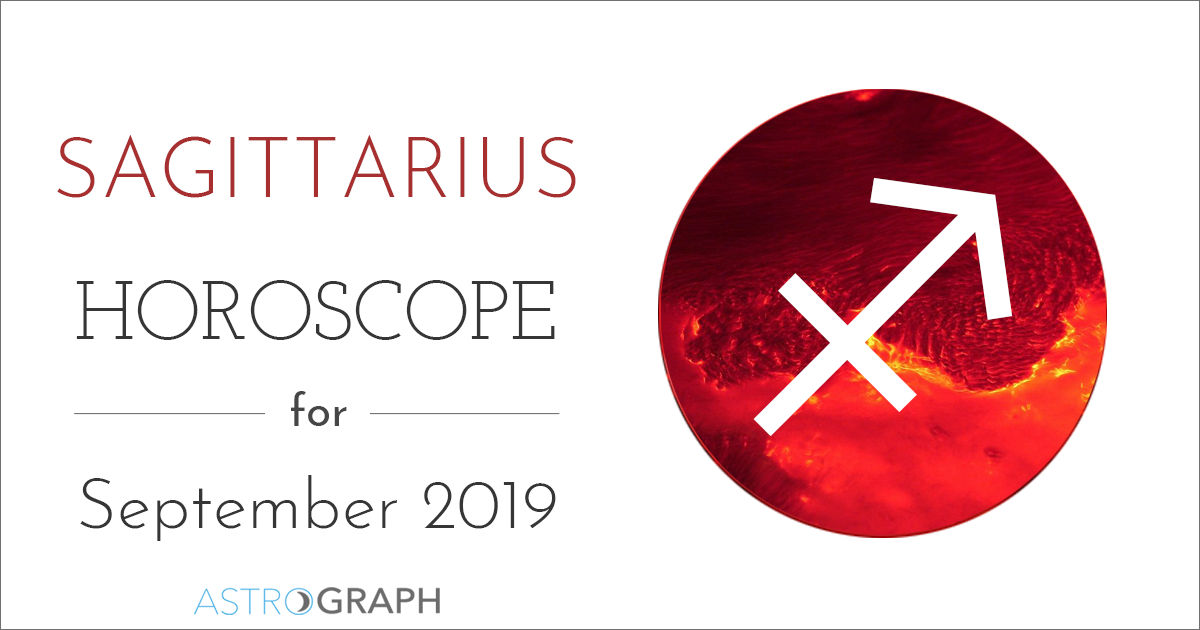 Posted on August 31, 2019 in Sagittarius |
By Henry Seltzer and Adam Elenbaas for ASTROGRAPH Horoscopes

This is another rather intense month for you, Sagittarius. You might feel as if acting out a movie, or a morality play, of joy versus worry, or of light against shadow. Each side is important for the result, which is intended to be continued development toward your most authentic version of yourself. As you are voyaging out past previous high-water-marks, you also must combine optimistic assessments with a more studied formula of recognizing the inherent limitations of your situation and producing with respect to that more complete understanding. While your enthusiasm for professional goals and outer world productivity is at a record high right now, you must also pay close attention you what is happening deep inside you. Your creativity is flourishing and yet there are also the whispers of past trauma that could be holding you back from its fullest expression. You must in the end be intent on achieving rather than the best possible result, the best result that is actually possible. ,


The Month gets started on September 1st and 2nd just as Mercury in Virgo in your tenth house of career makes a trine to Uranus in Taurus in your sixth house of labor, sickness, and service, and just as Mars moves into the heart of the Sun (cazimi), while also transiting through Virgo in your tenth house. The recent Virgo New Moon, from August 30th, was a powerful one, and strongly placed, for you, in your tenth house. You may find a wave of inspiration and empowerment coming to you in terms of career and profession right now, or perhaps a revolutionary new way of doing your work is being implemented or tried on for size this month. You may also find that you are feeling more energized and productive than usual. You should be sure to take advantage of it, especially given that your ruling planet, Jupiter, only has a few more months left in your home sign (where it is has been providing you with opportunities for personal growth and an increased sense of confidence since last Fall).

Between September 2nd and 4th, Venus in Virgo in your tenth house of career will then oppose Neptune in Pisces in your fourth house of home, family, and parents. Watch for a productive but intense level of creative, romantic, or even sexual tension existing at work right and in your relationships. You may also feel pulled between obligations or activities at work and at home or within your family.

Between September 8th and 12th, the Sun and Mars in Virgo will square Jupiter in Sagittarius in your first house. This should be another moment of great personal and professional invigoration and productivity. Just be careful that you aren’t overdoing things or getting puffed up as this transit could also create an aura of grandiosity or arrogance.

Between September 13th to the 14th, Mercury and Venus will conjoin in Virgo and then move together into Libra and move into your eleventh house of friends, groups, and allies. Watch for professional and social alliances to be formed during this time, or for challenging relationship dynamics at work to get sorted out. It’s also a great time for negotiations, for new design ideas or relationship strategies.

On The late evening of September 13th, the Full Moon will fall in Pisces in your fourth house of home and family, in a close conjunction with Neptune, emphasizing family karma and the deeper emotional or even religious/spiritual dimensions of your home and family life. Because Mars is also closely opposed to Neptune in this Full Moon, there could also be illusions or confusion to deal with in the family scene, or with regard to career goals or decisions.

Between September 21st and 22nd, your ruling planet, Jupiter, will make its final square to Neptune after almost a year of dancing through a square with it. As you are growing and changing, you are looking to make substantive changes at the level of home, roots, or family. With this last pass you may be reaching a kind of grand synthesis or pleasing conclusion of some kind. However, it may require a leap of faith in order to put the vision you’re receiving into action.

On September 23rd, the Sun will enter Libra and your eleventh house of friends, groups and allies, as it moves through the gateway of the Fall Equinox. Along with the New Moon in Libra on September 28th, all signs point to the importance of your social life, groups, or even professional relationships in the month ahead. With the focus on the sign of the scales, you will also be visiting themes of justice, beauty, and fairness in the weeks to come.

Between September 25th and 26th, Venus in Libra in your eleventh house will make a square to Saturn in Capricorn in your second house of money and resources, just as Mercury in Libra is also squaring Pluto in Capricorn. Here you might be looking at making some deeper and more serious commitments financially or in relation to your business dealings. You may also be asked to give something or invest something to a group or organization. Whatever the case might be, you should weigh carefully what you have and what you are willing to give in relation to what you need, and what you really don’t need, from others. Making a difficult but wise choice now will save you from more stress later!

Finally, on September 28th, the New Moon will fall in the sign of Libra, therefore in your eleventh house of wishes and hopes, prospective plans, and group affiliations, adding emphasis on these areas of life as you prepare to enter the next month. Your personal evolution continues, and your plans continue to evolve. This will be true over the next thirty days of the lunar cycle, lasting almost through to the very end of October.