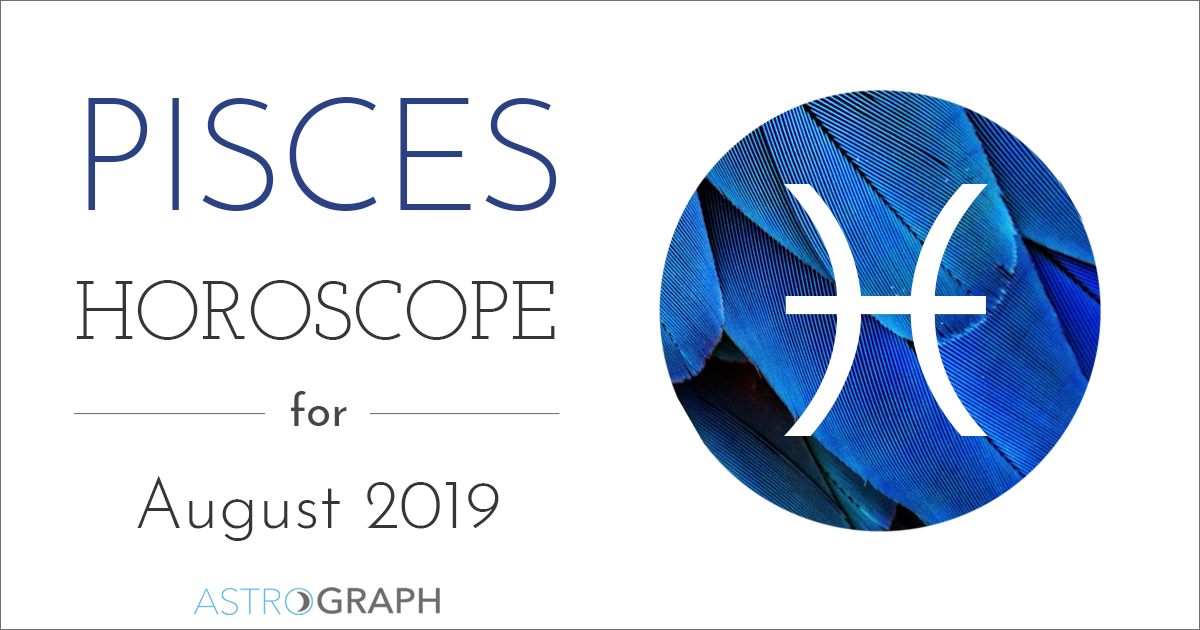 Posted on July 31, 2019 in Pisces |
By Henry Seltzer Adam Elenbaas for ASTROGRAPH Horoscopes

This month represents in many ways a continuation, Pisces, of what has already been started these past few weeks. You have been concerned with issues of service to others, day-to-day events and environment, perhaps workplace or health habit regimens, and while mulling these areas over are now placing significant focus on their evolving development. These ideas have long been fermenting far beneath the surface, engendering issues for your consideration, and the partial resolution of these looms this first half of August. Simultaneously, your public presence grows more significant, in a flowering of your creativity. Your work in the world is off to the races and you might have to adjust to being showered with awards and recognition. Upcoming agendas for events both close and looking ahead farther are evolving in a deliberate manner that also might be coming to a head this month and into the fall. In a strong inner urging , your deeper values have been making themselves known to you for transformation and charismatic actualization.

The month begins on the heels of a New Moon in Leo in your sixth house of work, sickness, and service, and right as Sun, Moon, and Venus in Leo are making a square to Uranus in Taurus in your third house of the mind, communication, and your immediate environment. It’s therefore quite possible that the month ahead will involve the unexpected disruptions of Uranus, which might could make it hard for you to find a rhythm or a natural and easy place of peace and harmony from day to day, perhaps especially within the context of your relationships. However, the good news is that whatever Uranus touches it always creates the potential for liberation and greater freedom and progress. So trust that whatever interruptions occur, because they are there to open you up to greater growth and happiness.

Late on July 31st, also, or early Thursday, August 1st, Mercury will also turn direct in Cancer in your fifth house after weeks of being retrograde. If you have been experiencing communication challenges at home, related to children, or even in relation to your parents or extended family, things should start to smooth out with Mercury moving forward again. Since Mercury is also appearing in direct motion now, as the month begins, it also wouldn’t be surprising to see good news such as a pregnancy announcement, other news coming from a family member, or what comes through might be a sense of emotional or psychological healing or renewal.

Between August 5th and August 8th, the Sun and Venus in Leo will make trines to Jupiter in Sagittarius in your tenth house of career. This is also welcome. Despite whatever sixth house hard work or labor you might be doing right now, what is also indicated here is the opportunity for great benefits and growth to come out of it. You may also meet an important ally, or even a new romantic connection, though you should be careful about opportunism right now, both within yourself and with those around you.

On August 11th, Mercury will enter Leo, Uranus will turn retrograde in your third house of the mind and communication, while Jupiter will turn direct in your tenth house of career. While the Mercury/Uranus dynamic that is unfolding right now looks innovative, bringing with it a mental burst of energy, due to Mercury’s presence in the sixth house, and Uranus in the third, this transit could also be somewhat erratic and unpredictable. The silver lining appears to be Jupiter turning direct in your tenth house, which would suggest that you are gaining momentum, or that something is improving or turning around for the better for you right now at work.

On August 15th, the Full Moon in Aquarius will land in your twelfth house, while its ruling planet, Saturn, is highlighted in the eleventh house of friends, allies, and groups. While you are going along nicely with the support of Jupiter in your tenth house this year, the question of your social life, or your professional relationships could be weighing on you a little heavier. This Full Moon may be especially potent as it causes you to reflect on what sacrifices or compromises you should or shouldn’t be making in relation to your friends and colleagues, or within various groups that you belong to. If your participation in a group is unhealthy, and you are staying in it because of what you think you will gain in the long run, you should perhaps be especially careful. Saturn’s conjunction to Pluto next winter could easily result in period of intense transformation related to friendships and groups, and it is likely to be much stronger and more challenging if you are avoiding making the changes you should now be making.

On August 18th, Mars will enter Virgo and move into your seventh house of relationships, indicating a period of deeper confrontation, analysis, and change in your relationships. Then, between August 23rd and 25th, Venus will conjoin Mars in Virgo, followed by Mercury entering Virgo on August 29th and a New Moon in Virgo on August 30th. September will thus feature the importance of your relationships, with the potential for both exciting new relationships coming in as well as for a deep level of analysis and reflection upon existing relationships. The main thing to be careful of here is the tendency for criticism, fear, worry, or perfectionism to stand in the way of uplifting, romantic, and creative connections that can also be made over the following monthly cycle.