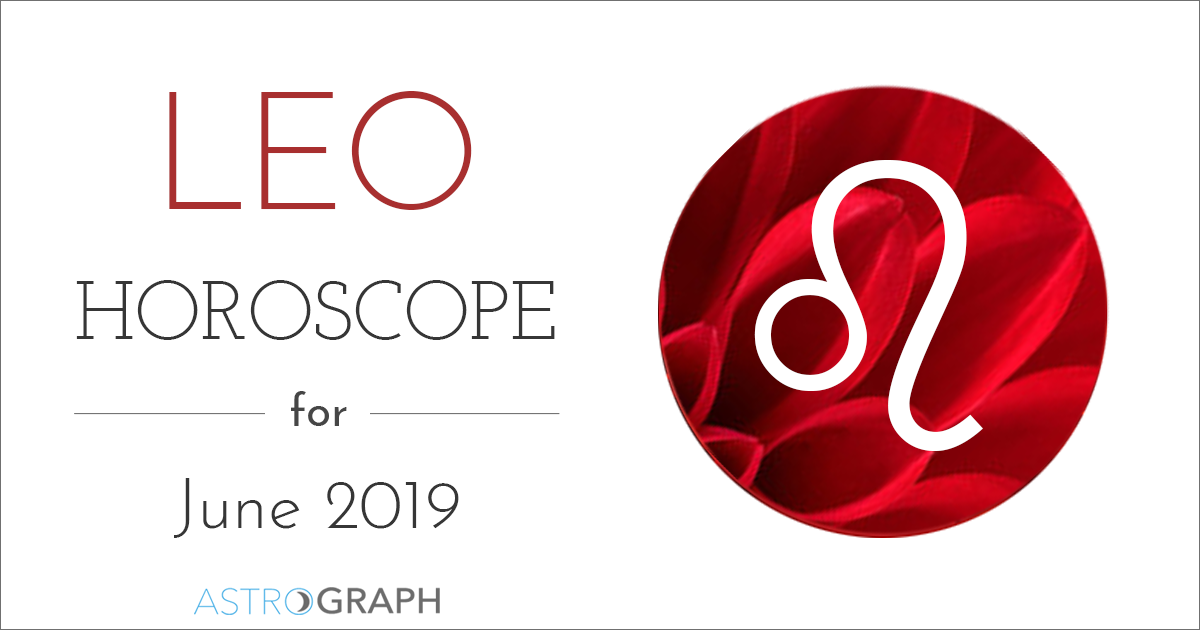 Posted on May 31, 2019 in Leo |
By Henry Seltzer and Adam Elenbaas for ASTROGRAPH Horoscopes

This is an important month of change that awaits you, Leo! The Gemini New Moon of Monday, June 3rd, is a noteworthy one in that it presages a concentration of will in the direction of future life goals and strategies, plus the societal connections that remain vital to your prospective planning. The coming Mercury Retrograde next month in your sign will give you loads of opportunity for introspection and course correction, and you thus might as well be prepared to begin to contemplate significant life changes. Your brain has lately been fully engaged and somewhat battered by concepts of service to the surrounding collective. In a kind of boomerang effect, this goes for yourself as well. All the transformational energies coming through you further your spiritual development, and the evolution of others, also. You might be quite keenly aware of partnership with almost everyone that you meet up with, as though they were band mates of yours, performing in the same orchestra.

This month is going to be a moment of breakdown or breakthrough for Leo’s, and it largely depends on whether or not you are willing to work through the challenges presented by both Mars’ transit through Cancer in your twelfth house, as well as a series of T-squares that find their focal point through Neptune in Pisces in your eighth house.

The big story of the month for everyone is the transit of Mars in Cancer, which will make oppositions to Saturn and Pluto in Capricorn between June 13th and June 21st. This transit will likely tempt you into displays of emotional volatility, manipulation, or self-destructiveness if you aren’t careful, or it could easily tax or drain you of emotional or physical energy by putting you into a pressure cooker of hard work and emotional intensity. On the other hand, you might be fighting or working on behalf of something you care about, or perhaps for those who are vulnerable or in need of support or advocacy. Be careful of martyring yourself right now, or of playing the victim or redeemer role, as it could easily drain you.

You should also be careful of gossip, backstabbing, betrayal, jealousy, and passive-aggressive dynamics in your relationships this month, as Mars in Cancer in the twelfth may sometimes point to the potential for “hidden enemies.”

The intensity of this sequence should be cooled down by the time of the Summer Solstice, at which point the life-giving Sun in the watery sign of Cancer will enter your twelfth house, bringing with it the cool breeze of clarity, healing, and emotional intelligence.

The other major dynamic of this month involves a series of T-squares from planets in Gemini in your eleventh house of friends, allies, and groups, to Jupiter in Sagittarius in your fifth house of good fortune, creativity, and children, and to Neptune in Pisces in your eighth house of death, transformation, and other people’s money or resources. The first of these T-squares is formed by the New Moon in Gemini on June 3rd. Then the Sun comes closer to recreate the T-square with Jupiter and Neptune between June 9th and 10th, and then the Full Moon in Sagittarius on June 17th, and then finally Venus in Gemini on June 22nd and 24th.

It’s an incredible series of astrological events, and yet some consistent themes emerge from it. First is a question about what kind of allies and resources, or friends and groups, you are hoping to benefit from, or creatively collaborate with, and second is a question about whether all of the allegiances you are seeking are healthy. With Neptune in the eighth house the theme of taking advantage of others, or being taken advantage of, may be pronounced. At the same time, the Jupiter/Neptune dynamic brings some powerful forms of support or creative inspiration through a series of challenging events, perhaps specifically related to friends, groups, or colleagues.

The temptation to get ahead right now at the cost of your deeper values or beliefs could present itself this month, and it would likely lead to a disaster considering Mars’ debilitated condition and opposing aspects to karmic Saturn and Pluto from the classical house of “self-undoing.” However, finding new hope and new faith, new allies and new friends, or some form of redemption from a time of despair, doubt, or difficulty, is also an equally valid and hopeful possibility.

Interestingly, at the very end of the month, on June 26th and 27th, the Sun in Cancer in your twelfth house will square the healing sage, Chiron, the Wounded Healer, moving through Aries in your ninth house of the higher mind. This perhaps brings up inner wounding in order that you begin to move beyond it, and for adding some invigorating insights and guidance that will help you to make the best use of the creative energy flowing through your chart this month.