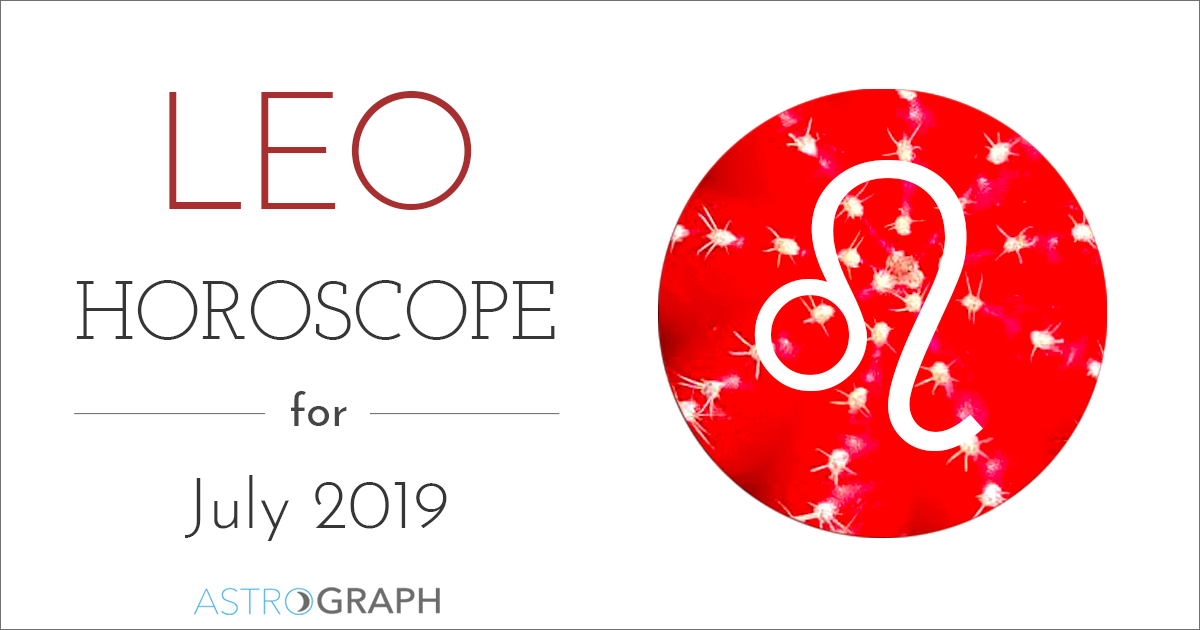 Posted on June 30, 2019 in Leo |
By Henry Seltzer and Adam Elenbaas for ASTROGRAPH Horoscopes

This is another interesting and stressful month for you, Leo. Issues of changing work priorities and unexpected career events continue to arise, while you are being nudged by the universe to consider the larger and more spiritual picture for all that goes on within you and outside of yourself. With the Solar Eclipse of July 2nd, you are drawn to inner realities that transcend considerations of the three-D material world. The first half of July, especially from the 7th to the 9th, is also somewhat fraught, as you confront inner wounding and deep intuitional information, indications that you do better in introspective contemplation, making friends with your own dark places, than in “real world” enterprise. The Mercury Retrograde period beginning on the 7th is in general is quite a strong one for you, continuing through to the very end of the month. You do well to seek out your most sincere values, remembering that in the final analysis it is only your evolutionary growth that ultimately matters.

The astrological month gets started on July 2nd with a Solar Eclipse falling in the sign of Cancer in your twelfth house of dissolution, surrender, and self-undoing. One of the traditional words traditionally used to describe the 12th house was “metakosmios,” which meant a place “between worlds.” The twelfth house is also associated with the labor that precedes birth. It’s therefore a curious place to find such a powerful new beginning. In the weeks and months to come. As the effects of the eclipse play out, you may find that you are entering into a transitional space, a time of purposeful wandering, or introspection, a time of traveling or of taking up the role of the stranger, hermit, or fool, going against the grain. You may also find that you are in the process of surrendering or releasing old patterns or outmoded ways of being, or you may find that you are in the painful process of birthing something new, the newness itself not quite there but closer and closer as the labor intensifies.

Between July 7th and 9th, Mercury will conjoin Mars in your home sign of Leo, just as Mercury turns retrograde. This is an especially potent Mercury Retrograde period for you this month. Given the conjunction of Mercury to Mars, you may feel called to assert yourself with greater force, to communicate something with more power, or to defend or advocate for ideas that you care about. The beware in this transit is the potential for a bullying or domineering quality to take hold of you, or for mental exhaustion or nervous irritation to skew your perceptions of reality for this brief period.

Between July 9th and 16th, the Sun in your twelfth house in Cancer will move through a series of oppositions to Saturn and Pluto in Capricorn in your sixth house of work, health and sickness, and service. And then, on July 16th, a Lunar Eclipse in the sign of Capricorn will also land in your sixth house. This eclipse suggests that the forces of necessity (Saturn), as well as the deep power of your unconscious (Pluto) are working through you and demanding that changes be made. The changes promised by this eclipse will almost inevitably require hard work and could be exhausting (the South Node of the Moon and Saturn figure prominently in the equation) but if you approach this work with a servant’s heart, then you will find yourself midwifing the birthing process and stepping into a more highly evolved version of yourself.

Between July 16th and the 21st, Venus in Cancer will then follow in the Sun’s footsteps and make a series of oppositions to Saturn and Pluto in Capricorn in your sixth house of work, sickness, and service. Venus is prominent in the configuration of the Lunar Eclipse, being in partile or same-degree opposition to Saturn. This series of oppositions extends the time of the above issues further into the month, with the addition of the Venus symbolism, implying that career choices or communicative concerns, or relationships in general, could come into play. The difficulties are there, but their damage is only apparent, and what will eventually emerge as a result will be a stronger and more vibrant version of you.

It is also possible that the presence of Venus highlighted in your sixth house may have the effect of a soothing balm, after the grittier oppositions and eclipses earlier in the month. While Venus’ oppositions do require a deeper look at relationships and friendships during this time, overall the goddess might also bring a harmonizing, fluid, and gentle energy to bear, emphasizing themes of grace, forgiveness, and emotional maturity. If you struggle with setting healthy boundAries in your relationships, this transit might also help you to do so.

Finally, on July 31st, the New Moon lands in your home sign of Leo in your first house, conjoined with Venus in Leo, while both square Uranus in Taurus in your tenth house of career. It’s a great time for a personal and professional change of pace. You may feel the need to reinvent some element of your wardrobe or physical appearance right now, or you might be feeling the need for greater personal freedom at work or in your relationships in the lunar cycle ahead. The only warning here is that you balance a desire for creative risk-taking with your inherent need to find validation from others. Given the eclipses you are just coming off from, it’s important that you be gentle and patient with the long-term process of growth and change you are entering into right now. Avoid the temptation to be so provocative or independent that you burn bridges or offend people.


With the massive changes that are happening now, I highly recommend that folks get a transit report tailored specifically to their chart for the most accurate description of what's in store for you in the months ahead.