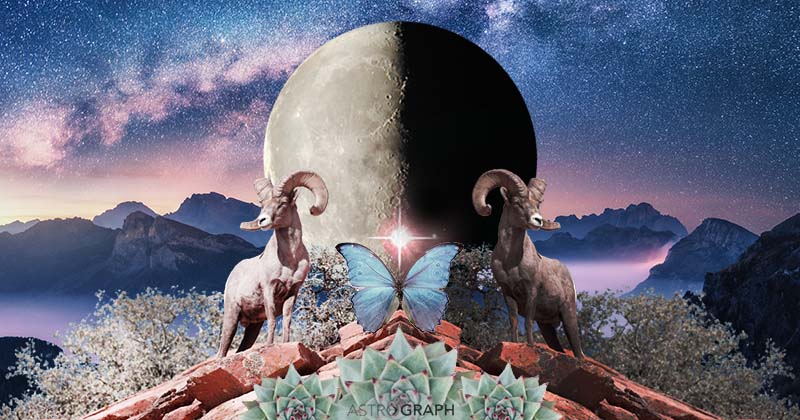 A Last Quarter Moon of Power and Potential

Posted on July 12, 2020 in Configurations |
By Leslie Benson for ASTROGRAPH Horoscopes

As the intensity of 2020 continues without letup, we, as always, look to these still quite potent astrological configurations to understand more about the underlying meaning of events and how they may continue to unfold. This evolutionary churning is vastly transforming to the collective energies and manifestations of our world, and to each of us individually. We are, after all, parts of the greater whole. On the afternoon/evening of Sunday, July 12th, we have a Last Quarter Moon in Aries, and this lunar phase arrives directly after the intense Eclipse Season that began on June 5th with a Full Moon Lunar eclipse, peaked on the Solstice of June 20th with a New Moon Solar Eclipse, and ended just last week on July 4th with another Lunar Eclipse and Full Moon. On the occasion of this Last Quarter Moon, we do well to look back over the past 37 days of the eclipses to reflect upon what healing has transpired, along with the ongoing massive transformation of our society, and of ourselves. We will also want to reflect on how we might integrate these significant shifts as we chart our course moving forward.

Mercury is now also in the very depths of its retrograde, having stationed direct in the early morning hours July 12th, which marks the time of Mercury’s slowest and most inwardly contemplative energy. That being said, there’s a lot of big movement and outward action-oriented energies in the air, as well, so that it may feel like a bit of a mixed bag – stop, go, hurry up and slow down. The last quarter lunar phase, in general, signals a time of letting go, as the Moon sheds its light and has waned half way between the brightness of full and the darkness of again becoming new. Perhaps this time may be seen as an opportunity to pause in deep reflection about what in our lives and in our world has shed away in the compost of the evolutionary process, and what is nascent within us, awaiting new birth. Judging from the current astrological configurations, the cosmic energies may be asking us to do this, not in a way that is passive, but in a way that is focalized and fierce, while being simultaneously compassionate for our own situation and that of others, therefore also soft and yielding.

This Last Quarter Moon falls at 21° of the cardinal sign of Aries, making a square aspect to the Sun in Cardinal Cancer. During Quarter Moon, the Sun is of course always square with the Moon. Now what is remarkable about this Last Quarter Moon is that the intense and deeply impactful conjunction of Pluto and Jupiter in Capricorn is making a tight opposition to the Sun and square to the Moon, making this into very potent T-square configuration, and one that includes the new planet, Eris, representing a Feminine Warrior energy in support of deep soul-level values. The Moon is very nearly conjunct Eris, with the latter located at 24 Aries and closely square Pluto, an aspect that has recently been quite active, and that continues to the end of the year. What this signals is multifaceted. The most vibrant and resounding energy within it all, as I see it, is about changing Power dynamics. This fraught timing is provoking in no uncertain terms the inherent human desire to be sovereign, at choice, and free. And it is also highlighting the rampant imbalance of power in our world. This astrologically inspired cosmic cauldron is stoking the fire to burn away that which keeps the human spirit in chains. It is daring the parts of us that cling to the old to let go, since all we can really do is face into a deeply unknown future, and, inevitably, to feel the terror, and the joy, and everything in between, that that unknown future could bring.

Pluto’s influence can get us in touch with the deepest seat of our personal power… it can also trigger the pain and fear that reside in our individual and collective memories about the places and times when we were subjugated and overpowered, when power was wielded to abuse us. This possibly includes when we, ourselves, misused our power over another. From a soul perspective, many of us – especially the Pluto in Scorpio Generation, or those with strong Pluto placements – have experienced over lifetimes many facets and expressions of this human debacle of skewed and distorted power dynamics. This is where Jupiter and Saturn, in conjunction with Pluto all during the last half of this year and especially in November, comes in. These energies can lead us to a broader vision, and hope for the future (Jupiter) and as well the sober minded sense of self-responsibility (Saturn) to confront the abuse of power in our world (Pluto), as well as that we endeavor to inhabit ourselves more fully in our essential selves, as aligned, empowered and trustworthy beings.

Lastly, it is important to mention that Mars is now traveling in his home sign of Aries, and therefore squaring the Capricorn placements. Because of his retrograde coming up in September, Mars will spend approximately six months, whereas normally only about two months, in Aries. Right now, in this Last Quarter Moon configuration, Mars is also in a conjunction with Chiron, the Wounded Healer. This could be prompting us to look at our unresolved Mars issues, and as well our hidden wounds in other areas. This implies that what could arise is where we have unexpressed anger, or where we tend to be overly aggressive with our agendas. This could also be expressed in just the opposite, where we tend to collapse and fail to exert our will in the world. Ultimately this entire end of the year can represent a process of bringing in, for each one of us, a healthful Mars expression. This manifests in exploring how we can exert a personal will that is aligned with our higher truth and Essence, our holy volition, and by allowing our anger to spur us on into right action that aids in healing the difficult dynamics of our 21st century world. 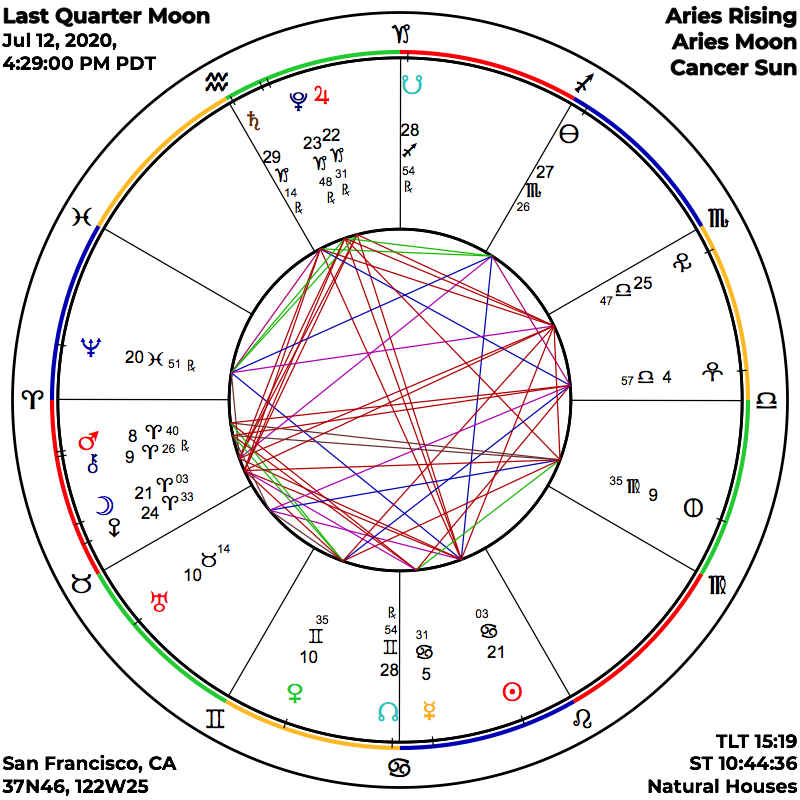