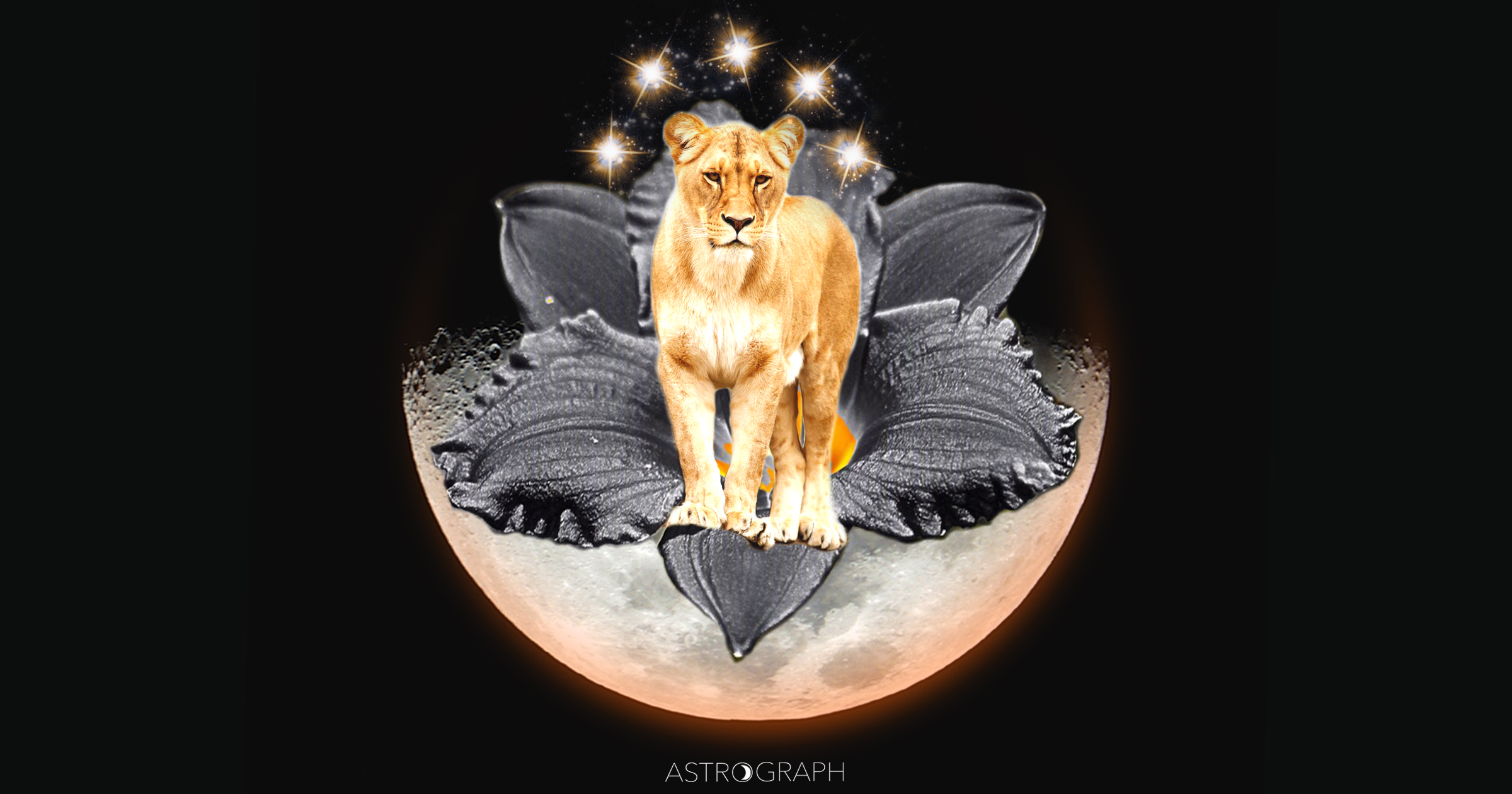 A First Quarter Moon of Staying the Course

Posted on May 11, 2019 in Configurations |
By Henry Seltzer for ASTROGRAPH Horoscopes

Saturday’s First Quarter Moon in Leo, taking place on the early to late evening of May 11th, depending on time zone, continues many of the themes of the recent New Moon, with Pluto, representing transformation and personal evolution through letting go, still quite prominent, and with Saturn remaining nearby, about 2 ½ degrees away, and closely parallel. These planets, in fact, have barely moved since the previous weekend when this current cycle kicked off – because so recently having stationed to retrograde motion in late April – and their being slow in the sky means more powerful. So the news here is that in the midst of massive structural metamorphosis on both a collective and an individual level, we are still engaged, still fundamentally optimistic in the face of trial, still trying to find our way through. The strong position of Pluto from the New Moon chart, in square with the new planet, Eris – greatly increasing his effects – is bolstered in this quarter Moon configuration by the Sun and Moon in trine and inconjunct with Pluto. Jupiter, too, remains in aspect, with a close grand trine in fire between Jupiter, Eris and the Moon in Leo. Meanwhile, Mercury, now in Taurus, disposes and aspects Mars in Gemini, which also sextiles and rules Venus in Aries, thus bringing the personal planets into this comic patterning in quite interesting ways. We are being asked to look to our relationships and also our own internal thought processes for clues to help us handle the changes that are coming down throughout this rather intense May cycle. You succeed when you can take everything that the Universe is handing you at this particular time as part of your evolutionary learning curve, a jumping-off point for further exploration of your own fated development. You are thereby becoming closer to the unique individual shining star that you were always meant to embody.

The personal planets in this First Quarter Moon combine the elements of Earth, Air, and Fire in a creative way, as indicated above, combining also with the Jupiter-Pluto- Eris alignment. As we navigate the perhaps quite difficult passages of this cycle, we look to the Earth element as the most potent. No matter how wild, or fearful, or free our flights of fancy, it all comes down to practicality, and to the brass tacks lessons of what we must yield to, ally ourselves with, and also what we must be willing to let go of, in order to come to our ultimate destiny. We win when rather than focusing on any downside we can keep our eye on the prize, thereby empowering ourselves. In this way we grow as humans and proceed with the discovery of our deepest values, the ones we must unconditionally adhere to, and act upon. We therefore begin to accomplish whatever it is that we find deep in our hearts; that which we cannot not do.

It is interesting also to note also the current prominence of the other two named “dwarf” planets in the Kuiper Belt. These are the ones that were so designated, along with Pluto and Eris, in the first decade of this 21st century, namely Haumea and Makemake, representing profound connection to Nature, and to earth issues. Venus, at 25 + degrees of Aries, stands in partile or same-sign opposition to Haumea in Libra, while Makemake, in Libra as well, lies partile opposite Chiron, the Wounded Healer, at 4 + degrees of Aries. One obvious evidence of these new archetypal presences is the acknowledgement now being paid on the collective level to issues of the global environment, such as climate change, exemplified as a prominent theme of the progressive voices suddenly showing up in American politics. On an individual level, there might be ways that you comprehend your own dependence on nature as a spiritual path. There is something about the ocean, the woods, and the mountains that brings us closer to Spirit, and this recognition may come to your aid in some fashion, during these challenging times. There is more to come, as we enter the massive societal transition that lies ahead over these next eighteen months.

The Sabian Symbols for this First Quarter Moon have, as usual, something to contribute. They are, for the Moon, in the 22nd degree of Leo: “A carrier pigeon,” which we might think of as a living, breathing, conveyer of an important message. So are we all. Marc Edmund Jones writes of, “the unlimited service of life at large, to the special requirements of an individual’s intelligence or understanding.” He goes on to state that we must be willing to learn from our experiences, referencing, “the extraordinary extent to which (we) may count on learning whatever (we) might need to know, whenever facing any unfamiliar or critical issue… the complete mastery of things through the normal processes of thought.” For the Moon, in the same degree of Leo, we find, “White dove over troubled waters,” which again really speaks to the situation in which we currently find ourselves. Jones mentions, “the clear direction or absolute orientation which comes to (wo)man from birth, as a consequence of his or her indwelling spirit… a skillful reconciliation of difficulties in the light of over-all potentials.” Indeed it is only when we turn to our native spiritual wisdom – which all of us hold inside – that we begin to see the point of the difficult changes that we are now going through. Suffering as we do here below, it is only justified when we can manage to learn from the experience. Taking a clue from prominent Jupiter, may we all find what we need in the unrelenting beneficence of the surrounding cosmos, the light within that, even when the sky seems darkest, nevertheless brightly shines! 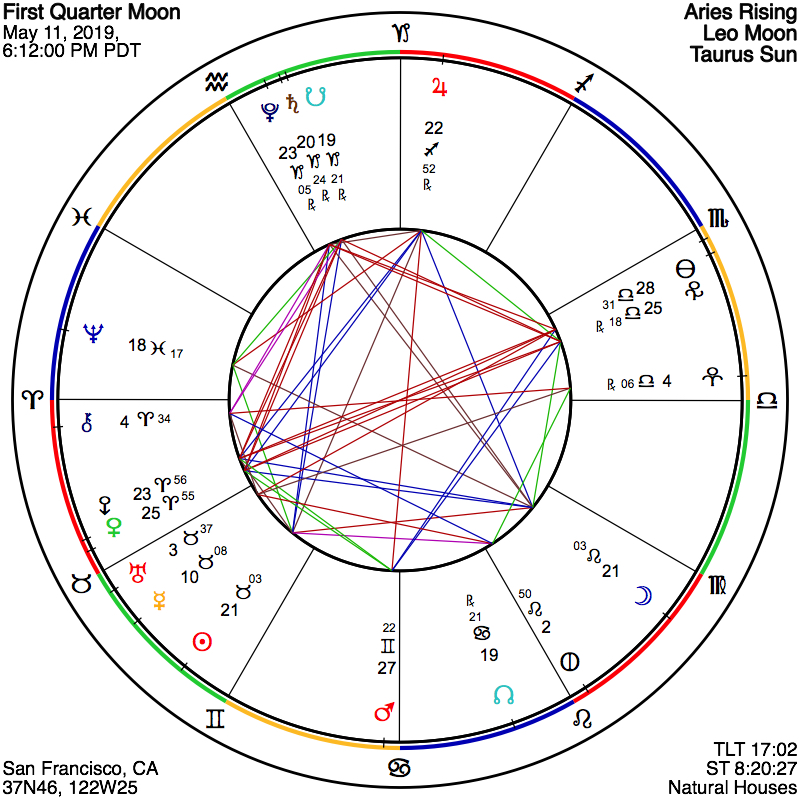