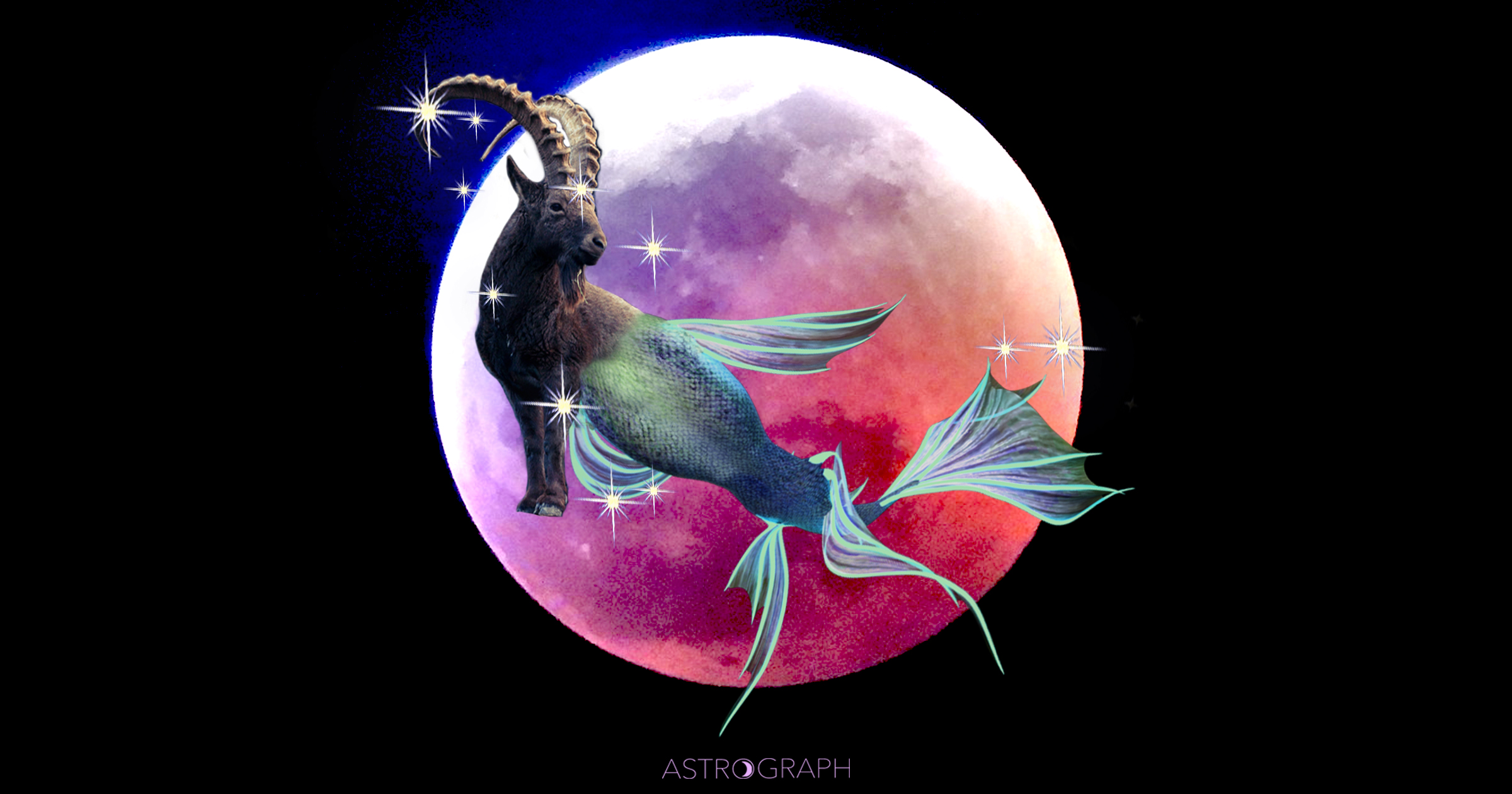 Posted on July 15, 2019 in Configurations |
By Henry Seltzer for ASTROGRAPH Horoscopes

Tuesday’s Lunar Eclipse, the follow-up to the Solar Eclipse and New Moon of Tuesday, July 2nd, takes place on Tuesday, July 16th at 2:38 PM on the West Coast, later in the afternoon and evening for points east, and represents a rather dramatic astrological event. In this Full Moon, the Moon is closely conjunct a powerfully configured Pluto, signifier of evolutionary transformation. Also Pluto is currently in close parallel to Saturn, making these two powerhouse planets together the compelling news story of the month, and giving us a preview of their rather dire exact conjunctions coming up in January and November of 2020. In one way of reading the combination of Saturn and Pluto, it is difficulty, austerity, and contraction, along with what astrologer Richard Tarnas calls “conservative empowerment.” We are seeing some of that now in the tenor of the times, and more importantly in our individual response to the nature of the societal metamorphosis that we find ourselves in. Remembering the time-worn phrase that difficulty builds character, and that “when the going gets tough, the tough get going,” we might connect the dots from the initiatory passage of these 21st century days to a necessary personal transformation that each of us faces as we attempt to discover how to survive the next few years. It is becoming more evident that climate change must inevitably play a huge role in how world conditions unfold over the next decade or two, and that there might well be austerity measures involved. The human species does seem to survive in spite of everything, but it may be in a greatly altered form, especially regarding the structure of the society that will arrive to carry us through the coming environmental catastrophe.

It is interesting to note that two other partile – or same-sign – oppositions, beside that of the Sun and Moon, are visible in this eclipse configuration, one being Venus opposite Saturn, both at the 16-degree mark of their respective signs of Cancer and Capricorn. This opposition is also closely aligned with the nodal axis at 17 Cancer-Capricorn, making it even more significant. With Venus opposite Saturn in the sky, we would say that one theme of this archetypal combination would be the limitation of relationship possibilities and their refinement. Another would be the idea of commitment. Yet others would be: relating to a guru or mentor, or an older person, learning from partners, and applying a practical test to one’s artistic endeavors, ensuring that a project is something that can actually be accomplished. Similarly, the relationship project of your life might run up against difficulties at this juncture; these are however the kind of difficulties that breed a better understanding of where you and your partner fit, where not so much, and how to improve the harmony between you by making necessary changes to take you through to the long haul.

In this Full Moon eclipse as well, it is quite interesting to note that two of the new Kuiper Belt planets that I have been researching are also showing up at the 24-degree mark of the other two cardinal signs of Aries and Libra, another partile opposition that makes a perfect partile grand cross with the eclipse Sun and Moon! Eris, representing a Feminine Warrior in support of soul intention, at 24 Aries, is one of the two, and Haumea, earth goddess energy in the form of the raw power of manifestation, at 24 Libra, is the other. This is quite significant, and involves standing up and articulating, plus acting on, whatever it is that you most deeply believe, at the deepest possible level, and combining these efforts with an understanding of and support for earth issues. I think of this dynamic opposition as representing far greater attention being paid to issues of climate change and species loss, including the acidification of the oceans and excess carbon dioxide in the atmosphere from the burning of fossil fuels. As much as we as a culture have an addiction to energy, and to oil and coal as suppliers of that energy, where that addiction has led to the poisoning of the atmosphere and resultant global warming, this needs to be somehow slowed down and replaced by sustainable sources. This is simple math, given the ongoing melting of the polar ice cap, plus the glaciers of Greenland and Antarctica, and the ensuing sea-level rise and extreme weather that will create crop losses and millions of environmental refugees. The consequences obviously get more dire, the more we delay action on this vital issue. I believe that these ideas and the calls for action will rise to a veritable crescendo over the remainder of this turning point year.

The Sabian Symbols for this Full Moon eclipse are also of interest. They are, for the Moon, in the 25th degree of Capricorn, “An oriental-rug dealer,” which Marc Edmund Jones relates to social necessities. He states, “eternal values are meaningless unless they are woven into the fabric of humanity’s familiar transactions.” For the Sun, in the same degree of Cancer, we find, “A dark shadow or mantle thrown suddenly over the right shoulder.” Jones in his write-up waxes eloquent about, “man’s obligation to the reality of which he is a part… self-expression here is a release of inner potentialities, and it becomes both an individual gratification and an expanding responsibility to all other individuals making up the social complex.” As we engage, both within and outside of ourselves, with the ever-growing societal transformation of these climactic last years of this decade, we are reminded that everything that we do serves ourselves and, as well, our fellow humans on the planet.

May we all shine on in carrying out this vital mission! 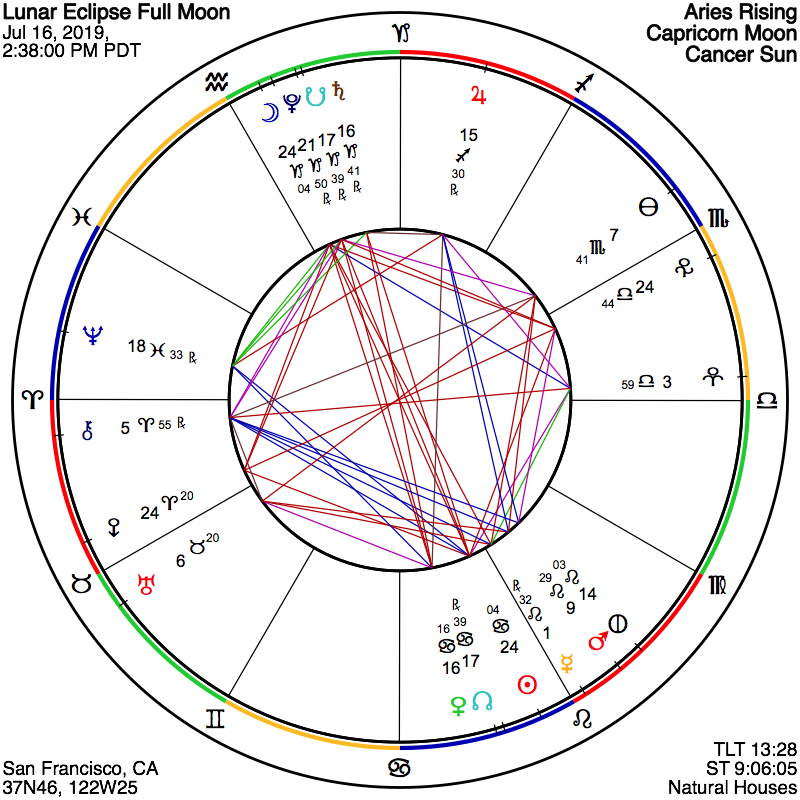