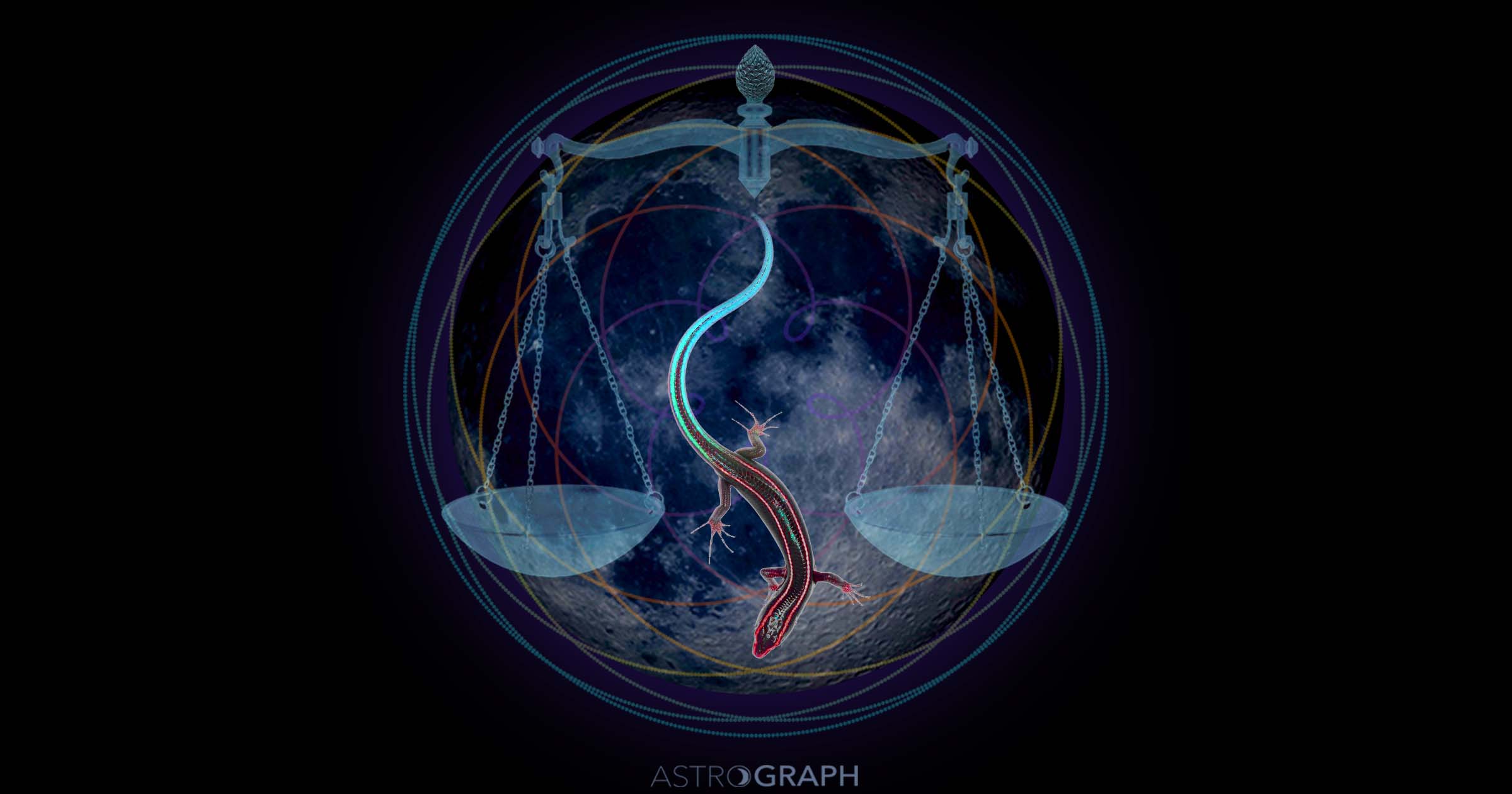 A Libra New Moon of Taking the Bull by the Horns

Posted on October 6, 2018 in Configurations |
By Henry Seltzer for ASTROGRAPH Horoscopes

Monday evening’s New Moon at the middle degree of Libra, taking place late on October 8th, is a study in paradox. Venus rules the Sun and Moon in Libra, and yet Venus is now moving backward, through the muddy waters of Scorpio, headed for her Heliacal Rise as the Morning Star in the final degrees of Libra on November 1st. We are, all of us, searching for the deeper motivation behind our relationship activities, and sexual misconduct is once more in the news. After November 1st a new synodic cycle of 584 days begins, in which Venus will have the characterization of a late Libra Venus, but first she has to get there. Then too, there is no letup on the recent emphasis of Pluto and also of Uranus in this latest in the series of rather intense lunations that have been coming down. Pluto, having only just recently stationed to direct motion, and therefore more powerful, is squared by the Sun and Moon in mid-Capricorn. Uranus, too, is emphasized, with Mercury being exactly contra-parallel, and opposed. Finally, both Neptune and the new planet, Eris, are also strongly present in this New Moon configuration. The Sun and Moon make an inconjunct aspect to Neptune, while the inconjunct from Jupiter to Eris is exact to the minute of a degree. And the message of prominent Eris, Feminine Warrior in support of soul intention, is that we dig deep within ourselves to discover our true values, and then articulate these in the strongest possible terms, fighting for them if need be.

With Pluto so very prominent in this New Moon configuration, and with Uranus prominent also, one thing is clear, that the transformational beat that we have been seeing all summer goes on. It is no exaggeration to state that the results of the historic Senate vote this weekend confirming Justice Kavanaugh to the Supreme Court will change this country in many ways, both foreseen and unforeseen, so that in future years we will be able to look back on this time and see the swing in the tenor of the highest court in the land, and as well the enormous shift in public opinion that will have resulted. In short, this will encourage both sides of the divisive stalemate that has plagued this confirmation vote. More importantly, in our individual lives, we will see how the events of this past summer have been, and continue to be, climactic in helping to enable the shift that we ourselves have desired to make in our own lives. It is time to pick up the task that lies before us, at both personal and societal levels, and forge ahead with needed transformation, refusing to be swayed by any opinion other than our own from making the changes that we know in our hearts that we need to make.

With numinous and otherworldly Neptune highlighted both last cycle and in this one, there is also a degree of confusion that will remain in the air for at least the remainder of the month as to what can be seen as the absolute truth of any matter. In personal terms, this is where it gets tricky; go from your highest ideals, yes, always, and yet also somehow attempt to discern what your bottom-line principles in fact really are. It is also important to note that there is a spiritual dimension to all our dealings now that we will want to pay attention to. Chiron, the Wounded Healer, having only just now dipped back into Pisces, and being closely aspected by Mercury in this New Moon, speaks to the painful nature of the feelings that we may have, personally, as we transform. This is over what has been gained, and what lost. On the national scene as well there have been many painful realization on both sides of the political isle. The vote to confirm Justice Kavanaugh conformed, with two exceptions, to strict party lines, so that the gulf between the opinions of different groups of people, and different political parties, remains as much of a chasm as ever. And this reflects the continuing aspect between progressive Uranus and conservative Saturn, which although now fading still remains close in the timing of this New Moon, at little more than two degrees.

Uranus has been a close companion to Eris since the crazy summer of 2016 when the progressive rhetoric of Bernie Sanders electrified the Democrats and the maverick candidacy of Donald Trump prevailed over the also-ran Republican entries. This winter, as Uranus leaves Taurus in retrograde motion and re-enters Aries, that conjunction gains momentum once again, lasting through to 2020 within its orb of influence as a “World Transit,” in the terminology of astrologer Richard Tarnas. With Eris also prominent in this coming New Moon, it is not surprising that both political parties are amped up to stand tall for their intended outcome and for their own version of the truth. A good example of this from is former Senator Barbara Boxer, herself blessed with strong Eris, who stated in an interview last week (while encouraging her Republican colleagues to break ranks) that when she voted against the Iraq war in 2003 it was highly unpopular with her constituency. That vote would be far more understandable to them today. She said last week that at that time it was a vote of conscience, and that you sometimes just have to take an unpopular position, because “there is such a thing as right and wrong.”

The Sabian Symbol for this New Moon might also prove enlightening. It is, for the Sun and Moon at the 15-plus degree mark of Libra, “A boat landing washed away.” In his exegesis of this symbol, seminal 20th century astrologer Marc Edmund Jones states that it represents more of a beginning than an ending; that the boat landing was necessary and will need to be replaced. He remarks, “Here is not so much a thwarting of human effort as a stimulation to new accomplishment, and a freedom from whatever has exceeded its usefulness. Implicit is a challenge to pure individuality; a joy in bringing every self-competence to the recurrent emergencies of life.” Indeed we must all recognize, as really we do in every moment, that it is high time to be up and doing, to embrace what sometimes appears to be the nearly monumental task that lies before us, whether societal or personal, and to keep on plugging away. This is so that we might ultimately achieve what we most sincerely know in our hearts to be right. 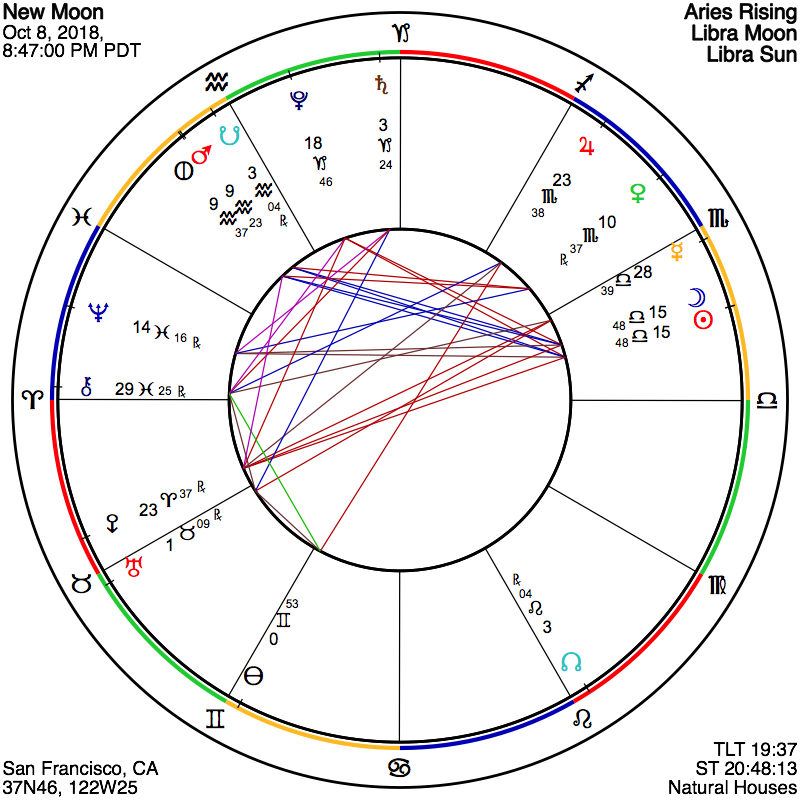