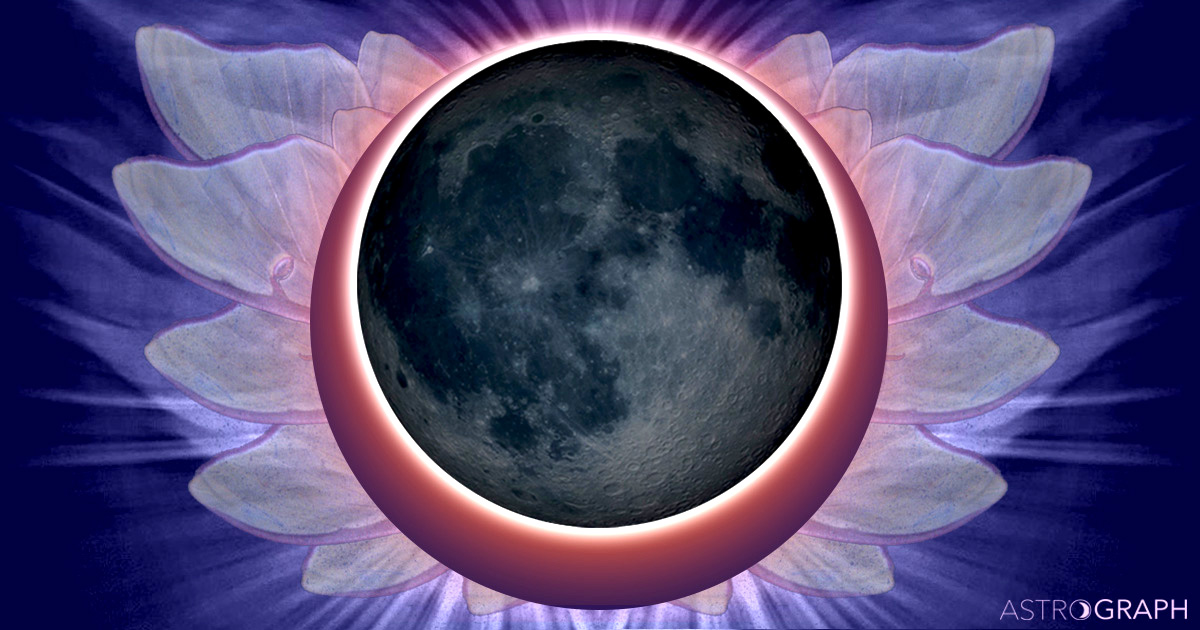 The Solar Eclipse and Cancer New Moon: Harmony Through Conflict

Posted on July 11, 2018 in Configurations |
By Henry Seltzer for ASTROGRAPH Horoscopes

Wednesday evening’s Cancer New Moon and Solar Eclipse, taking place on July 12th, has been much discussed recently by astrologers, because it represents a huge watershed in human affairs, symbolizing major effects on both collective and individual levels. For starters, the eclipse point lies in partile opposition to Pluto, and thus signifies that this continues to be a darkly transformational time. This applies for potentially the next six months, on to the ending of the year, because eclipses are known have this kind of long-term action. The extremely close configuration with Pluto now is of extraordinary importance, as can be seen as well by the extremity of the chaos and dire confusion in the current zeitgeist. Each one of us, it could be said, are required to rise up in response, for whatever stand we feel we need to take, as representing our most deeply felt values and concerns. We find ourselves in the maelstrom of massive change both within and outside of ourselves. That this corresponds to the symbolism of the Fourth Ray of esoteric astrology, Harmony through Conflict, may not be of much consolation, although it does seem to be the way that evolution happens here on planet Earth, at least in the age that we are currently living through.

Additionally to Pluto, the other outer planets are also highlighted in the potent juncture occasioned by this intense eclipse configuration. There is a tight grand trine in earth signs between Uranus, Saturn, and Venus that is active now, and the eclipse degree itself figures in another grand trine in Water, between Sun/Moon, Neptune in Pisces, and a stationing Jupiter, beginning in mid-Scorpio his forward motion once again. Other aspect patterns feature Chiron, the Wounded Healer, and newly discovered Eris, Feminine Warrior energy in support of profound soul intention. The Sun/Moon opposition to Pluto makes a T-square to Eris, located at 24 plus degrees of Aries, while Chiron squares Saturn, and closely aspects Mercury, Venus, and Uranus. One way to look at this latter planetary patterning speaks to the painful situations created by the misuse of authority, as we have seen in recent weeks with the cruel Trump-administration policy against asylum-seeking and other immigrants at the US border of separating children from their parents, some of toddler age. This practice, intended as a deterrent to immigration, has now ended, but yet remains lodged in the nation’s conscience, especially since the means of re-connecting families in the majority of these cases by relevant government agencies remains out of reach.

With numinous Neptune configured with Jupiter, along with these dire circumstances there is also a note of optimism expressed in this eclipse configuration, as well as a degree of Neptunian confusion regarding the various conundrums that Americans, along with the rest of the world, are currently experiencing, and how to regard them. As populations flee impossible conditions in their home countries, is it the worldwide problem of rampant immigration that is the real issue, requiring draconian measures to handle it, or are there humanitarian solutions that can be found? And which side of the increasing divide between right wing and left wing extremism does each of us find ourselves to be on? One hardly knows how to answer. The polarization that has crippled progress in many democracies – including our own, here in the U.S. – is reflected in the Saturn-Uranus trine that also involves Venus, ruler of diplomatically inclined Libra, and harbinger of peace. We can only hope for some kind of constructive resolution to begin to emerge.

The Sabian Symbol for this New Moon eclipse is also of interest. It is, for the 21st degree of Cancer, “A prima donna, singing.” While in present-day terms this might remind us of the US president telling tales, the symbolic resonance speaks to the question of ego versus art. When we do what we do with a higher purpose in mind, we may be able to transcend petty drives for recognition and status. Marc Edmund Jones, himself possessed of a powerful Eris placement, refers to “the inevitable culmination for individual opportunity, an enduring contribution of skill and talent to whatever may entertain the soul’s recurrent and constant discovery of itself.” Indeed, we must, in the face of possible despair, attempt in spite of everything to triumph in terms of what we each can alone contribute, our own stand for what matters most, for ourselves and for the future of our society. 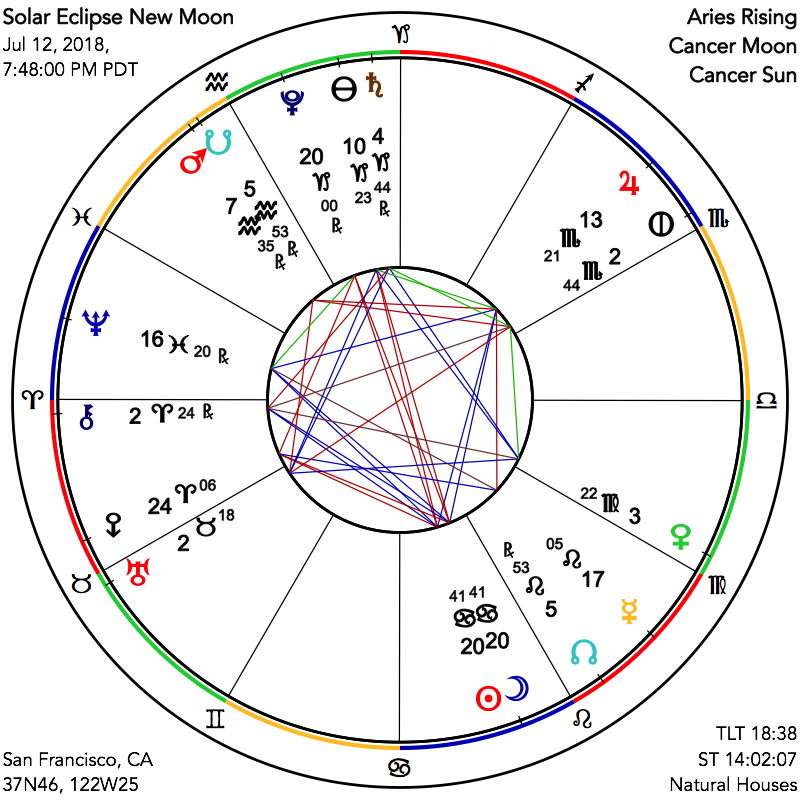