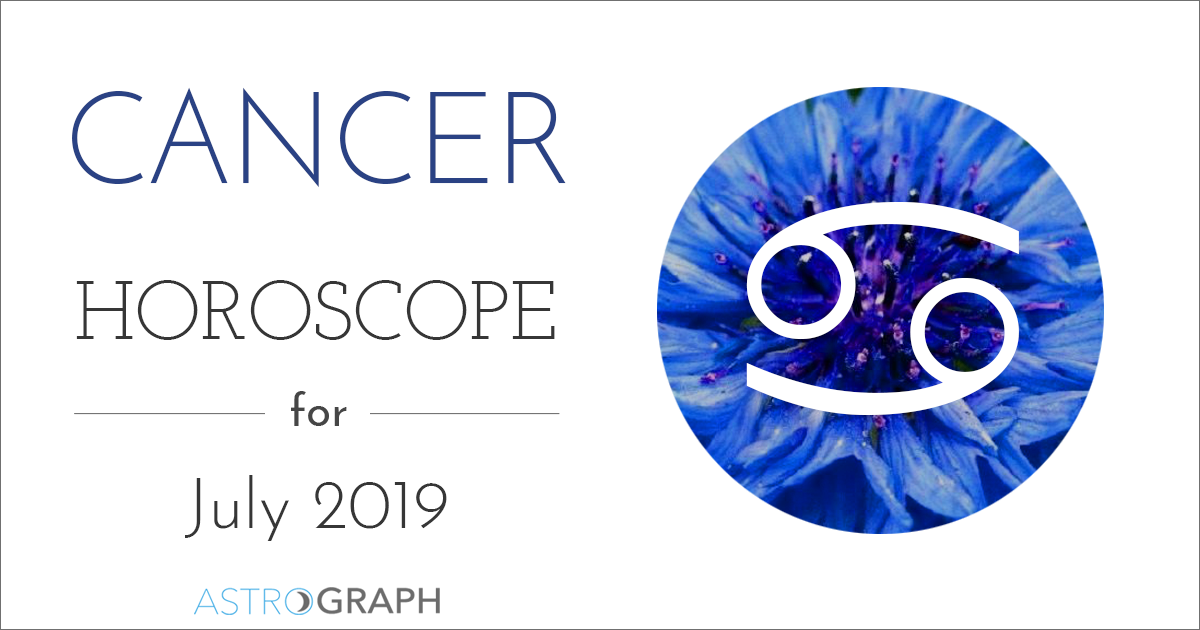 Posted on June 30, 2019 in Cancer |
By Henry Seltzer and Adam Elenbaas for ASTROGRAPH Horoscopes

This is another action-packed month for you, Cancer, kicked off by a Solar Eclipse New Moon in your sign taking place on July 2nd. Knowing who you really are, warts and all, becomes of fundamental importance. Themes of art, aesthetics, and relationship are fully up for you for the entire month, especially at the moment of the lovely Venus crossing into your sign on the 3rd. In the early going also, you might find a certain degree of career angst. You are questioning all aspects of what you do out in the public sphere, and this includes checking in on inner wounding that may be holding you back. These dark places within you, the residue of early childhood trauma, will continue to plague you until you can acknowledge them and reach down a comforting hand from your mature identity. At the Full Moon eclipse of July 16th, you will find relationship transformation, as well as a sense of mission in pursuing this idea as your newest art form.

The month starts astrologically with a super-charged Solar Eclipse in your home sign of Cancer on July 2nd, initiating a moment of profound rebirth. New Moons happen each year in your home sign during Cancer season, but solar eclipses in your home sign only occur once every nine years or so, and only once every eighteen years or so with the North Node of the Moon. Generally speaking, an eclipse in your home sign indicates a very powerful turning point in your life, if not a new beginning or birth. However, with the North Node of the Moon also involved, we can add in the Jupiterian theme of growth, abundance, success, and the future, all of which the North Node was traditionally associated with. So, this is a big moment for Cancerians. However, remember that the seeds planted by an eclipse often take a while to bear fruit. You can expect to see a dramatic change, if it’s not already happening, within the next six months.

Between July 7th and 9th, Mercury in Leo will conjoin with Mars and then turn retrograde in your second house of finances and resources. This may bring with it some unexpected financial changes or expenses, or it may signal the need to update your technology, or it might even bring with it a change of business or financial strategy. It is also possible that a deal or negotiation proves a little challenging during this time. Be careful of domineering or bullying tactics in your relationships. The mind/body connection can be especially potent, and more easily agitated, when Mercury and Mars get together. So be sure to slow down, take your time, and move mindfully through any big decisions you have to make right now.

Between July 9th and the 16th, the Sun in Cancer in your first house will work its way through oppositions to Saturn and Pluto in Capricorn in your seventh house of relationships and marriage, and then on July 16th, a Lunar Eclipse will fall in Capricorn, in close proximity to Pluto, all of which points to a major period of growth, healing, and transformation in your relationships. Remember that lunar eclipses are huge for you because it means that your ruling planet, the Moon, is being eclipsed. Typically, this implies endings or important culminations or resolutions. You may therefore be at the threshold of a major personal change, and yet while this is happening fate may be forcing you to relinquish someone or something else. The only way out is through, resting on the knowledge that with every death or ending there is always a new chapter ahead.


Between July 16th and the 21st, Venus in Cancer will get in on the action and will also make oppositions to Saturn and Pluto in Capricorn in your seventh house of relationships. The Lunar Eclipse itself features Venus, the planet of relationship, in partile or same-sign opposition to Saturn, thus characterizing this lunation as one that honors and brings commitment to aesthetics and relationship. You might also experience limitations to your approach in these areas, as well as deep transformation, which it will be necessary to work through.

The good news for this transit is that prominent Venus in your sign should bring with her a soothing, fortunate, and harmonious energy. The potential for healing and compromise is here right now, but it will require you to be emotionally stable, to set good boundAries, and to nurture the best in yourself and in your relationships. This transit may also signify a major turning point in a friendship or relationship, sometimes painful but necessary, or it may indicate the natural deepening of bonds and commitments over time.

Finally, on July 31st, the New Moon in Leo lands in your second house of finances and resources, making a square to Uranus in Taurus in your eleventh house of friends and allies, indicating that the energy coming out of this eclipse season will be immediately activating a period of innovation and change in relation to finances and friendships, groups and collaborative efforts. Given the focus of Mercury Retrograde in your financial house earlier in the month, it’s also likely that you are ready to try a new approach to money and business. The Venus/Uranus square may also point to the need for greater freedom or experimentation in your social connections or romantic life. Enjoy it!