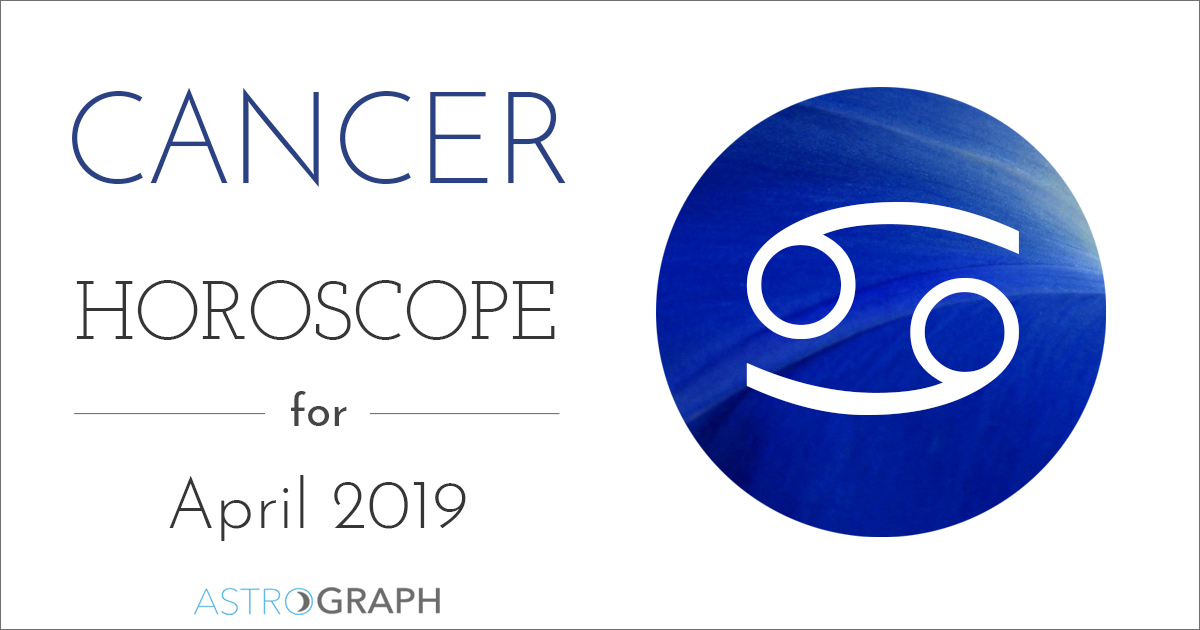 Posted on March 30, 2019 in Cancer |
By Henry Seltzer and Adam Elenbaas for ASTROGRAPH Horoscopes

This is another amazing month of realizations and depth work, Cancer, a fitting follow up to the previous one’s intensity. You have a strong focus on profession and career, although, you may find, in a new way that takes into account the largely uncharted territory of your own unconscious impulses and desires. The retrograde of Mercury that dominated last month’s astrological currents is still winding down as April begins. The first few days, especially, leading up to the New Moon of April 5th, are not a time to push the river at all, but rather to watch and wait, allowing your perceptions to flow. The subject matter of inner wounding could come up, the residue of early childhood trauma that has remained walled away for many years, perhaps, so that now is your chance. All problems contain within them the germ of their solution, and your intellectual and emotional resources combined are well-poised, as the month continues to unfold, to advance your ultimate cause of integration and wholeness.

April’s major events revolve around a series of planetary transits moving through conjunctions to Neptune in Pisces in your ninth house of the higher mind while also making squares to Jupiter in Sagittarius in your sixth house of work, sickness, and service. The action begins with a conjunction from Mercury in Pisces to Neptune on April 2nd, and then continues as Mercury moves into a square with Jupiter in Sagittarius by April 12th. Similarly, Venus in Pisces will conjoin Neptune on April 10th and then square Jupiter in Sagittarius by April 15th. This entire sequence point to a sea-change in relation to higher beliefs or learning, with an emphasis on the shifting of your ideals or intentions in life that are coming to you right now through setbacks, personal challenges, hard work, or even sickness. The good news is that there is a very real ability to gain insight into what really matters and to work toward creating much needed changes for the sake of improved health and happiness in the long run.

On April 5th, the New Moon will fall in Aries in your tenth house of career and action, and then the Sun will perfect squares to Saturn and Pluto in Capricorn in the house of relationships between April 10th and 13th. This sequence of transits also points to the need or desire to start something new in the workplace, or to take strong actions based on a series of transformative experiences you are having in your relationships right now. It’s important that you be clear about your intentions, as well as your principles, but don’t forget the need to find a peaceful resolution.

The Full Moon in Libra on April 19th will highlight the importance of compromise from within your fourth house of home and family later this month, as it also squares Saturn and Pluto in your seventh house and brings counterbalancing themes of fairness, beauty, and harmony into the domestic sphere of life, as well as within your relationships.

Between April 19th and the 23rd, also, both Mercury and Venus conjoin Chiron the Wounded Healer in your tenth house of work. The importance of healing communication in your relationships, publicly, or in the workplace will become more obvious.

During the same period, on April 20th, it’s interesting to note that the Sun will enter Taurus and there conjoin Uranus until the 23rd from within your eleventh house of friends and benefactors, perhaps suggesting a sudden or unexpected shakeup or liberating moment among colleagues or within groups you belong to.

Finally, between April 25th and 27th, Mars in Gemini from your 12th house of dissolution and self-undoing will make a square to Neptune in your ninth house of the higher mind, bringing with it some potentially self-destructive mental and emotional energy with it. Be careful not to become a martyr for someone else’s cause during this period, but don’t be surprised if you are also feeling the urge to challenge authority or walk off the beaten path for a little while, either.