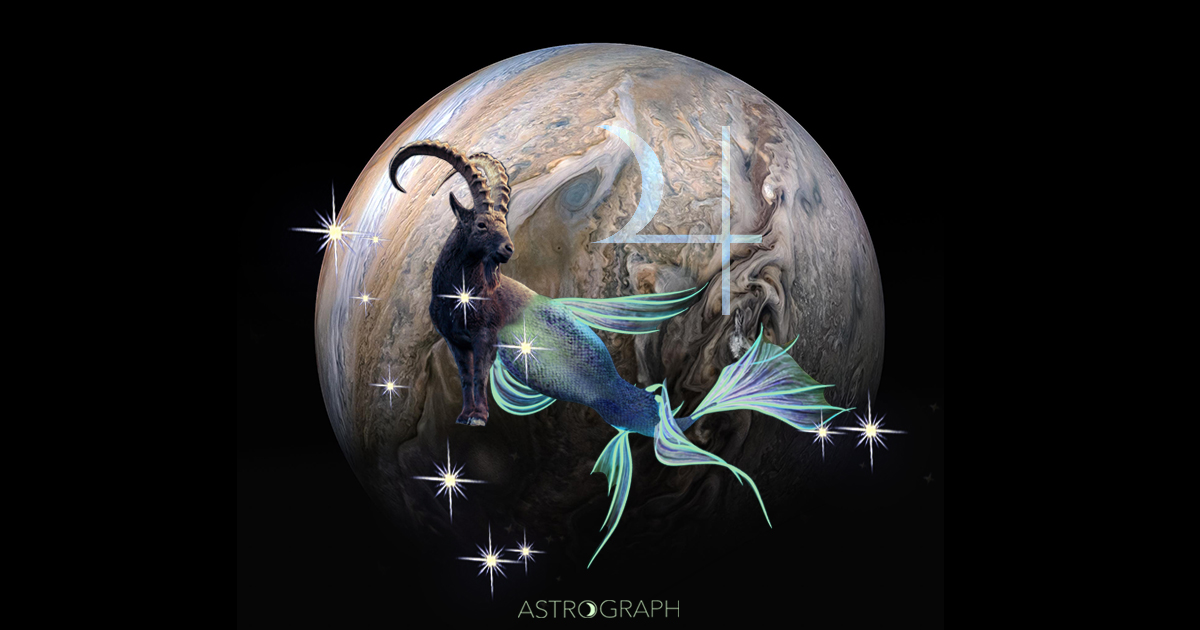 Jupiter into Capricorn, a 2020 Preview

Posted on December 5, 2019 in Announcements |
By Henry Seltzer for ASTROGRAPH Horoscopes

This December is notable astrologically for several things, although perhaps most importantly for the yearly transition of Jupiter into his next sign, in this case, Capricorn. This is a transition that took place earlier this week, on Monday, December 2nd. This planetary ingress is also quite significant because Jupiter is making his move from Sagittarius, which he rules, to Capricorn, ruled by the dour old man archetype and Jupiter's alter ego, Saturn. Jupiter in Capricorn is therefore likely to be an entirely different Jupiterian energy than what we have had during all the previous months of 2019. Together, these two planets are called the “social” planets, having more to do with collective concerns than with our individual identities. In symbolic resonance, the prevailing zeitgeist of December is likely to become decidedly more pessimistic. There is also a certain spiritual joy in having Jupiter there, offsetting Saturn. With Eris square Pluto at this moment as well, we will all have to step up to a warrior stance, being – to the full extent of our abilities – the best version of ourselves that we can be, adhering to our bottom-line values. The Sabian Symbol for the first degree of Capricorn bears this out, being “A Native American Chief demands recognition.” Only what comes to us straight from Natural Law and inner guidance will serve our purpose now.

As Jupiter penetrates deeper into Capricorn over the succeeding twelve months of 2020, he also makes an important interaction with Saturn and Pluto, currently approaching their January conjunction. This occurs from January 12th to the 16th, and that is likely to be a somewhat difficult time for the United States, and indeed, the world. In our individual lives as well, we will be faced with an increased sense of the far-reaching changes that we are all going through, contributing to, and also affected by, the massive structural metamorphosis of the society. This accentuates at a further point next year, namely mid to late November, when Jupiter reaches the same degree as Pluto, with Saturn nearby. This storied triple conjunction of the social planets, plus Pluto, along with a partile square to Pluto from Eris that remains active at that timing, indicates a great deal of ferment in the collective, following, rather than preceding, the U.S. elections of November. This indicates to some astrologers, including myself, that President Trump will lose the election but refuse to step down, creating further constitutional crisis here, and consternation in Europe and the rest of the world.

Jupiter and Saturn are also famously conjoined every 20 years, heralding societal shifts, and this too is coming up in 2020. Recent conjunctions have occurred near the beginning of even decades: 1921, 1940, 1961, 1980, and 2000, with the next one scheduled to occur on December 21st of 2020. Jupiter now entering Saturn’s own sign of Capricorn, where Saturn also now resides, is thus a harbinger of this important conjunction coming up by the end of next year. The December 21st perfected conjunction of Jupiter and Saturn takes place at the 0 degree mark of Aquarius, an Air sign, occurring in Air for the first time in many decades, and will continue in Air for the next approximately two hundred years. This is with one exception in late 1980, when it occurred in Libra. The shift of the Great Conjunction (of Jupiter and Saturn) to the Air element is another indication of major societal changes coming down upon us, and to some astrologers signals the 2,000 year shifting of the Astrological Age. This next decade may indeed represent the “dawning of the Age of Aquarius,” with its emphasis changing from life after death to this life, from abstract “pie in the sky” to a more interconnected and fully realized humanism.

The aspects that Jupiter makes as he transitions into Capricorn are also significant, since there is a close square that forms all this week to Chiron, the Wounded Healer. On a societal level this represents the angst and future shock implicit in the climate change debate, with the science becoming ever more clear regarding the necessity to curtail fossil fuel emissions, while that industry and its political supporters remain in denial. The effects will also be felt in each individual life, bringing inner wounding closer to the surface of our awareness. This not all bad; the consciousness of deep-seated complexes within us represents a vital first step for being able to move beyond that crippling residue of early childhood trauma.

Finally, Jupiter is closely trine Uranus in Taurus during the first half of December, which emphasizes once again the wild and unexpected energy of this trickster archetype, in absolute contrast to the stable earth energy of Taurus and Capricorn. In many ways, therefore, this December month represents a preview of the crises that we will face as a society, and individually, as we cross into the next decade of the 2020s. We can prepare by looking inside ourselves for what sincerely moves us, representing our deepest values, and by continuing to articulate these to the absolute exclusion of any potential influence from a severely damaged and increasingly inauthentic social matrix.