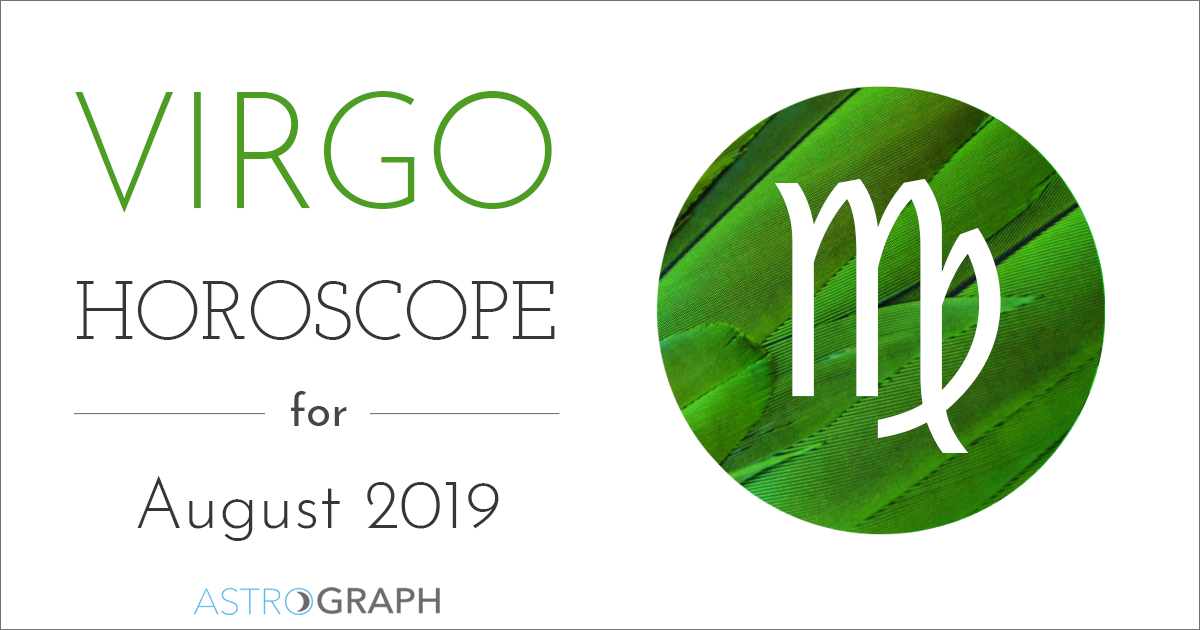 Posted on July 31, 2019 in Virgo |
By Henry Seltzer Adam Elenbaas for ASTROGRAPH Horoscopes

This is another quite interesting month for you, Virgo, with an emphasis on the contrast between inner and outer modalities. You have in recent weeks been engaged in a distinctly interior experience that continues into the first several weeks of August. Your dreams, and also your intuitive sense of yourself, are powerful sources of information for you now. One important juncture is represented by the Aquarius Full Moon on the 15th, which brings along with it a sense of mission, and of your ongoing personal evolution. Your inner orientation changes after the 21st, when Venus, followed by the Sun, enters your sign, joining Mars. This potent combination of planetary energies speaks more of enhanced face-to-face connection with others than of the rather intense interior experience of those first three weeks. You might say that the final ten days of August are a time of summary of lessons learned, a consolidation of your preceding preparation that allows you to face the world with new eyes.

The month begins just after a New Moon in Leo falls in your twelfth house of self-undoing and dissolution, also unconscious process and inner work. This is while the Sun, Moon, and Venus in Leo in your twelfth house is making a square to Uranus in your ninth house of the higher mind. In the lunation cycle ahead, you will thus be looking very deeply at your own inner shadows, especially in relation to love, romance, marriage, friendships, and even your own sexuality. The desire to break free or to rebel from restrictive people or environments is strong right now, but you should also be careful that you aren’t self-sabotaging or trying to escape just because you don’t like the feeling of being pent up.

Late on July 31st, also, or early Thursday, August 1st, Mercury will also turn direct in your eleventh house of friends and groups, perhaps suggesting that a period of emotional or personal regression within your social life over the past few weeks is turning around. This transit may also indicate that you are finding new allies or starting to recover after a time of professional or social loss or setbacks.

Between August 5th and the 8th, the Sun and Venus in Leo in your twelfth house of self-undoing and dissolution will make trines to Jupiter in Sagittarius in your fourth house of home and family. This sequence points to the need for deeper honesty, healing, and redemption relative to your home and family life. At the same time, the tendency to overdo things, to feel sorry for yourself, or to get stuck in stories about the past. The best thing you can do for yourself, and for your family, is to move forward and find the inner confidence and courage to be the highest version of yourself that you can be, regardless of whether or not you receive any kind of accolades or recognition as a result.

On August 11th, Mercury then enters Leo and moves into your twelfth house, just as Jupiter turns direct in Sagittarius in your fourth house of home and family, and just as Uranus turns retrograde in Taurus in your ninth house of the higher mind. There is a change of heart and a change of mind happening for you right now, with deep ties to your family, and to the need for a base of positivity and support in your life. On the other hand, you may be facing the temptation to cut ties and run, to start over, or to strike out in defiance and abandon a higher set of principles or responsibilities in favor of self-indulgence. It’s a precarious moment, so be sure that you are taking enough time to really think before you make any big decisions.

On August 15th, the Full Moon will land in Aquarius in your sixth house of sickness, work, and service, while Mercury in your twelfth house of self-undoing and dissolution squares Uranus in your ninth house of the higher mind. Sometimes, it’s easy to fall into extremes, and right now the extremes you are likely to take up involve either the temptation to exhaust yourself while trying to adhere to a higher set of rules or expectations that are unrealistic or even damaging to your mental, emotional, or physical health, or the temptation might be to fall into a pattern of self-sabotage or escapism. Be careful that you do not let your ego talk you into being either a great victim or a great hero, and instead try to focus on the choices that you’ve made that have led you into the current situation you’ve found yourself in. If you have reflected honestly and humbly, you will know exactly what to do.

On August 18th, Mars will then enter your home sign of Virgo, emphasizing the need to exert yourself physically, or to assert yourself mentally and verbally in the weeks ahead. Be careful of overdoing your enthusiasm and running over those that you are in connection with.

Then, between August 23rd and 25th, Venus and Mars will conjoin in Virgo in your first house. Your ruling planet, Mercury, will enter Virgo on August 29th, and then the New Moon will fall in Virgo on August 30th. This entire sequence places a strong emphasis on your health and body in the weeks to come. Because there is also a loose T-square forming between Jupiter and Neptune in Sagittarius and Pisces in your fourth house of home and family and your seventh house of relationships, it’s likely that you are on the brink of a time of personal, physical, and spiritual renewal. The shift ahead will likely involve a time of deep spiritual and philosophical reflection within your relationships as well as a time of growth both personally and at home or within your family.