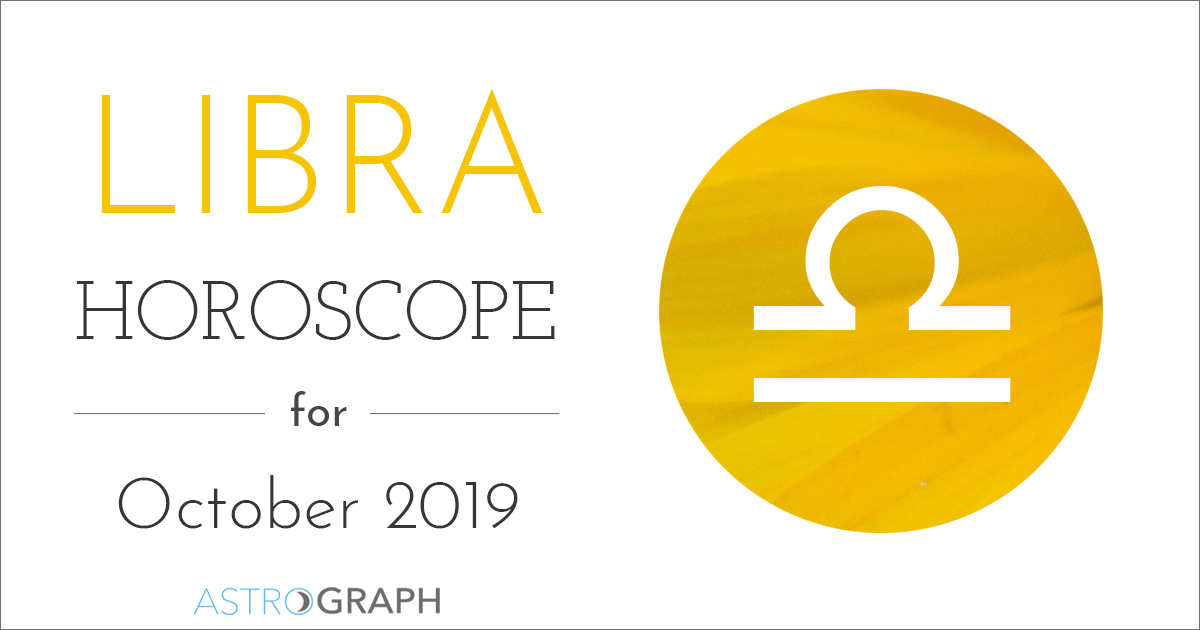 Posted on September 30, 2019 in Libra |
By Henry Seltzer and Adam Elenbaas for ASTROGRAPH Horoscopes

Opportunity comes knocking this month, Libra, as you discover new facets of home and family life that present transformational challenges in circumstances and attitude. This is also a time of deep intuition, and of quirky and unexpected adventures in intimacy with others and within yourself. You are essentially starting over on issues of identity and self-concept that have been brewing behind the scenes. You are in a fortunate position with regard to self-development, especially when you can stay fully open to possibility. As you seek a new synthesis, the mid-month Aries Full Moon is powerful for you, and is a time of coming to a better understanding of the mysterious Other. You are also dealing with ancient issues of early childhood wounding, and attempting to integrate the heady wine of new experience into old bottles, allowing alien perspectives to enliven core issues from the past. You win when you are able to articulate and incorporate into your ongoing process the deepest values that are most sincerely your own.

The month begins just after a New Moon (from September 28th), in your first house and in your home sign of Libra. With a series of squares set to take place between planets in Libra and planets in Capricorn in your fourth house of home and family, the theme of the month is personal growth and transformation in relation to home, family, and/or property. The heat gets turned up immediately around these themes as Mars enters Libra on October 3rd and is then amplified by the Sun’s square to Saturn on October 7th, and then the Sun’s square to Pluto on October 13th. For most of the month, you will be waking up to a new identity, a new sense of purpose, or perhaps even a new health regimen as you are dealing with issues stemming from within your home and family, or in relation to your sense of foundation and security in the world. This is deep and powerful work, which will likely peak right around the time of the Full Moon on October 13th, just as the Sun and Moon square Pluto and just as the Full Moon in Aries also lights up your seventh house of relationships and marriage.

There is also a major theme that stems from the highlighted presence of Uranus in Taurus, in your eighth house, powerfully aspected by the Sun and Moon in the recent New Moon, and therefore a strong factor throughout the month. The eighth house represents intimacy, death, debts, and other people’s resources. As the month gets underway, a highly significant series of transits makes this factor even more prominent, namely the repeated oppositions from planets in the sign of Scorpio to Uranus in Taurus. The first takes place on October 5th to the 7th, when Mercury in Scorpio opposes Uranus. Then, from October 11th to the 13th, Venus in Scorpio will oppose Uranus also. With each of these transits, you will experience a series of disruptions, revolutions, and liberating or individuating events in your life, which are also likely to include dynamic changes related to money, finances, and relationships, especially with regard to shared resources.

On October 13th, the Full Moon in Aries will fall in your seventh house of relationships, while Mars, ruler of that house, is residing in your home sign of Libra. The Sun and Moon will also precisely square Pluto in your fourth house of home, family, and your psychological roots. The presence of Pluto there, indicating deep-seated transformation of your core personality, and around issues of familial connection, has been an important factor all this year and will continue well into next. Conflicts may erupt around this time, or you may find that you are being called on to act as the mediator or diplomat for other’s struggles. Whatever the case might be, watch out for passive aggression and try to be as straight forward as you can. You are strong enough to be kind and kind enough to be strong.

Finally, on October 27th, the New Moon in Scorpio, in partile or same-degree opposition to Uranus in Taurus, in your eighth house, will land in your second house of money and resources, planting the seed of the next lunar cycle, lasting through to the last week of November, which will be focused on a series of revolutionary changes and also the prospect of instability, related to income and expenditures, possessions, resources, and the karmic entanglements you have with others.