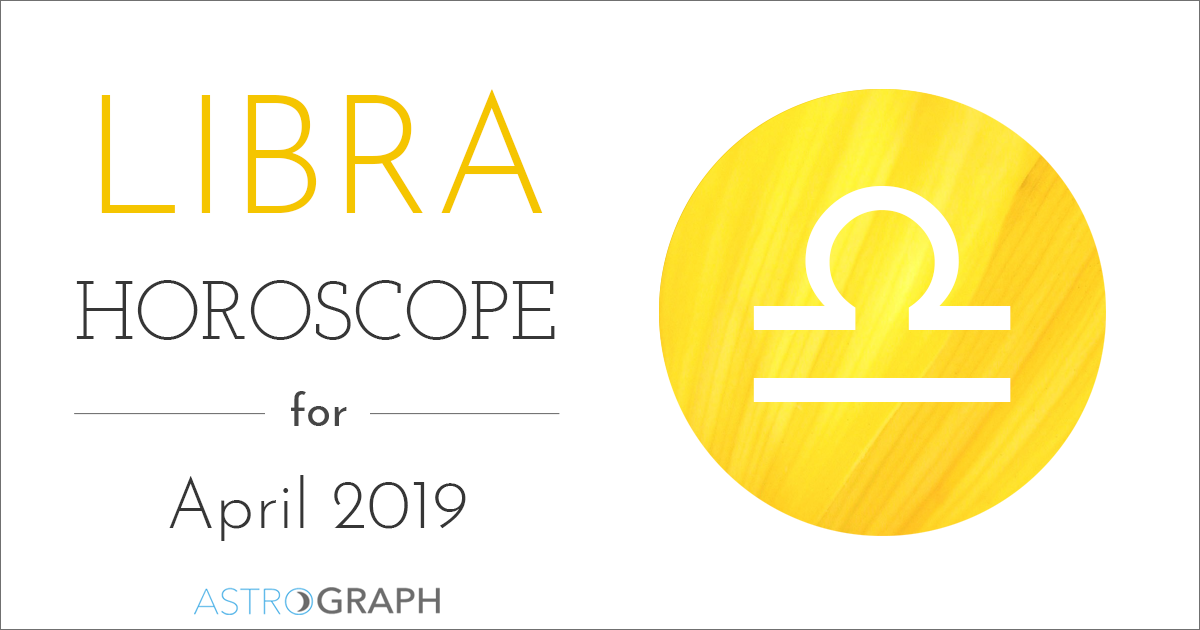 Posted on March 30, 2019 in Libra |
By Henry Seltzer and Adam Elenbaas for ASTROGRAPH Horoscopes

This is a month of personal evolution and the consciousness of change, Libra, following up on the intensity of a pivotal early year. The dynamic Aries New Moon of April 5th falls in your opposite sign, and your focus is on relationship with significant others, or potential partners, although your own inner world is the true target of all your striving. As has been the case for many weeks now, you are transforming at the core, and as this process is reaches for a peak, there are likely to be reflections in your family dynamics, either current from your family of origin, as well as an increasing sense of understanding concerning who you truly are. Partners can help with that. Your deeper values, now coming to the surface of your awareness, and calling out for you to act upon them for constructive results in social settings, need all the shoring up that you can get from trusted allies; as this powerful month continues to unwind, that support is available.

April brings a New Moon cycle that will activate both your seventh and first houses very strongly, starting with the New Moon in Aries falling in your seventh house of relationships on April 5th. Just after this, the Sun will make a series of squares to Saturn and Pluto in Capricorn in your fourth house of home, family, and foundations between April 10th and April 13th. All of which points to a time of initiation, confrontation, and illumination in your relationships, along with an examination of your roots and family, or a process of transforming your foundations from the inside out. These transits may also invite you to explore conflicting beliefs or needs in relationships, or they may lead to the creation of a new material or intellectual foundation, thanks to the Sun’s dispositor, Mars, transiting simultaneously through the intellectual sign of Gemini in the ninth house of the higher mind. For however intense things may get, they should balance out by the Full Moon in Libra, your home sign, on April 19th. The Full Moon in Libra will call attention back to the need for harmony, fairness, and compromise, but it will also help you come back to yourself after a time of being more strongly identified with relationships or potential conflicts in relationships during the first part of the month.

Additionally, another wave of planetary transits is moving through conjunctions to Neptune in Pisces in your sixth house of sickness, service, and work this month, and then making squares to Jupiter in Sagittarius in the third house of the mind and your immediate environment. Mercury will first conjoin Neptune in Pisces in your sixth house on April 2nd, and then square Jupiter in Sagittarius by April 12th, and then Venus will conjoin Neptune in Pisces on April 10th and then make a square to Jupiter in Sagittarius by April 15th. This sequence brings a series of divine interruptions, or a theme of hard work and service, sickness or setbacks (all traditional 6th house topics), into relation with Jupiter, the bestower of blessings and benefits. This may indicate that while you are slogging through a period of hard work or even health challenges, that a higher sense of duty or calling, and even surprise blessings in your everyday environment will help you to get through things with grace and optimism. You may also find that you are being asked to serve someone in a higher position of authority, or that during a challenging period someone in a powerful position is there to offer support or to teach you something of great value.

On April 19th, the Full Moon in your sign will bring a sense of comfort, serving to some extent to balance the relationship orientation of this monthly cycle with thoughts about your own personal development after coming through a period of relative trial.

Between April 19th and the 23rd, also, both Mercury and Venus will move through conjunctions to Chiron in Aries in your seventh house of relationships. This transit brings the opportunity for healing words, or for meaningful healing experiences in your relationships, perhaps especially around the topics of anger and frustration. You may also find unique teachers or if you are a teacher yourself, then you may engage in meaningful exchanges with students around this time.

On April 20th, the Sun will also enter Taurus and move into a conjunction with Uranus in Taurus, until the 23rd, in your eighth house of death and rebirth. This transit points to a moment of insight, clarity, and innovation or defiance. As it takes place in the 8th house, don’t be surprised if the topics involved with this moment of greater clarity or breakthrough include death or impermanence, other people’s money, or the need to face or work through an unexpected or sudden change. Overall, the insights gained from the transit, when put into motion, will likely create a deeper level of transformation in the weeks to come, as the Sun continues its journey through your eighth house well into next month.

Finally, between April 25th and 27th, Mars in Gemini in your ninth house of the higher mind will square Neptune in Pisces in your sixth house of work and service. You may feel called to act forcefully based on a vision, crusade, or higher calling you are feeling right now. However, be careful not to go to war intellectually, politically, or spiritually, for the wrong reasons. Mars/Neptune is both a picture of the holy crusade but also the delusion of religious or intellectual extremism.