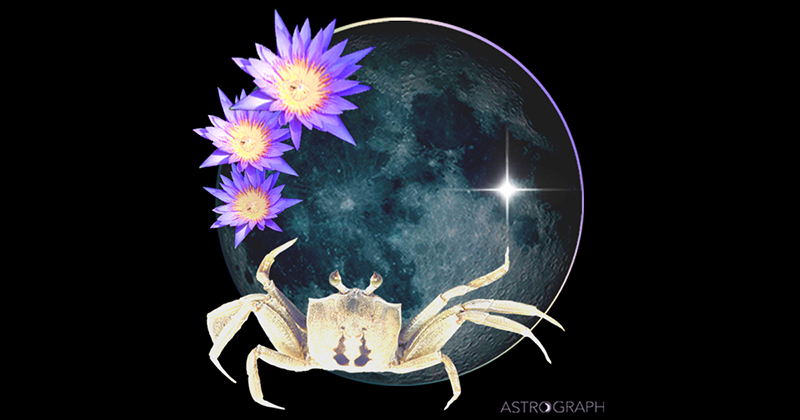 A New Moon of Consolidation and Active Relationship

Posted on July 8, 2021 in Configurations |
By Henry Seltzer for ASTROGRAPH Horoscopes

Friday evening’s Cancer New Moon taking place at about 6 pm on the west coast, later for the east coast and Europe, marks an important time of transition from the previous rather difficult June cycle that began with a solar eclipse, from June 10th, and also featured the weeks-long retrograde of Mercury through its own sign of Gemini, and as well the strongest summer timing of the Saturn-Uranus square that is the defining outer planet aspect of this tumultuous 2021 year. As we recover over the remainder of the July month, we are taking in the lessons of this recent period and attempting to decide how best to proceed from here. Mercury stationed to direct motion last month and has by the timing of this New Moon finally escaped its retrograde shadow, preparing to exit Gemini for the more feeling-oriented sign of Cancer; meanwhile the potent Saturn-Uranus square is temporarily fading in intensity. As we reassess, we note that the extreme and innovative Uranus energy is nevertheless amplified in this powerful New Moon configuration by close inner planet alignments to Uranus that promise an element of surprise, and surprising revelations, still to come over the span of the next thirty-day cycle.

Uranus is indeed emphasized in the New Moon configuration. With Saturn still in square, there are aspects to Uranus from Jupiter, Neptune and Chiron, as well as a close square from Venus and a semi-square from Mercury. Jupiter, in particular, being in close quintile aspect to Uranus, suggests that brilliant ideas are in the offing, perhaps ones that might help to get us out from under the difficult political morass that we are in as a nation and a world, torn apart by ideological dispute with the renewed danger of Covid pandemic, and with, all the while, climate change looming. Time is running out for finding the collective will to take steps to ameliorate these threats. The legend of Rome’s leader “fiddling while Rome was burning” somehow seems to apply to our current situation, especially here in the U.S. with a gridlocked congress.

The pressure that is upon us all to make massive changes in the crucible of these manifold difficulties is symbolized in a greatly emphasized Capricorn position of transformational Pluto, widely opposed by the Cancer New Moon with the Sun in close contra-parallel, while the T-square from Eris and Haumea in opposition to each other and in one-degree squares to Pluto is tightening.

Meanwhile the position of Venus in this New Moon is extremely interesting. In close forming conjunction with Mars, and in about a one-degree square with trickster Uranus, Venus is aspected as well by Neptune, Chiron, Haumea and Makemake, the latter two being new KBO planets beyond Pluto. We might expect that artistry and aesthetics, along with our most cherished values, will take on new dimensions. Strong Venus also implies that relationships are really up for us now, and will take some unusual twists and turns as they continue to evolve. With Mars there is an element of action and intensity, while with Neptune and Chiron there is a spiritual component that will do us some good if we can have the openness to be tuned to the subtle vibrational connections that exist between us all.

Haumea and Makemake, new planetary archetypes highlighted in the current configuration, represent profound connection to Nature, and to concepts of natural law, including right action and right relationship, principles that we will need to espouse if we are to eventually make it through to a better-fashioned society that is being born in the climactic, difficult, and chaotic days of this new century.

All in all, this July New Moon kicks off quite an exciting monthly cycle, and high time for innovative change to manifest. With prominent Pluto, Uranus, and Saturn, as were famously configured then, this month might take on a bit of the volatile 1960s ethos, characterized by anything goes as long as time is not forced to stand still. The one place that we can be pretty sure that we do not want to remain is in this stasis of indecision and refusal to act while Rome is burning. 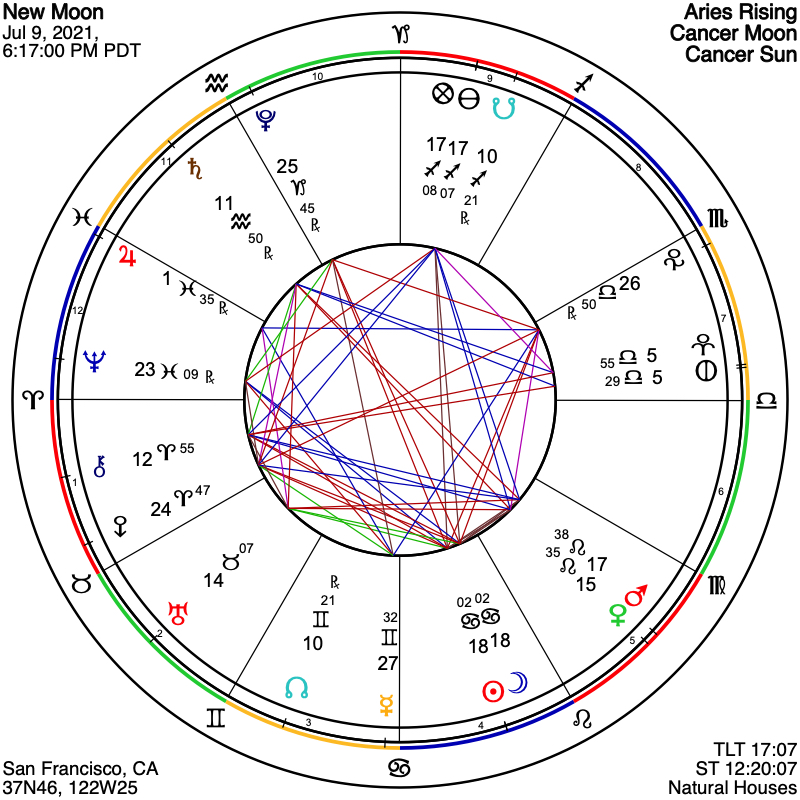 The Astrology of August 2021 The Sun is in Leo

The Last Quarter Moon is in Gemini: All day Next Mercury Retrograde
Sep 26 - Oct 18 Other Announcements
Last updated August 3, 2021