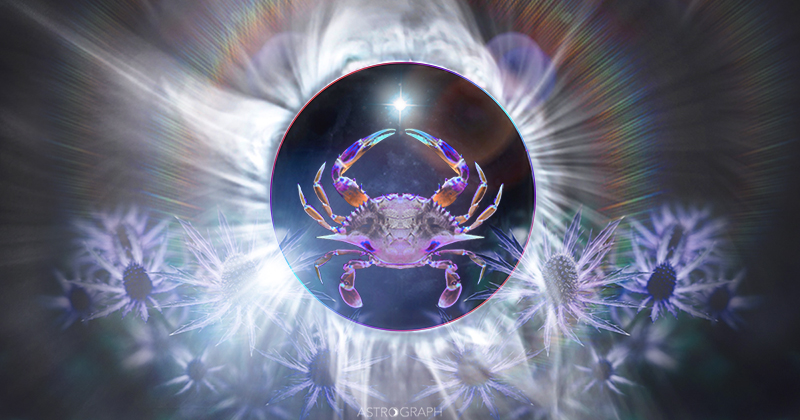 Posted on June 18, 2020 in Configurations |
By Henry Seltzer for ASTROGRAPH Horoscopes

Saturday’s New Moon and solar eclipse, taking place on Saturday, June 20th at 11:40 PM on the west coast, early to late morning the next day for the east coast and Europe, is a very significant celestial event, one that stands out, even in the midst of a climactic month of change. The powerful Saturn and Pluto presence in these late spring skies have indicated this in stark terms. In this current alignment, outer planets Saturn, Pluto and Uranus are all featured, along with Eris, in partile, or same-sign, square with Pluto, as the New Moon at 0 Cancer, the solstice degree, aspects them both. At the same time, the Sun and Moon make a near-exact inconjunct of 150 degrees to Saturn, and a septile to Uranus in Taurus. All this outer planet activation tells us something that we already knew unless we have been living under a rock, namely, as Bob Dylan quintessentially put it during the volatile 60s, the times they are a’changin’. It will be of great value to examine the nature of the evolutionary forces that are active now, and for the remainder of the year, as an astrological read-out for the massive societal changes that we are seeing, spurred on by the cultural reset of the Covid-19 pandemic.

Come senators, congressmen
Please heed the call
Don’t stand in the doorway
Don’t block up the hall
For he that gets hurt
Will be he who has stalled
There’s a battle outside and it’s ragin’
It’ll soon shake your windows and rattle your walls
For the times they are a-changin’


When Dylan wrote those lines, so applicable to today’s social setting, it was the beginning of the civil rights struggle of the early 1960s, when Uranus and Pluto were closing in on their conjunction, exact in 1965. This combination signals rapid societal change, as characterized that tumultuous decade, and also featured Saturn in opposition to their conjunction for the mid-1960s years. This decade that is now completing has seen the opening square of that original Uranus-Pluto conjunction, which was still active through the beginning of this year, and is now fading. We are in the aftermath of that alignment, but Pluto remains active, and we are still feeling the effects, especially with Pluto, Uranus, and Saturn all currently prominent in this Cancer Solstice New Moon eclipse. The essence of Uranus is new vision, and that of Pluto is transformation, so that we are seeing plenty of this energy for revolutionary change in these current skies. Jupiter is within a degree of Pluto, while Eris lies in perfect square. Eris and the new planetary energy of Haumea are in nearly perfect T-square to Pluto, with Haumea representing Nature, and natural law. This is while Uranus has been strongly aspected in every New Moon configuration of 2020, and while Saturn, retrograde in early Aquarius, is closely aspected by the New Moon alignments of May and June, including this New Moon eclipse degree of 0 Cancer. With Saturn and Uranus so prominent, representing antithetical conservative and progressive viewpoints, we have massive polarization, evident in the current headlines and on the streets. And with a powerfully highlighted presence of Pluto, along with Uranus, we have the inevitability of change, just as Dylan so dramatically articulated. The Eris component, representing a Feminine Warrior energy for deep soul intention, indicates that the time has come for each and every one of us to take a stand for his or her own deep values, whatever they might be, while Haumea indicates a spiritual path that is consistent with Nature and the precepts of natural law, Nature of which humanity is a part, along with all creatures abiding together on Mother Earth. The implication is that the environmental movement against pollution, and to battle climate change, is vitally connected with everything that is being expressed by a growing forward thinking element of modern society that sees that certain factors need to shift if we are to survive as a civilization.

The Sabian Symbol for this eclipse degree, the first degree of Cancer, is also rich with emblematic meaning for these times: “A furled and an unfurled flag displayed.” Marc Edmund Jones references, “the extremes to which an individual will go in the practical allegiances with which they meet the various situations of life… inflexible determination to further every ambition… highly profitable adjustment.” The lesson that we might be able to take forward is that, no matter what, you must unfurl the flag of your most cherished values, and join in the societal evolution of these volatile times, or be left behind in the “dustbin of history.” In closing we might also note that with the June 27th – 28th First Quarter Moon that is now a week away, Mars will reach 0 Aries, therefore squaring the eclipse degree, which signals another nexus of potentially aggressive change that will also in that end-of-month time prove daunting. This is in general of course, the challenge of this significant moment in our cultural evolution. May we each, in our own way, rise to meet it. 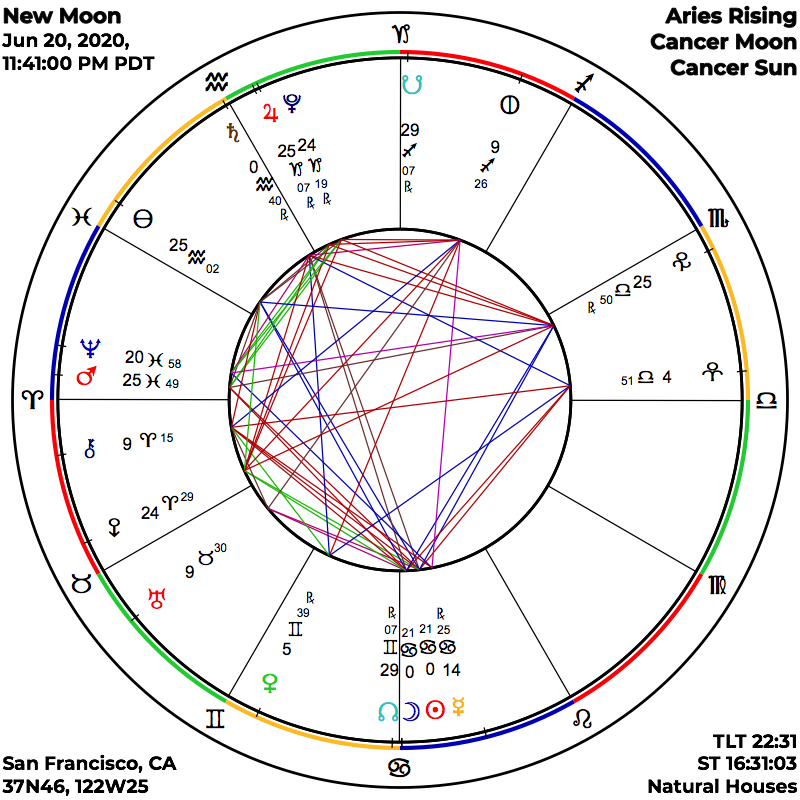