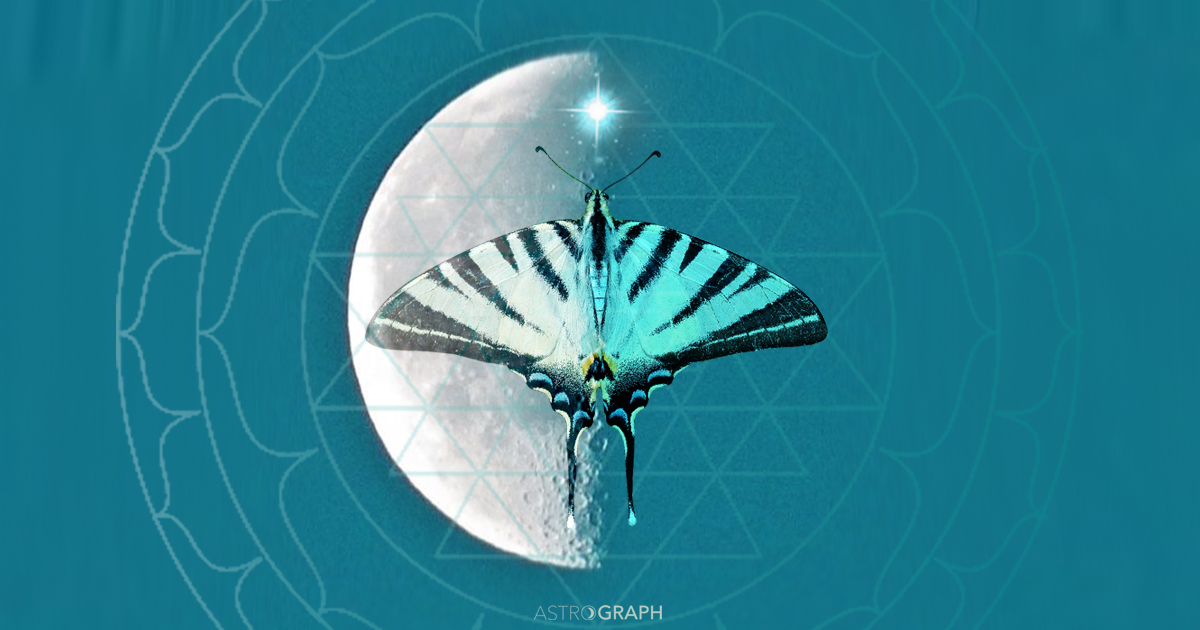 A Last Quarter Moon of Optimism and Natural Metamorphosis

Posted on April 14, 2020 in Configurations |
By Henry Seltzer for ASTROGRAPH Horoscopes

The Moon’s Last Quarter, becoming exact just before 4 PM, April 14th, on the west coast, early to late evening for the east coast and Europe, is a very interesting configuration, with the Moon, at 25 ½ degrees of Capricorn, placed at the precise midpoint of Jupiter and Pluto, these outer planets themselves less than a full degree apart. This timing of the Moon moving to the exact Jupiter-Pluto midpoint, just as the Moon also fulfills the perfection of her square alignment to the Aries Sun, could be seen as coincidental from the standpoint of the rationalistic cause-and-effect approach of modern science, and yet here amidst the Astrological worldview, we find a great deal of meaning in the precision of these degrees. This Last Quarter Moon, termed a “crisis of consciousness” by seminal 20th century astrologer Dane Rudhyar, brings to our emotional awareness all that the conjunction of Jupiter and Pluto implies: transformation, power, hopeful attitude, and a belief in the potential for a better future being able to emerge from the ashes of the past. In a further coincidence, or not, the San Francisco Chronicle headlines this day read that Governor Newsome of California has announced plans for a limited “return to normal” – with no actual date – recognizing that the new normal will only slightly resemble the 2019 society that has, in many ways, been permanently left behind. Nevertheless, this idea of the “return” echoes the sentiment across the country that there may be an actual end in sight for the social isolation policy that has saved us a greater spike in the number of virus infections, hospitalizations, and deaths. This idea of relaxing social distancing orders comes too with a caveat, from nearly all sides; because there is as yet no officially sanctioned treatment for CV disease, much less the prospect of a vaccine in less than a year’s time, it is acknowledged that it would be a mistake to move too fast. The last thing that anyone wants is a resurgence of the large-scale infection that has been nearly exponential in its rising stats over the past three months. Still, the idea that the nation might be turning the corner brings up the very subject matter symbolized at this appropriate time by Jupiter-Pluto, and invites further exploration (another Jupiter keyword) of what in the world might come next.

Whatever form it takes, what will be next will be the transformation of the pre-Covid-19 society into something different, with greater consciousness regarding the awesome power of Nature to confound us, when we stand in violation of Natural Law. And this includes the concept of societal cooperation as a pathway forward, rather than a competitive grasping for profit over compassion, me-first over consideration of the needs of all. It is possible, as we emerge from the pandemic, that greater societal awareness – and as well the conscious activity of each and every individual – will create a more thoughtful society, and one that might take environmental action far more seriously. In responding to the virus, social proclivities have had to yield to the consideration of the scientific facts of the matter, detailing in concept what remains invisible to the naked eye. The same holds true for the science of climate change as a determinant of future behavior, as we become collectively more aware of the likely catastrophic effects that are looming. It is also clear that we have, in some ways, a blank canvas before us, as we reinstate social togetherness, with the chance to remake our civilization nearer to our true hearts’ desire.

Interestingly, as we contemplate the societal transformation that we find ourselves in the midst of, this quarter moon also gives evidence of Nature, and Natural Law, becoming more prominent. There are new planets beyond Pluto that have been discovered and named in this century, and that have been shown to have Nature as their major keyword. These are Haumea and Makemake, named for indigenous gods and goddesses. For more details, see my article in the current Mountain Astrologer magazine, at your local newsstand, or online in June. These new planets are majorly configured in this potent Last Quarter Moon configuration. Haumea, at 26 + of Libra, is precisely opposed by the Sun, and squared by the Moon, Jupiter and Pluto, while Makemake at 5 + degrees of Libra, tightly opposed by Mercury and Chiron in close conjunction, is closely trine the Saturn-Mars midpoint in Aquarius, making also a grand trine in Air with a slowing Venus in Gemini, preparing to station retrograde in mid-May. These planetary patterns involving these earth-oriented Nature planets are quite dramatic, especially the T-square of Sun-Haumea-Moon-Jupiter-Pluto, within far less than two degrees all around. They speak eloquently to the urgency of earth issues involved in the current social crisis, as we lift our gaze to the future.

We are not there yet, but we might soon begin to emerge from our social distancing cocoons. Let us pray that as we do, we come out into a civilization alert to a more compassionate and earth-oriented awareness. This could actually be true on the part of all of us, including even – perhaps most amazingly – our leaders. 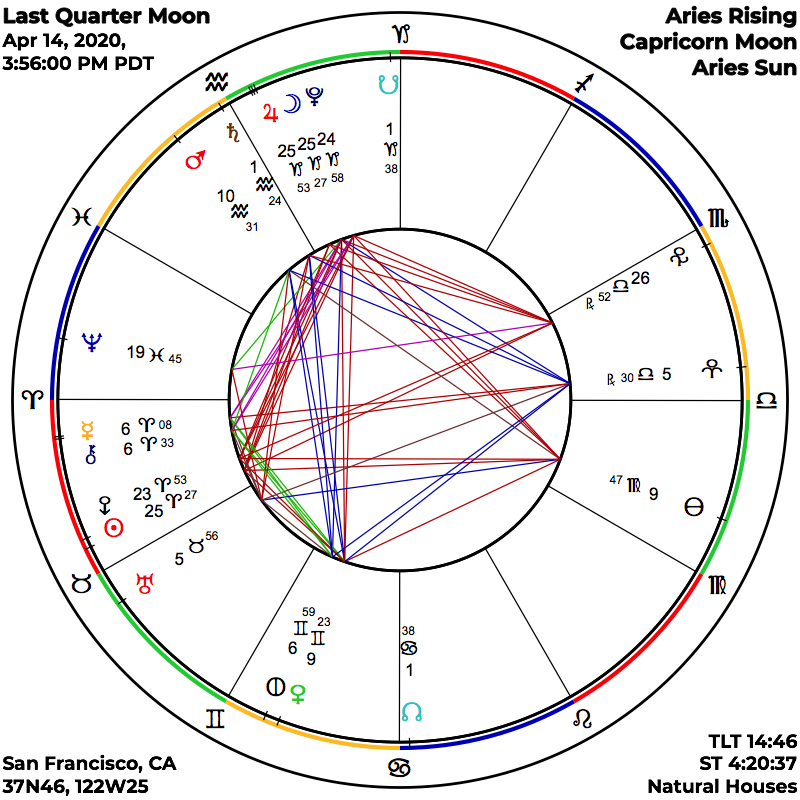