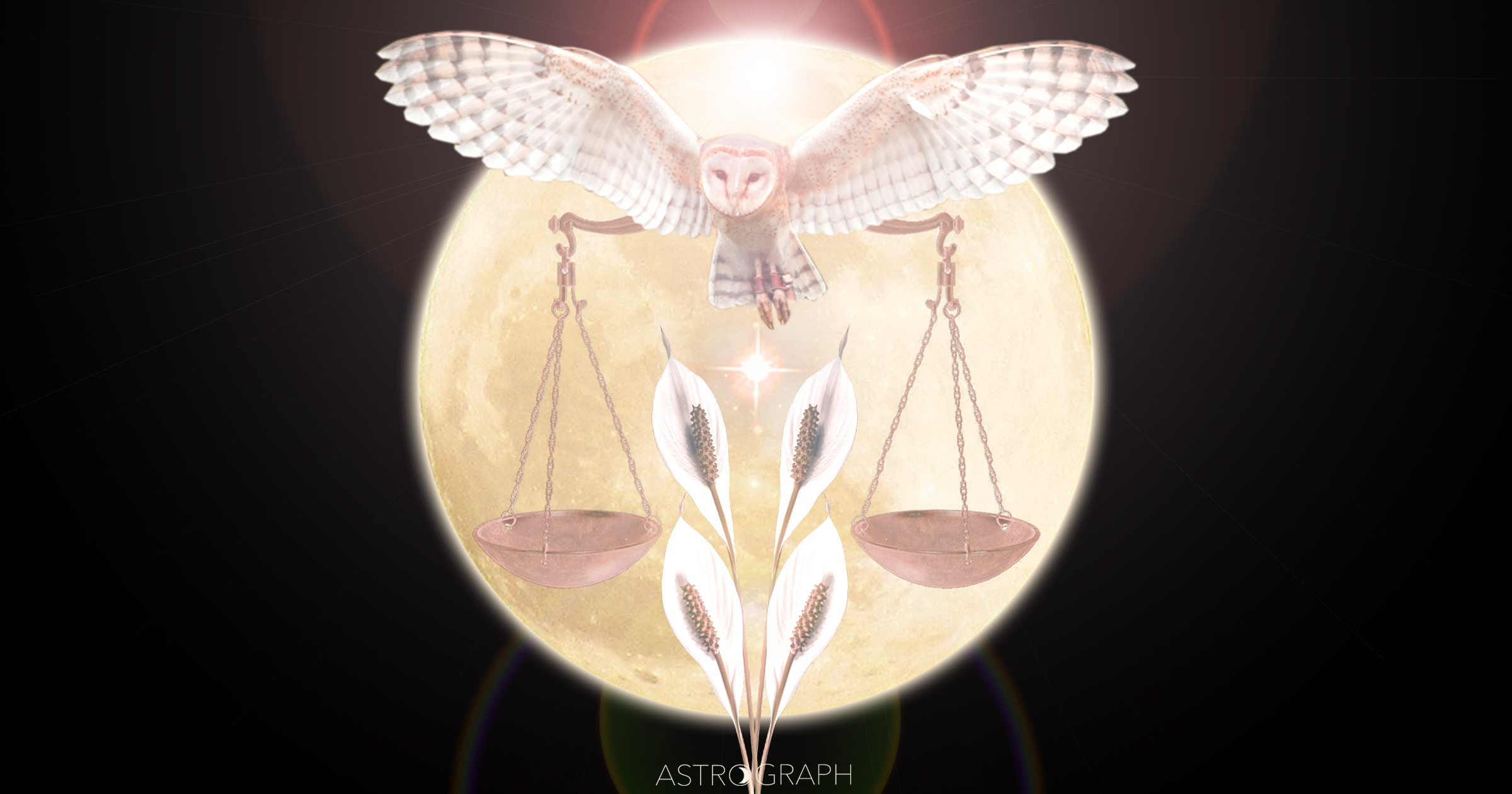 A Full Moon of Balancing the Priorities

Posted on April 6, 2020 in Configurations |
By Henry Seltzer for ASTROGRAPH Horoscopes

The Libra Full Moon of April 7th, taking place at 7:35 PM on the west coast – just at sunset, with the Moon just rising – or late evening to early morning the next day for the east coast and Europe, is an extremely interesting lunation with loads of personal to outer planet aspects. Not the least of these is Mercury in extremely close sextile to the important Jupiter-Pluto conjunction in Capricorn, itself in a wide square to the Sun and Moon in mid-Aries and mid-Libra, respectively. This implies that, for every one of us, personal evolution, whatever that might look like individually, is very much in the air. Indeed how can it not be, with all that is going on? To quote Joni Mitchell, “Something is lost, but something’s gained, in living every day.” This important configuration being transited by Mercury involving Pluto, with Eris remaining in close square, also signals greater awareness of what is actually taking place in the current cultural situation, when everyone must think and act for themselves – as symbolized by Eris, Spiritual Warrior in support of deep soul intention – if we are to get through this period. This aspect at this time perhaps also indicates an all-around improved understanding on the efficacy of the “shelter in place” orders that most states and countries have now started to enforce, as the truth about the virus spread really sinks in. A note of optimism in this regard is that there are some slight signs that the curve is flattening in places where the stay-at-home directive has been imposed early, and adhered to strongly, by the actions of that local population. On another level, additional awareness of our situation might also contain a spiritual component now, plus the realization that is likely to be a longer haul than many of us would formerly be willing to admit.

Another strong aspect in this Full Moon configuration relates also to information and mental calculation; is a grand trine in Air that is formed by Venus in Gemini trine a close Mars-Saturn conjunction that has been with us for a week now, triggering that significant combination of energies, and with both Mars and Venus in trine with the new Nature-oriented planet Makemake, which has been shown to symbolize a powerful tendency toward earth-activism. Such awareness and action is needed now, more than ever, as the danger to human populations represented by the looming climate change crisis draws ever closer. Ironically, the current societal disaster posed by the novel coronavirus threat has increased awareness of the man-made effects on the environment. This is with blue skies and cleaner river systems, as business activity diminishes, observable all over the world. It could bring up the question of what we are collectively living for, quality of life, or expanding profits ? We might also be reminded that we are now in April, with Earth Day coming right up two weeks away, so that environmental action right now is all the more timely.

Amidst these significant aspects we also have Mars, still in conjunction with Saturn, as mentioned in the preceding paragraph, in partile or same degree square with Uranus in Taurus, exact to within ¼ of a degree. Mars with Saturn is, as our resident monthly commentator – Elodie St-Onge-Aubut – says, like driving with the brakes on. You want to go-go-go, especially with such powerful Uranian impulsivity in the mix, but Saturn involved means go-stop! go-stop! and it can be somewhat maddening. On a more positive note, and we all need positivity these days, the Uranian flights of fancy are more likely to be brought into solid, practical, concrete manifestation as a result of this combination of archetypes. It is best, then, at this time, that you do not turn away from intuitive and productive impulse out of fear, but rather evaluate with a sober and practical eye your preferred choice of action. Make sure it is right for you, and then go ahead!

The Sabian Symbols for this Full Moon might shed further light on what we are all being encouraged to create, in this strange time of socially distancing, while trying to remain somehow in connection with each other. We have, for the Sun, in the nineteenth degree of Aries (or 18 +): “The magic carpet.” This symbol of worldwide recognition, and of Islamic origin, speaks to an escape route through the sky, marvelous to behold, that takes us out of a dire situation with a sacred incantation, by magical means. And this might remind us that we have indeed only to make the right gesture of mentation to magically transcend the trials of CoVid-19 sheltering and economic downturn in order to fully envision and embrace the beauty of our world, and of the human interactions so necessary to sustain it and us, as never before. Marc Edmund Jones reflects on, “the periodic expansion of one’s freedom of spirit, and of soul, through his (or her) widely winging interest in potentialities far removed from (the normal)… imaginative self-fulfillment.” For the Moon, in the same degree of Libra, we find, “A gang of robbers in hiding,” which sounds a little more dire. This symbol speaks to our fear, of which we have a plentitude right about now, and yet also to the hidden nature, at times, of a larger truth, a truth that might make the ordinary go away by sudden stealth, in the night, to find us in a different and perhaps more exciting and more hopeful world. Jones relates this to the former Aries symbol, knowing that opposite degrees in the Zodiac are somehow also united, as “the periodic exercise of one’s freedom of spirit in a complete if (perhaps) unhappy deviation from (the normal)… The reversed symbolism reveals one’s need for initiative, and for a more challenging perspective… alertness to every threat against a true individuality.” In these difficult times, when everyone is challenged to find his or her own way through, may this latter statement be so! 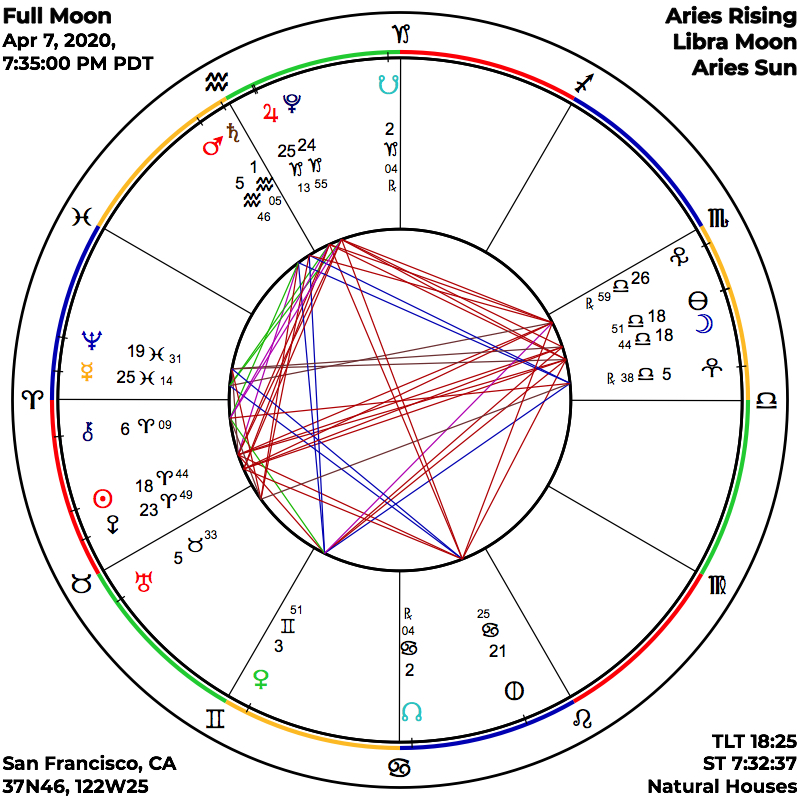