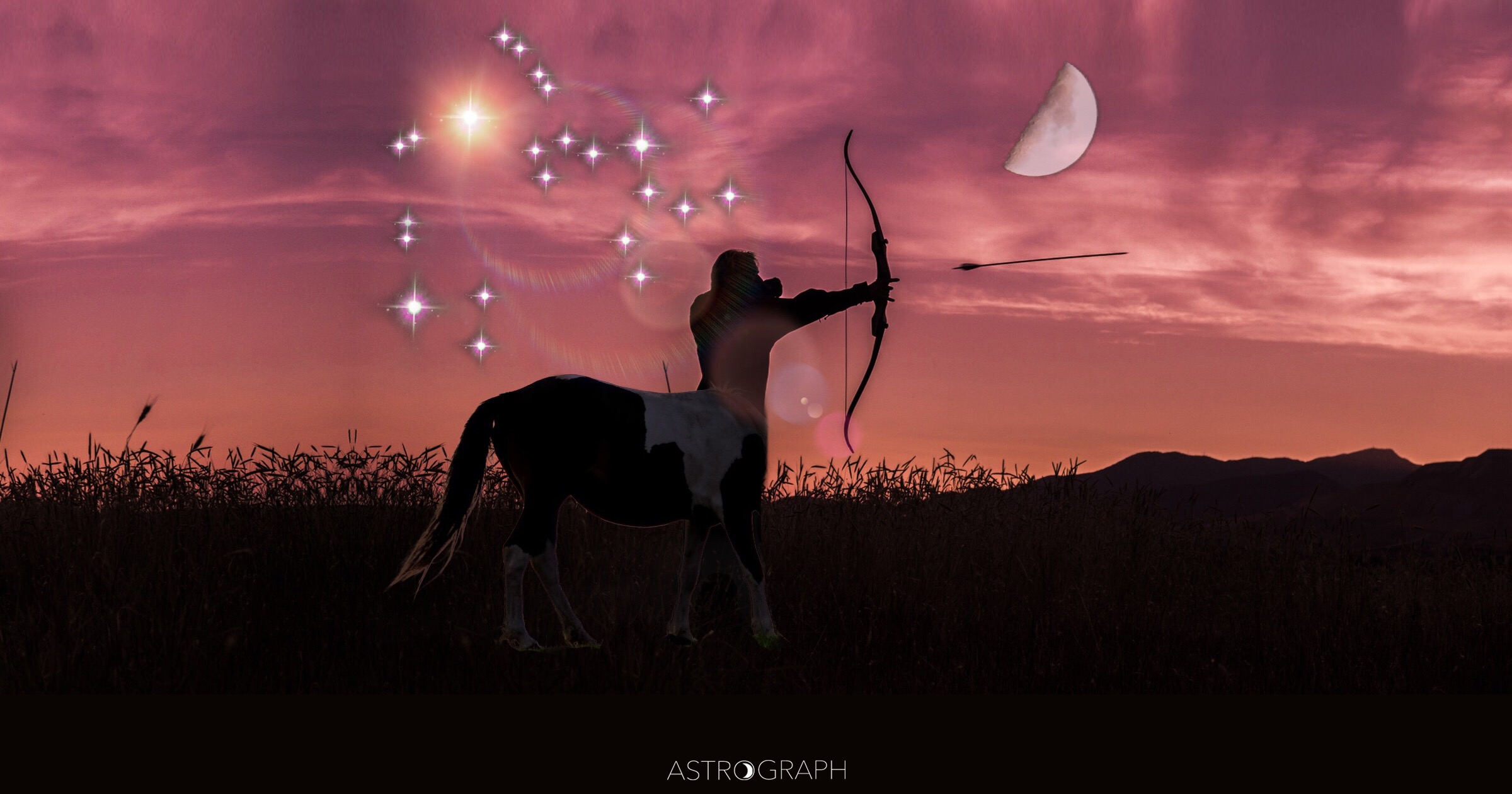 A First Quarter Moon of both Expansion and Contraction

Posted on September 5, 2019 in Configurations |
By Henry Seltzer for ASTROGRAPH Horoscopes

The First Quarter Moon of the late evening of Thursday, September 5th, early morning the 6th for Europe and point further east, is quite a fascinating one. This is because in the midst of the usual somewhat stressful Sun-Moon square alignment, we find as well that the Moon in Sagittarius is conjunct optimistic and future-oriented Jupiter, highlighting Jupiter’s own square with Neptune, while at the same time, the Sun and Mercury precisely trine Saturn, archetype of limitation and contraction. This push-pull between positive and negative, optimism and pessimism, up and down, makes for an even more difficult First Quarter Moon than normally. On the one hand we are feeling the urge to make light of our situation, perhaps (with Neptune involved) even to seek to escape reality on at least a temporary basis by means of travel, movies, or drugs, while on the other we have that constant prompt for staying with the practical, and the merely real. This could take the form of the small but effective critical voice in your head, or some authority figure coming down on you and keeping you in line. This is not everyone’s favorite thing, admittedly, but at times a necessary reminder. The situation is made even more poignant by the fact that Jupiter and Saturn are each strengthened by occupying the signs that they rule, Sagittarius and Capricorn respectively. What is starkly clear is that amidst this energetic tug-of-war, the final choice is yours and yours alone; discrimination must therefore be employed. Sometimes it will be the entirely right thing for you to do, to sail forward into new dreams and schemes, without fear, and with no regard for imagined negative consequences, while at other times it will be right to hold back. The decision is ultimately up to you, so that you benefit when you think deeply, and choose wisely.

Jupiter and Saturn are also called “social planets,” so that this startling configuration presages next year’s massive cultural transformation, as indicated by the triple conjunction of Jupiter, Saturn, and Pluto in mid-November of 2020, followed by Jupiter and Saturn conjunct in Aquarius on December 21st. Jupiter-Saturn conjunctions happen every 20 years, right on the decade, and this will be first one in many years taking place in an Air sign, another indication of major societal shift being in the works over the next fourteen months. Forewarned is fore-armed, and we all will profit from the effort of staying as alert as we possibly can to the societal evolution that we are all participating in, as this climactic decade wears down to its close.

With this current lunation it is also the case that, as in the recent Virgo New Moon, all the outer planets, down to Saturn and Jupiter are involved. Saturn and Jupiter remain in almost perfect parallel to transformational Pluto, Neptune is squared by Jupiter, and the Moon is bi-quintile Uranus by less than one degree. This implies transformational activity and evolutionary development. Plus, with Jupiter, Saturn, and Pluto involved with each other, this again suggests the rather more dire symbolism of the end of 2020, on both collective and individual levels. There is some form of structural transformation now going on in your own life and you must seek to embrace it, to facilitate it, and to understand how facing up to this inner reality can also aid in the evolution of society. Each person must first of all recognize that we are, each of us, part of the situation. Rather than bemoaning our fate, that whatever we might be able to do is but “a drop in the ocean,” we do well to remember that the ocean itself is made up of nothing but those very drops. Every action counts, and affects every other activity all around us. There is thus a holographic effect whereby the individual represents, somehow, the whole. All your actions have their effects. Dunne wrote that you must “never seek to ask for whom the bell tolls,” in a funereal way, but rather recognize that “it tolls for thee,” and the same idea is true for each and every positive action that you can manage to accomplish.

The Sabian Symbols for this quarter moon are also, as usual, inspirational. They are, for the Sun, in the fourteenth degree of Virgo, “A family tree.” This symbol might remind us of the way that individual strengths and weakness becomes wider in their effects, as they are passed down (and around) to others. Marc Edmund Jones remarks upon, “the extent to which an individual will live the lives of his or her forebears, or accept the guidance stemming from them through their spiritual presence.” For the Moon, in the same degree of Sagittarius, we find, “The Pyramids and the Sphinx.” This somewhat enigmatic symbol coveys the essential mystery of our existence, and also of the way our social matrix descends to us from its ancient past. Jones refers to “man’s enduring works” and “the fabric for a fellowship of creative capacity [giving us] an assurance and a self-sustainment.” Indeed, we may take heart from the examples of these archetypal degree symbols active in our current sky and seek, as time grows short, to do our very best to make an effective impact, for ourselves, for our evolving culture, and for the generations to come. 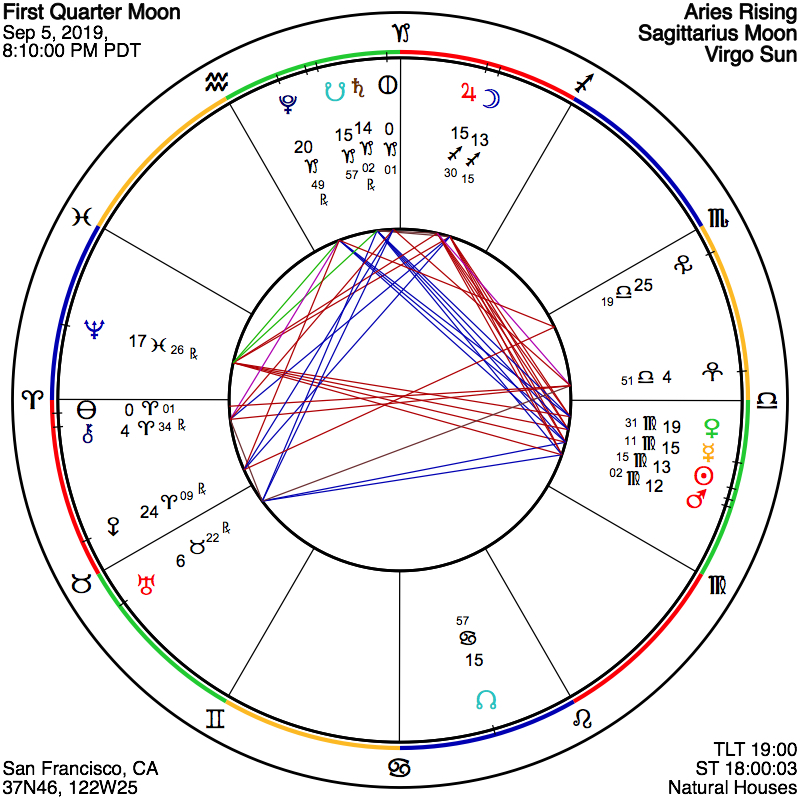 Chart for the First Quarter Moon on September 5, 2019