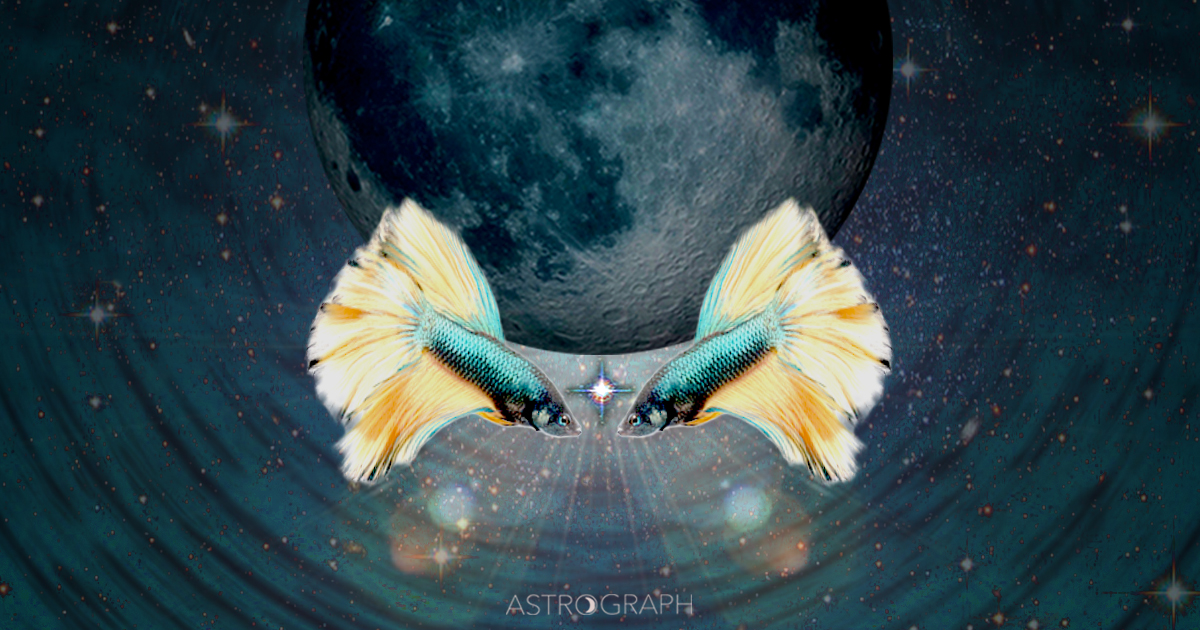 Posted on March 5, 2019 in Configurations |
By Henry Seltzer for ASTROGRAPH Horoscopes

Wednesday morning’s Pisces New Moon, taking place on March 6th, is quite a potent lunation, featuring all three classic outer planets, Uranus, Neptune, and Pluto, known to be fundamentally transformational in their symbolism. Uranus, the Awakener, opens you up to novel possibilities in your life, which implies new ways to escape old ruts. Neptune, the Dissolver, emphasizes the spiritual factor in all of this, as well as the basic unity of humanity at large; Neptune gives us the compassion that arises out of the simple yet profound fact that all other humans are members of one’s own body. Pluto, the Transformer, associated with death and rebirth, encourages – at times extremely forcibly – letting go of the dysfunctional habit patterns and instances of reactivity that are holding you back. All this is up for everyone in these dynamic days, with Uranus and Pluto remaining still in their square alignment that characterizes this divisive decade of the “turbulent teens.” According to noted astrologer Richard Tarnas, using a 10-degree orb for this world transit, these effects of major societal and individual change last to 2020. Neptune, which brings an otherworldly and essentially spiritual component to these effects, has been featured in recent lunations; most notably by his close conjunction with Mercury in the recent February Full Moon. In the current configuration, Mercury is newly retrograde, in the final degree of Pisces, while the Sun and Moon at 15-plus of Pisces are less than ½ degree away from a perfect conjunction with Neptune, and in close semi-square with Uranus, newly entered into Taurus. Pluto, meanwhile, is in perfect parallel with Saturn, practically to the minute, and is in square within less than one degree with the new planet, Eris, in Aries. Eris, a Feminine Warrior energy in support of soul intention, has been shown to be quite significant in charts, and magnifies everything that she touches, including massively changeful Pluto! We are deep in the transformational stew, no doubt about it, and the only question that we need to ask is which way to respond to this powerful moment, and to grow.

Uranus is important in this timing, because this trickster archetype symbolizes the process of intuition, and can therefore help us find our best way forward. The major lesson of highlighted Uranus is that we stay open to possibility, or as open as we can. With Uranus, all bets are off, and sudden new ideas are plentiful, so that enlightenment beckons us, to quote Grateful Dead lyricist Robert Hunter, from “the strangest of places.” This is especially true with Jupiter in the mix, and while Jupiter is not in close connection with Uranus right now, he is also quite strongly placed, vitally connected with Pluto and with Eris, being closely trine Eris, and both parallel and in partile semi-sextile to Pluto within 4 minutes of a degree! With strong Jupiter, and with Uranus in significant emphasis, and in the self-reflective context of Mercury in retrograde, we have before us a real opportunity to see our way clear to our next stage of growth and development. It is a great time to meditate on who we truly are, and how best to actualize that basic authenticity we all harbor inside ourselves. After all, the best time to take action on what fundamentally needs to happen in our lives is right now.

Another highlighted factor in this New Moon is the presence of Chiron, the Wounded Healer, at 0 Aries. This first-degree-of-the-zodiac presence is encouraging you to take action on what you know about your own early wounding, and how you might begin to move beyond the conditioned responses that arise as a resultant factor from the pain that has been locked away inside yourself for far too long. Chiron is aspected by Uranus in the same degree of Taurus, and by a close conjunction with stationing Mercury, less than 2 degrees away, and also in parallel. This is quite a strong and also introspective potency of Chiron! In order to make the most of it, you might want to consider moving ahead with the courage of your internal convictions, and as well your intuition, to make something start to happen in the difficult area of acknowledging where you are in fact wounded, and where you may yet manage to be healed by dint of your own exertions. It does take work, and yet the future rewards, as symbolized by all this current outer planet emphasis, are well worth the struggle.

The Sabian Symbol for this New Moon is, as usual, helpful in orienting ourselves to our evolutionary quest. It is, for the sixteenth degree of Pisces, “The flow of inspiration.” Marc Edmund Jones, who caused these symbols to be created in the 1920’s, remarks upon “the spiritual power which the development of civilization has brought to a point of practical potentiality, and on which each person may draw in meeting any or all critical issues of everyday living.” He goes on to state that one is oneself to the extent that they are able to “put their talents and skills to a real test, welcoming each new challenge to their competency.” Indeed this is the dare of these fractious times, to proceed ahead, in “damn the torpedoes” fashion, fully inhabiting our own selfhood. By recognizing the actions that we absolutely need to embody, and taking them, we thereby assume our birthright, becoming the most authentic version of ourselves that we can muster. 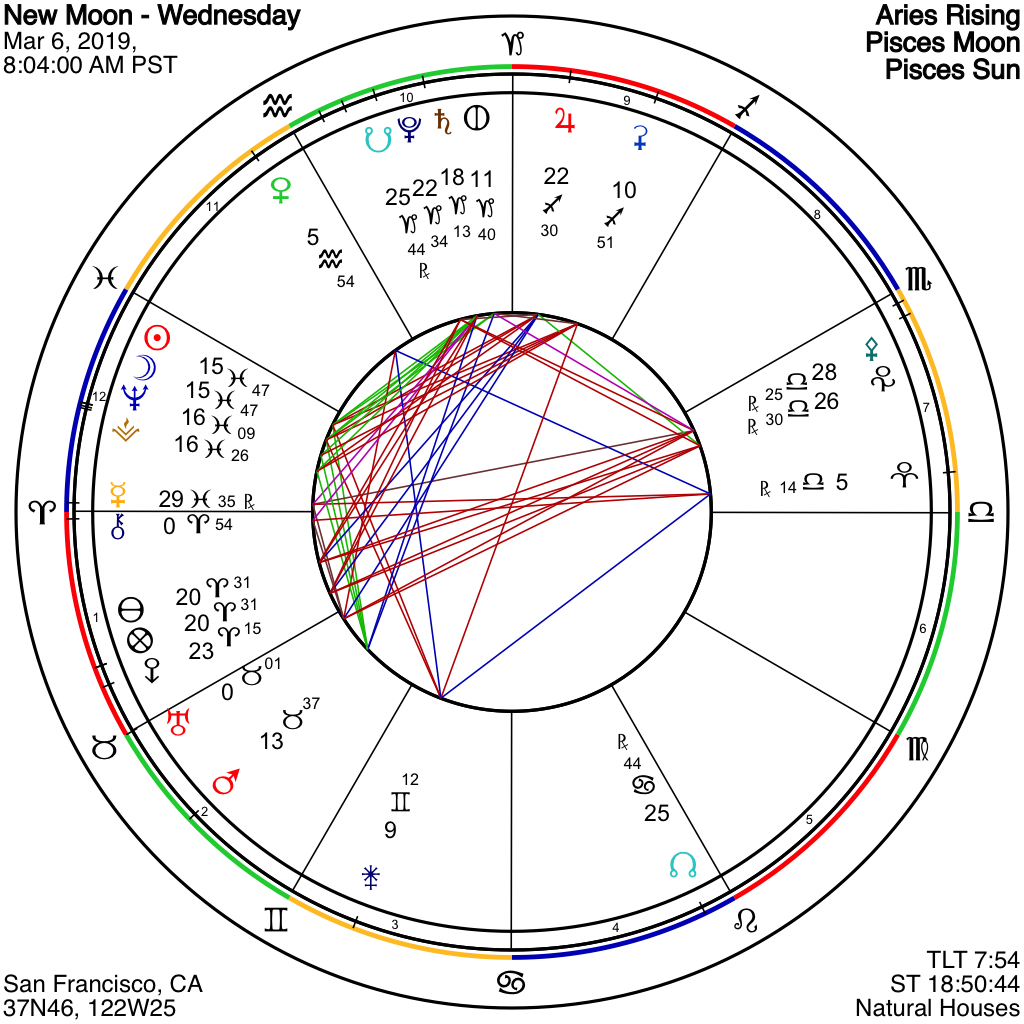