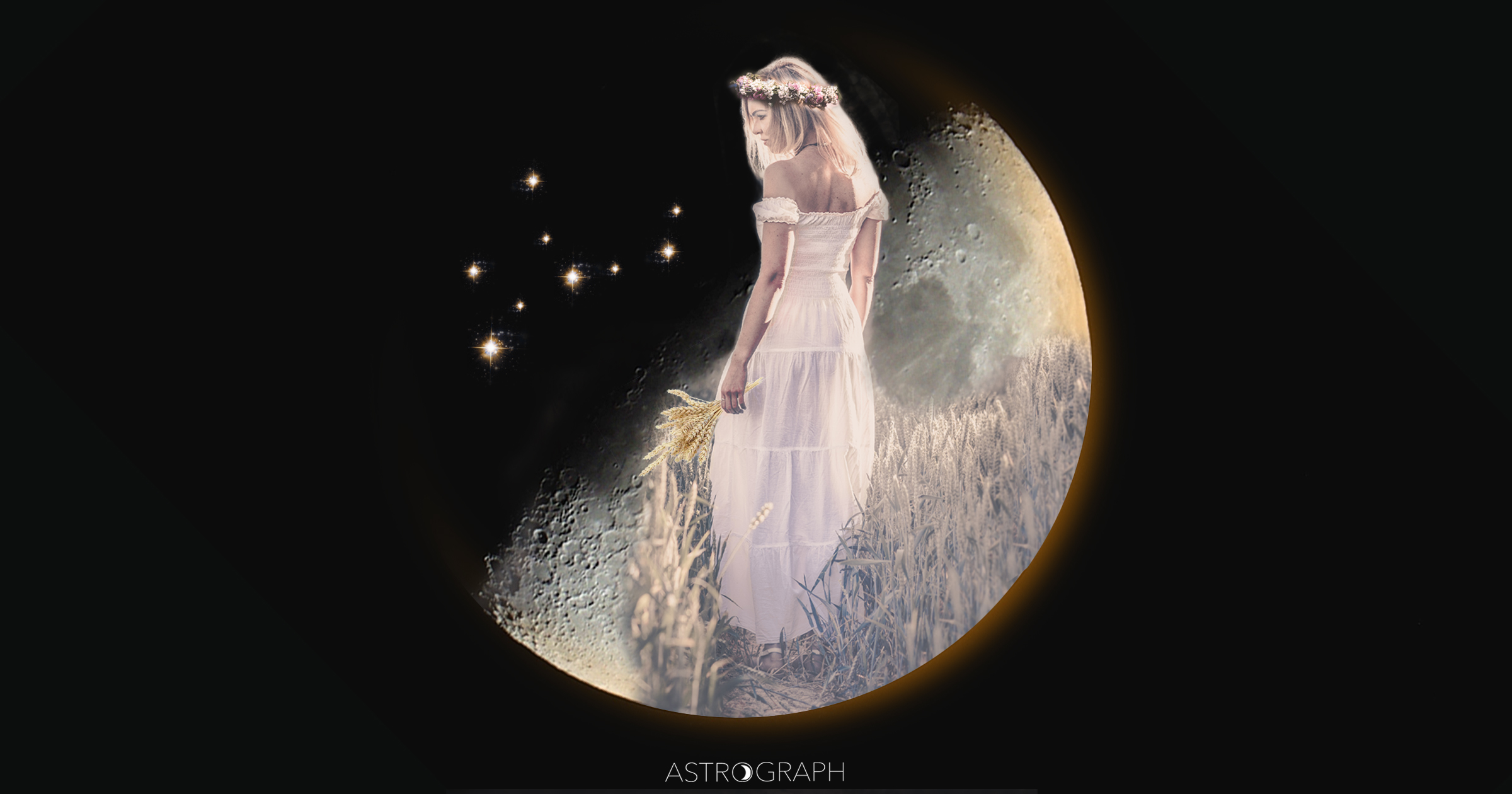 Posted on June 8, 2019 in Configurations |
By Henry Seltzer for ASTROGRAPH Horoscopes

Sunday’s First Quarter Moon brings many of the astrological factors together that have been enlivening recent lunations – and our own social and individual lives – for many months now. That is because the Sun and Moon, at 19 + degrees of Gemini and Virgo, closely aspect Jupiter, Saturn, Uranus, Neptune and Pluto! With all three of the traditional outer planets thus so greatly highlighted, and as well the social planets of Saturn and Jupiter, themselves in partile semi-sextile with each other, we have an interesting collision of energies coming our way this weekend! The Sun is partile or same-sign opposition with Jupiter, found in his own sign, and therefore even stronger. The Sun and Moon also closely aspect, by square and opposition, otherworldly Neptune, about to station this month, and therefore highlighted as well. This lunar phase in any case represents a time when the rubber meets the road; when the seed ideas of the New Moon from a week ago get tested to see if they can withstand challenges to the purity of that original impulse. Since the recent New Moon featured a strong Pluto, this juncture, too, speaks to that peak of transformational energy. We will want to ask what is our attitude toward major changes coming down? Very few are truly comfortable with it, because change implies letting go, which is never easy. With Eris remaining in the mix of archetypal energies, we have a great deal of inner fortitude and determination to meet the challenges of these times. And, in this powerful First Quarter Moon configuration, with so much Neptune and with strong Jupiter as well, we will have the spiritual resource implied by these two planets, now in close aspect to each other, to fall back on.

The transformational nature of these times that we are living through implies that one of several responses must be employed to cope, and the first of these is denial, that old river of lack of response to current situations, even as they exacerbate with each passing day. Sooner or later, this becomes no longer tenable, and the good news here that each one of us has our own threshold of when to bottom out. It is a choice. When that decision time comes, as it inevitably must come, the other two actions remain: to knuckle under, inhabiting a victim role, or else to fight for renewed determination to survive, and for finding ultimate meaning. The spiritual component of this latter response is the notion that literally everything in this universe serves to further our evolutionary growth. Thus, there is no such thing as a “bad” transit to our natal charts, or a bad situation to live through, only poor responses to these. And even those less-than-perfect reactions can be seen as positive; as necessary steps along the path to better ones.

Given this context, we can view the extreme outer planet archetypal combinations with the Sun and Moon in this First Quarter Moon in several ways. The Neptune emphasis in particular can be taken as escapism or falling for deceptive information that masks itself as truth, the proverbial “fake news” that is the easy answer to any unpleasant facts that may arise. Such confusion here below is the province of Neptune, which also however signals a spiritual recognition of higher purpose in all things. It is up to each of us, in our individual discernment, to try to tell the difference. The strong Uranus presence combines with Neptune to foster new ideas and ways of seeing that go beyond current limitations in order to to seek solutions to seemingly intractable problems such as climate change, also powerfully represented in these June skies. Here, I refer to the highlighted presence of Haumea, still partile opposed to Eris and square Pluto, forming a T-square, and of Makemake, which remains in close aspect to both Chiron and Uranus. These other recently named planets, called “dwarf” by the astronomers along with Pluto, do seem to represent connection to Nature, and to earth issues, which are increasingly prominent in the current Zeitgeist. Uranus symbolizes as well the deep process of intuition, which might be quite significant in enabling us to navigate the troubled water of these fractious times.

In another noteworthy factor in this quarter moon configuration, the close aspects from the Sun and Moon to limiting and material Saturn suggest both the extreme polarization that we feel within ourselves, and see all around us, and also the availability of concrete practical manifestation for the wild possibilities that may suggest themselves as we struggle to find our way forward. The brighter side of all our issues is that their forward-going solution is only, as Paul Simon so succinctly puts it, “only a motion away.”

The Sabian Symbols for this First Quarter Moon might supply additional perspective. They are, for the 20th degree of Gemini (19 +) where we find the Sun, “A cafeteria,” and this reminds us that we are, in fact, all in this together, all eating at the same small table. Marc Edmund Jones has, “[We] organize our own special experience for the benefit of the community at large.” For the Moon, in the same degree of Virgo, we find, “An automobile caravan,” a symbol that strikes a similar motif of togetherness, and that also, of course, especially resonates in today’s America. Jones writes of, “nature’s prodigality as revealed through mankind’s genius for multiplying the facilities of modern life… an exceptional capacity for producing expanded dividends in every area of human activity.” May it be so! As we steel ourselves to face the issue of excess carbon in our atmosphere, coming upon our civilization like an express train, we will need all the innovation that we can mutually muster. 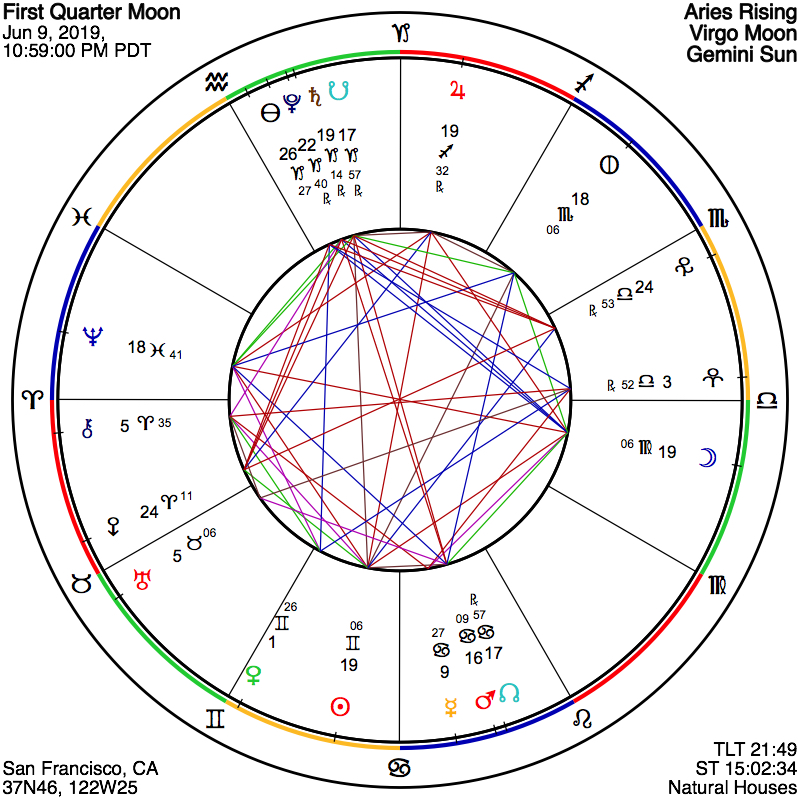