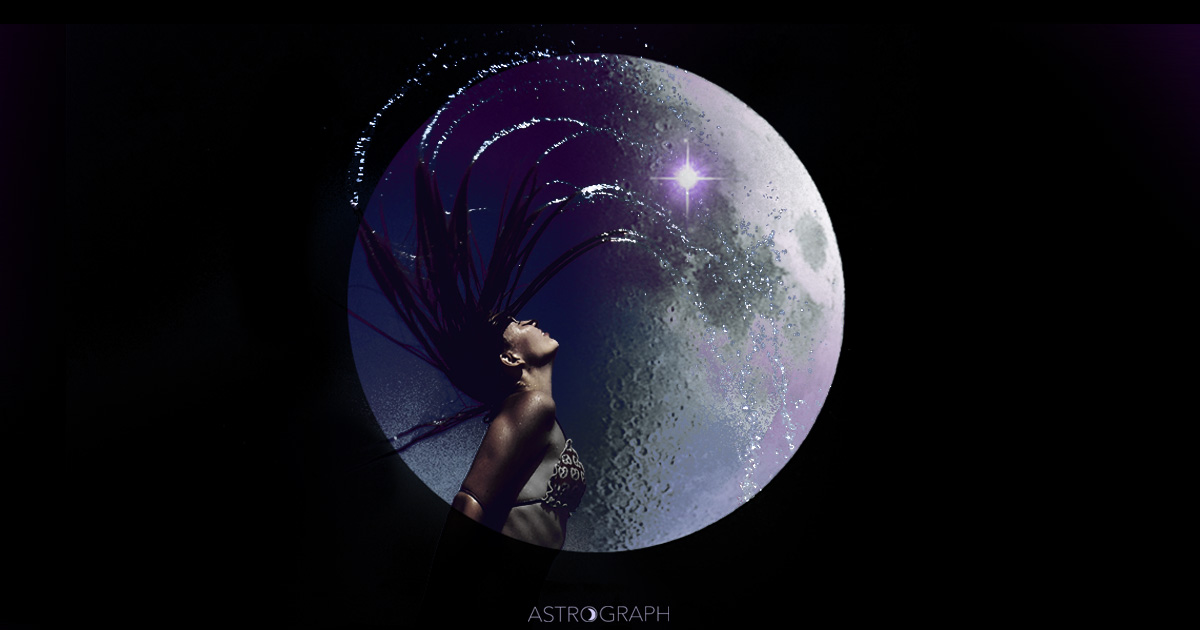 A First Quarter Moon of Surprises and Development

Posted on November 14, 2018 in Configurations |
By Henry Seltzer for ASTROGRAPH Horoscopes

Thursday’s First Quarter Moon in Aquarius, taking place early on November 15th, presages an action-oriented week leading up to another dynamic lunation on Thanksgiving Day. That is because this quarter moon configuration possesses both strong Mars and strong Venus, as well as a decided emphasis on the new planet, Eris, which represents a Feminine Warrior archetype in support of soul intention. The astrological cards are stacked toward contention rather than giving in, but with Venus involved, the hope is for the effort to be peaceful and diplomatic as the overriding factor. It is interesting to note that this lunar phase, which follows last week’s powerful New Moon in mid-Scorpio, traditionally tests the viability of what was engendered at that timing, representing a crisis point of the new birth, as the seedling struggles to break through. In the collective and in our individual lives, we are seeing what we can achieve amidst the inherent difficulties contained within the necessary evolution of our life’s direction. What is required, then, is the strength of our convictions in spite of everything as we attempt to make manifest what was implied by last week’s originating impulse. Looking outside of ourselves, we can see this most clearly in the national politics of the United States, as the democrats try to consolidate their gains and the republicans try hard to deny them, by rhetoric and by legal challenge.

This is indeed a fascinating First Quarter Moon configuration. The Sun and Moon at 23 + degrees of their respective signs are just 4 minutes off from making perfect aspects to Eris in Aries, an inconjunct and a sextile. Furthermore, the midpoint of Eris and Uranus, 26 + of Aries, continues the same aspects as in the recent New Moon, being opposite Venus and the other prominent new planet in these November skies, Haumea, an Earth Goddess energy, in Hawaiian mythology the mother of Pele. That’s a lot of Eris energy and the zeitgeist has already been acknowledging that influence, with all kinds of people advocating for standing up and being counted, fighting for what they believe, and celebrating their win in the recent US election. Mars is also a large part of this picture, being six degrees away from the Moon, and located at 29 + degrees of Aquarius, in partile sextile to Uranus. With both Mars and Eris so greatly highlighted, this First Quarter Moon signifies a very active time, when everyone is battling for what they want. With Eris emphasized, the additional message is that you are admonished to be sure of what it is you do want. Illusion is prominent in this week’s timing as well, with a stationing Mercury exactly square to Neptune, so that it is difficult to know what is the real truth of the matter, and where we actually stand, but it has never been more important that we comprehend this, and once we know our most sincere intention, to act upon it.

Haumea is also greatly emphasized in this First Quarter Moon, precisely conjunct Venus as she stations one day later on the 16th, and 30 minutes of a degree off from exactly opposing the Eris/Uranus midpoint. Then, too, Mars and the Moon, in Aquarius, with the Moon at 23 + degrees and Mars at 29 + degrees, form nearly exactly the same midpoint degree in Aquarius, 26:29, therefore trine Venus/Haumea. That’s a lot of Haumea. This week, and as well in the Full Moon weekend that follows, gives us an excellent opportunity – through to beyond the end on November – to better understand this new archetype. Haumea has to do with “profound connection to Nature,” a characterization for which I have found a great deal of evidence. Last week, I spoke of earth issues rising to the fore, and one would also say, with Uranus involved, in unexpected ways. Subsequently the worst wildfires in California history have emphasized in an entirely tragic manner that issues of the planet, specifically those concerning global warming, are absolutely vital to the survival of our society. Scientists agree that rising ambient temperatures and dryer conditions will likely be responsible for worsening wildfires in this west coast locale, not to mention rising sea levels that will be devastating to other parts of the world. It is manifestly becoming more and more obvious that no rhetoric on the part of deniers will change this simple and inescapable reality.

It is also relevant that the Haumea archetype has as well a quite positive component of connection to Source, as my research has been able to show. Not all the manifestations that are highlighted this month will be so negative. Another significant theme will be the spiritual implications of recognizing other life forms, and indeed other people, as valuable. With climate change, the important thing to recognize is that we must acknowledge it and begin to work on it, and that the battle will take everything we’ve got. It’s high time for a gigantic “Manhattan Project”-style effort to reverse the effects of the accumulation of methane and carbon dioxide in the atmosphere, and for that we will need as a society to come together for a change instead of falling apart. As Benjamin Franklin once remarked, in a different context, “we must all hang together now, or we shall surely all hang separately.” That the Venus-Haumea conjunction is in diplomatic Libra might give us cause for hope that even in the relatively short term, the warring factions of this country’s politics could begin to see a way of beginning to work together.

The Sabian Symbols for this First Quarter Moon are also of great interest. They are, for the Moon in the 24th degree of Aquarius, “A man turning his back on his passions and teaching from his experience.” This symbol is almost self-explanatory, and supports the idea of a cool head that even under the pressure of events will not act from impulse. Marc Edmund Jones, who caused these symbols to be created in the 1920’s, references, “an outer selflessness,” and “a sensitiveness to the world and its exactions.” For the Sun, in the same degree of Scorpio, we find, “Crowds coming down the mountain to listen to one man,” a veiled reference perhaps to the biblical story of the “sermon on the mount,” where the man is the Christ, and which could therefore represent the Christ within each of us. Jones remarks that, “this is a symbol for recognition of intellectual attainment, and of the supremacy of spiritual over other and more tangible forms of authority.” He goes on to state that, “any higher realization must be brought to earth for its initial confirmation and its ultimate sharing among the many.” Indeed, it is also high time that we acknowledge an effective moral compass, rather than gains for merely material circumstances, as we judge our own efforts to move forward with our destined evolutionary development, along with those of our leaders. This takes a great deal of courage, and the road to this ideal is far from easy, and yet the ultimate rewards are essential to life itself. 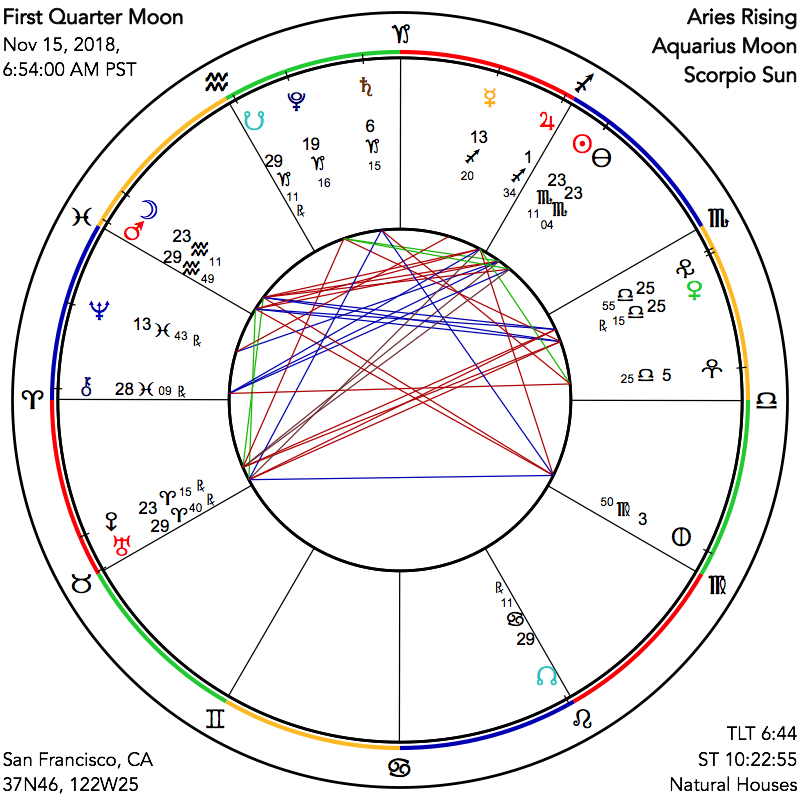