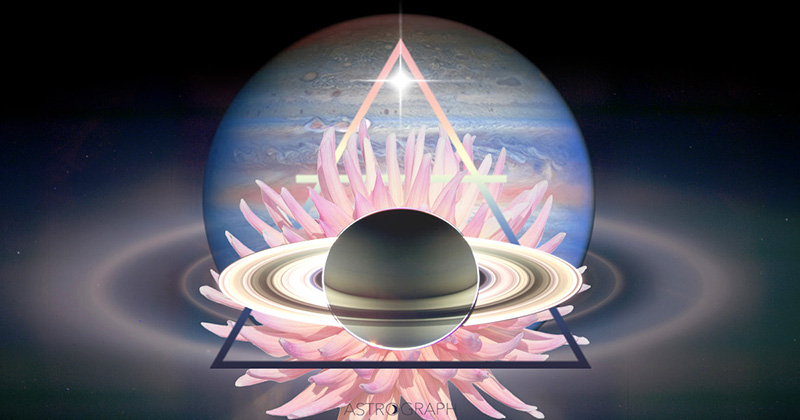 Posted on December 18, 2020 in Announcements |
By Leslie Benson for ASTROGRAPH Horoscopes

As the planets do their circle dance around the Sun, many meaningful cycles and patterns emerge that can help us understand and relate to the unfolding of happenings in our earthly realm. One of these cycles is the joining of Saturn and Jupiter every 20 years in what we know as the Great Conjunction. On December 21, 2020, we will experience this astrological phenomenon as these two “social planets,” redolent of our communally understood agreements and arrangements, and their changes, conjoin at 0° + of Aquarius. In this instance, their conjunction is a very special one, as it signals more than just the beginning of a new 20-year cycle. For the past 200 years (with the exception of one instance in the 1980s) these Great Conjunctions have occurred in zodiac signs of the Earth Element. Now, and for the next approximately 200 years, they will be in the Element of Air. This is indeed significant, signaling the seed moment of a society to eventually emerge that is less concerned with the physical realm, and its rewards in terms of financial considerations, and more concerned with inter-connectedness and the full spectrum of our human experience.

Not only that, this conjunction is also in coincident timing with the Solstice, and itself takes place at the very first degree of Aquarius, so that the Sun, Jupiter, and Saturn are at the very same degree of their respective signs. This is also occurring just a week after the last Solar Eclipse of 2020. This Capricorn Solstice event therefore signals a very important turning point for our planet, and for the evolutionary development of the human race, and indicates also a shift that will slowly emerge in the first half of 2021 – as described in the startling and meaningful patterns in these significant charts.

Let’s explore some of what this means for humanity, as well as how we might look for and work with these influences in our own lives. Jupiter and Saturn, known as the social planets, represent the middle territory between the inner personal planets (including Sun and Moon, plus Mercury, Mars and Venus) and the outer transpersonal planets (Uranus, Neptune, and Pluto). These two thus represent expressions of the consciousness that shapes collective humanity, in the various forms of our society. Therefore, integrating the lessons of these planets can help us become actively contributing members of civilization and culture, and their cycles mark important stages in this global development and growth. Individually as well, Jupiter symbolizes the aspect of human nature that desires to expand into and explore new territory – both literally and figuratively – and helps us shape our ideals, overarching belief systems, and philosophy of life. Saturn in turn helps us find structure, also to conserve and make use of what we’ve already created, and to delineate who we are. We absorb the maturational stages represented by Saturn transits as more fully individuated beings, coming into a better sense of duty and responsibility.

These considerations of the Jupiter and the Saturn astrological archetypes, especially in combination, equally apply to the collective evolution of our society. As these forces in their Great Conjunction switch from the Earth element to the Air element in this significant 2020 time, we may see a cultural turning of awareness away from the tangible and physical movement of goods and resources (Earth) and more towards the movement of information, and this includes connecting with and understanding invisible forces of energy and frequency. In future there will be a greater emphasis on concepts and communications (Air). Because the conjunction takes place in the very first degree of Aquarius, we may see a striking turn of societal patterns and trends moving toward Aquarian themes, humanitarian efforts, even greater reliance on technology and innovation, as well as more freedom and tolerance toward different perspectives; diversity! Although not all of this will happen right away, this could ideally look like an influx of brilliant problem solving in the context of the myriad of crises we are facing in our world, and could also manifest as further developments and maturation in our collective understanding of technology, the internet, and each other. There will ultimately be more ways to utilize our interconnectedness for the Greater Good.

This emphasis on Aquarius could also appear as a more wide-spread freedom and acceptance of ways and views that are considered as “unconventional.” Those who are born under this influence will undoubtedly represent a generation that knows the value of marching to the beat of their own drum. We could also see a rise in popularity in other Aquarian-esque technologies and concepts like virtual reality, crypto currency, multidimensionality, and as well astrology – considered to be an Aquarian topic!

In less than ideal turnings, we could also see the problematic sides of the human relationship to technology come more crisply into view. The detrimental effects of technology addiction are already being studied and documented, particularly with regards to social media, and our mobile devices, and we may see a rise in such behaviors, as well as a clearer understanding of the negative effects this has on the human experience. We may also see an over-reliance and emphasis on technology as the way to solve all of our problems, so much so, that there is a further forgetting or disconnect with nature and earth as an integral source of health and well being. In contrast to this latter fear, there are also on the rise, and involved in these eclipse and Solstice configurations, new Kuiper Belt planets whose archetypes seem to represent greater human connection with nature, and with Natural Law, as well as the overwhelming concerns about climate change, as our founder Henry Seltzer has been researching and commenting upon.

For each of us, individually, we can reference our own detailed birth chart to determine what this turning of the zodiacal spheres might have in store. Those who have placements at the early degrees of Aquarius or of the Fixed Signs of Taurus, Leo, and Scorpio, will be most influenced, and placements in the early degrees of the other signs will also feel the heightened impact of this Great Conjunction. A straightforward way to determine meaning would be to check which house Aquarius rules in your birth chart, and know that the area of life represented by that house will be undergoing both an expansion and as well a refinement in the coming months. You can also look to the placements of Jupiter and Saturn in your chart for further clues as to how this end-of-year timing will affect you. The later degrees of Cardinal signs, especially the 23-degree mark, will also of course come into play considering the massing of late-Capricorn and late-Aries energy there for this entire year.

In general, over at least the next six months, you will want to look for where you can explore new territory in terms of discovering your own unique brilliance and your ability to contribute to something bigger than yourself, and might also want to remember to temper your excitement for novelty with a dose of sober minded discernment, placing boundaries where they are needed, and endeavoring to use your precious life force energy wisely.

For a final dose of meaning, let us look to the Sabian Symbol for 0° Aquarius, which is “An Old Adobe Mission.” With this symbol Marc Edmund Jones speaks of the continuity that can exist between the core Truth of who we are and how that expresses in what we value in the manifest world. Indeed, our difficult times are asking each of us to center ourselves in the true Essence of our Being, and endeavor to live as an expression of that living wisdom. May we, as exemplars of the whole of humanity, endeavor to offer our lives as an expression of brilliant truth, and sacred freedom.