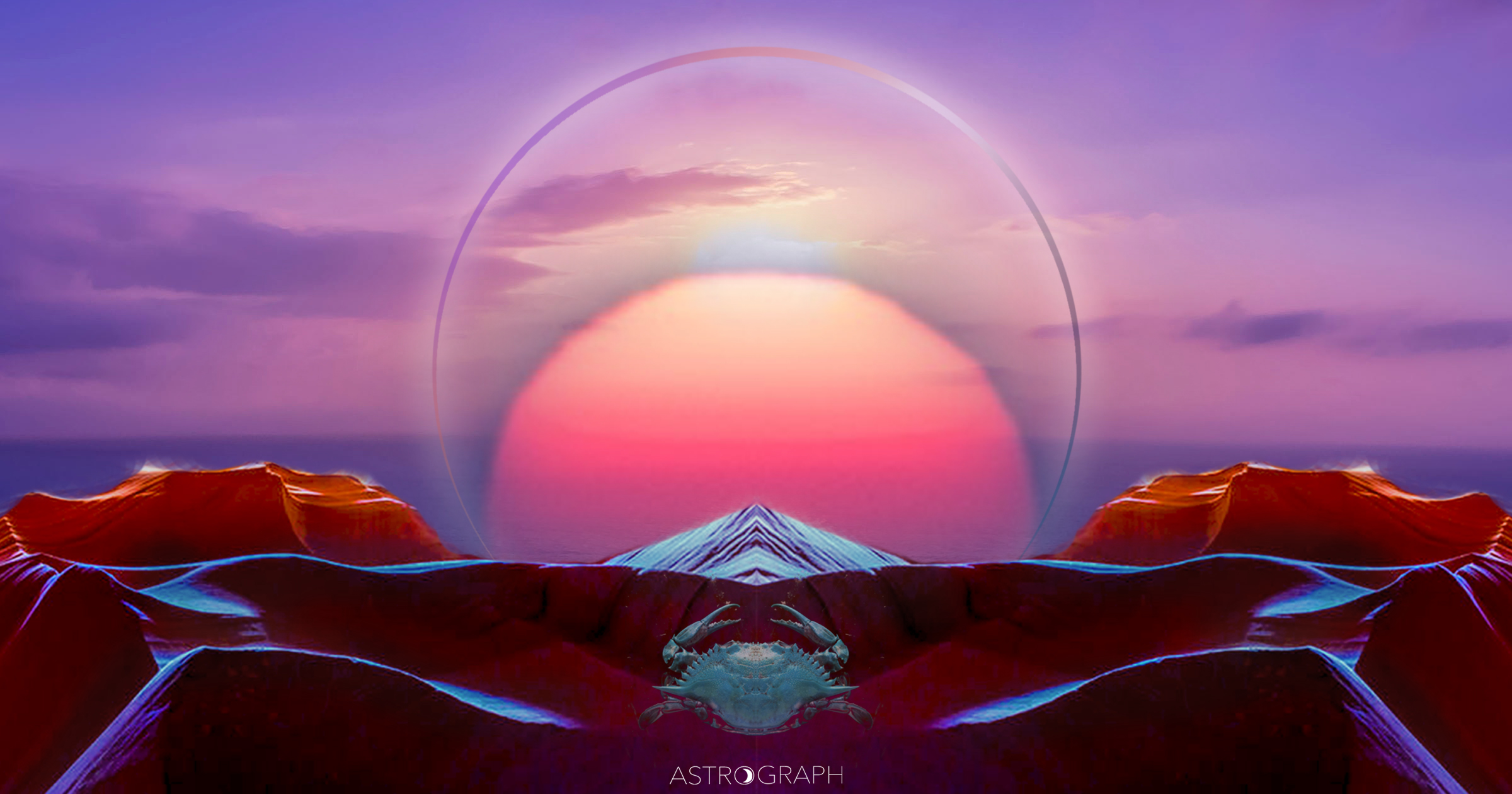 Posted on June 19, 2019 in Announcements |
By Leslie Benson for ASTROGRAPH Horoscopes

This Cancer Solstice, taking place on June 21st, is a potent day, with the astrology suggesting an intense collective metamorphosis around power, evolution, and connection to the divine. The Cancer Solstice is the time each year when the Sun reaches its northern-most point in our sky, which means it’s the longest day of the year and the beginning of Summer for the Northern Hemisphere. It is also the shortest day and the beginning of Winter for the Southern Hemisphere. This is the time every year when the Sun moves into the cardinal water sign of Cancer, and as that happens you may notice a shift in the collective state of being from the fun flexibility and communicative ways of Gemini into a more emotionally attuned and serious tonality. The astrology of this day has special significance, because it’s a heightened time of energetic awareness for our whole planet. It is also important to bring our attention to the cosmic currents right now, as we are as well preparing to enter Eclipse Season, beginning with the Solar Eclipse in Cancer on July 2, spanning to the Lunar Eclipse in Capricorn on July 16. This summer’s season is accompanied by Mercury Retrograde from July 7th to 31st.

As the Sun moves into Cancer we find Mars there, also, making an opposition to Pluto in Capricorn. Mars was conjoined Mercury and opposite Saturn earlier in the week (you can read more about that here in the recent Full Moon Article. This is some very heavy-hitting astrology, and could have stirred up a lot around power struggles, reactivity, and harsh truths. It is also an invitation to step up and into powerful action in a way that is in alignment with what you know is True in your Heart and Spirit. It may also provide opportunities to communicate difficult messages with clarity and integrity.

Interestingly, we find the feminine warrior Eris forming a cardinal T-square to that Mars-Pluto opposition, eliciting an added dimension of standing up for what you truly believe at all costs, and staking a claim for your Soul’s purpose in what you’ve come here to accomplish in this lifetime. There is an air of fierceness, duty, and raw power in these configurations. We may do well to remember to pause, breathe, tune into our present awareness, and mindfully consider how we want to conduct ourselves.

Another prominent configuration of this solstice time is the presence of Neptune in Pisces stationing retrograde, with Jupiter in Sagittarius in square, opposed by Venus in Gemini, making Neptune the focal point of a Mutable T-square. Whenever a planet is stationing to retrograde or direct motion, their influence is heightened. Neptune as an influence can be beautiful in his essence, offering us a reminder of cosmic unity, spiritual compassion, and otherworldly visions of the sublime. He can also cause feelings of anxiety, uncertainty, confusion, and urges to escape into fantasy or by numbing out with addictive tendencies. Neptune in square with Venus and Jupiter, is like your three favorite people have shown up to the party, but they’re all egging you on to go overboard in ways you’ve absolutely told yourself you wouldn’t. This can be joyous, abundant, mystical and indulgent, which is healthy in doses, but has a tendency to tip into territory that’s no longer supportive or helpful. If you notice yourself needing to take a break from the intensity to cope and self soothe, it may be a good idea to create windows of time for yourself to really unplug, wind down and let your system settle and relax. This will allow you to jump back into the game recharged, and avoid fatigue and burnout.

This Neptune, Jupiter, Venus configuration is somewhat antithetical to Cancer-Capricorn configurations mentioned above, so it may help to keep the concept of polarity in your awareness as you move and navigate. You can watch for tendencies in yourself, and in the collective, to vacillate between opposite sides of the same coin. With the Moon in Aquarius on this day, the invitation is to broaden your awareness, and hold all of these polarized and fragmented places in yourself with an expansive and inclusive perspective. In doing so, the reweaving can begin to take shape, through our awareness of these seeming opposites inherently being one and the same.

As our collective human awareness undergoes the tremendous pressure of the evolutionary process, may we endeavor to be both connected to the beauty of the divine, and to the messiness of being human. May we have one hand reaching to the transcendental nature of Spirit, with the other hand sewing the seeds of purposeful impact down in this earthly creation.