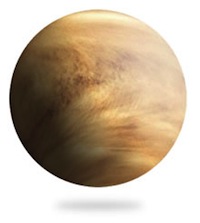 Lovely Venus is the second-closest planet to the Sun, and is the brightest natural object in the night sky, except for the Moon. Venus reaches its maximum brightness shortly before sunrise or shortly after sunset, for which reason it is often called the Morning Star or the Evening Star. She is also sometimes called Earth's "sister planet", for the two are similar in size, gravity, and bulk composition. Her dense atmosphere creates a greenhouse affect, consequently raising temperatures hot enough to melt lead! At one time Venus had voluptuous amounts of water on her surface, but that has long since boiled away, and has been replaced with steamy hot lava flows and gently rolling plains. Venus is the only planet in the Solar System named after a female figure, since Ceres and Eris are dwarf planets.

Venus, or the Greek Aphrodite, is the Goddess of love, beauty, and relationship. The planet probably gets her name because she is so very bright and beautiful! Venus is in-taking, rather than out-going (as represented by Mars), and rules the signs Libra and Taurus. Venus has its exaltation in Pisces, and is associated with aesthetics, beauty, refinement and romance. Its position in the chart indicates the area in which the give and take of love, affection, and sensual pleasure will be expressed. The position of Venus also shows a person's perception of relationship and affection. Or, the qualities and expressions of affection that someone may be most receptive to, or comfortable with. A person with Venus in Leo may have a much different perception of love and romance than a person with Venus in Cancer! Wherever she lies in your chart, or that chart of your lovers and friends, she is sure to play a big role in your romantic endeavors, quest for beauty, and potential for love!