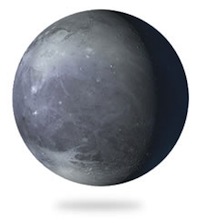 Pluto has recently been termed a dwarf planet by a convening of the International Astronomical Union in Prague. Of course, this does not diminish its importance for astrologers. Since there is a well-established body of research on the very distinctive effects of Pluto in natal charts, by transit, and in combination with other transiting outer planets, we will go on just as always. It does mean that newly designated dwarf planets such as Eris and Ceres will be given a seat at the table, and are likely to become better understood as astrological symbols before much more time has passed.

Pluto was discovered in 1930 as a result of an extensive search by astronomer Clyde Tombaugh. Some astronomers have long argued that Pluto's small size, less than one-fifth the diameter of Earth, and a weird tilted orbit that takes it inside Neptune every couple hundred years, make Pluto more like a Kuiper Belt body than a full-fledged planet. On August 24, 2006, the International Astronomical Union passed a new definition of planet that excludes Pluto and puts it in a new category of dwarf planet. From an astrological perspective, however, little Pluto is just as strong as ever! The famed God of the Underworld (in Greek mythology the corresponding God is Hades), Pluto is a force for change that can be destructive in its power. Pluto rules Scorpio, and is exalted in Leo. Pluto is related to will, and intense passion, and has a reputation for ruthlessness. As God of the Underworld, Pluto can help to bring our deepest and most buried compulsions into the light. Its position indicates areas of life that must ultimately become transformed as part of the soul's evolution.

On the lighter side, Pluto is associated with renewal and rebirth. It represents endings and new beginnings, as well as spiritual growth and rebirth. Negative expression of Pluto is an obsessive desire for power and control and general destructiveness. A positive expression is the ability and desire to transform. In a chart, the position of Pluto by sign will be shared with other people in the same generation due to the comparatively slow movement of Pluto, the outermost planet, in the heavens. By house, the position of Pluto shows where individuals search for truths and deeper meaning. This area of life may be associated with change, upheaval, power struggles, and issues of control. Pluto in aspect to other planets in the chart colors those energies with obsessive qualities, power struggles, the need to find deeper meanings, and willingness to explore and examine. Where we find Pluto in the chart is where we either seek change and transformation, or have it thrust upon us if we refuse to accept our deepest needs. If we fear Pluto's energy, or our "dark" side, destructiveness (both directed at ourselves or others) can be a byproduct.