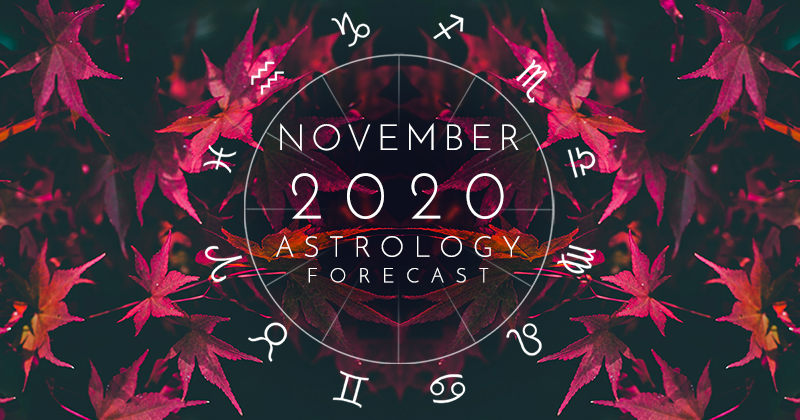 Posted on October 30, 2020 in Overviews |
By Henry Seltzer for ASTROGRAPH Horoscopes

The first half of the month of November, stemming as it does from the recent mid-October Libra New Moon, is sure to be in many ways quite stormy, speaking of the psychological rather than the physical weather. That is because the Saturn-Pluto conjunction, the astrological signature of this intense year of breaking norms, is drawing closer, and is directly activated by that New Moon degree of 23 + Libra, very nearly perfectly in square with the Saturn/Pluto midpoint, while Eris, at 24 Aries, makes an even closer square to this fatefully symbolic combination of archetypal energies that can be read as massive structural transformation on both individual and collective levels.

To add to the outer planet influences on this particularly climactic month, the most potent of this dynamic year of change, the October 31st Taurus Full Moon, at 8 + degrees of the sign, was in partile conjunction with Uranus, tremendously highlighting as well this trickster archetype of rebellion, symbolically thumbing its nose to normative social order. This is quite a stew, coupled with optimistic and expansive Jupiter moving ever closer to the position of Pluto, exact by November 12th, to be then followed by the potent Scorpio New Moon of late evening November 14th, which again adds further emphasis to the ongoing cultural metamorphosis of these climactic times.

November 15th was, in fact, the date singled out several years ago when I participated in a “2020 summit” that was convened by Shamanic Astrology Mystery School astrologer Daniel Giamario and intended to address the societal changes that we saw coming. The triple conjunction of Jupiter, Saturn, and Pluto in late 2020, around mid-November more specifically, was a particular focus against the backdrop of Saturn-Pluto for this entire year of 2020, and beyond. Dramatic structural changes are indeed going down, and it does seem as though the divisions in American society, and also, to a lesser extent, worldwide, are getting sharper. We also find voices calling for unity. Whatever form the peak of these disturbances may take, we will emerge from this 2020 caldron a vastly different society than when we entered it.

Another factor in these November skies is Uranus, the cosmic trickster. This is not so much true after mid-month, but preceding that, in the first half of November, it is very true, because of that Taurus Full Moon of October 31st being exactly conjunct Uranus. We can therefore expect surprises, and surprising revelations, all through these first two weeks of November, including the ten days following the American Presidential election.

Eris is also a significant part of the astrological patterning of this climactic 2020 year, representing a spiritual Warrior energy, in support of deep soul intention, and reflecting the necessity for each and every individual to take a principled stand for whatever it is that they most sincerely espouse. For many, this will include the democratic value of one person, one vote, and that majority rule will determine the outcome of free and fair elections in a just society. Whatever your politics, you are encouraged at this time to articulate your position and to be prepared to act upon it.

This planetary archetype of Eris is relatively new to Western Astrological interpretations, but has been amply proving its effectiveness when we examine natal and transiting charts. Two other newly officially named bodies, out there in the far reaches of the Kuiper Belt along with Pluto, and Eris, also turn out to be loaded with significant meaning for these difficult times that we are living through. These are Haumea and Makemake, which I have discussed more extensively elsewhere, such as in my TMA article from April of this year. They represent, in different ways, “profound connection to Nature,” and to Natural Law, and it must be admitted that we have need of their archetypal energies in these times of Earth assault by the forces of infinitely expanding profit, no matter what the cost in terms of human and environmental value. As is very nearly universally recognized, the promoters of pollution, including greenhouse gasses, must be reigned in over the next decade or we all will face disastrous consequences.

It is therefore quite interesting to note that in the mid-November Scorpio New Moon, we find the highlighted presence of both Haumea and Makemake. Haumea is exactly square to Saturn, in the same degree of their respective signs of Libra and Capricorn, while Makemake, in Libra as well, is precisely quincunx to Uranus in Taurus. This indicates, I believe, that the important Earth issues that these two new planetary archetypes in large part represent will be huge factors in the weeks following the American Presidential election.

In closing, what do we, as individuals attempting to find our footing, need to know, and to do now? How are we to proceed, and what are we to make of these massive astrological influences coming down upon us, and upon all of humanity, in these powerful closing months of this climactic 2020 year? The answer to this question lies inside us. We can be guided by the astrological indications, but most importantly by the depths of our own intuition, as we face the powerful political currents of our times. We must remain fearless, and strike a blow for what we feel is right, deep down, not letting ourselves be dissuaded by any form of propagandistic posturing or denial of our birthright as human beings, and as citizens of an emerging more equality-focused social order.