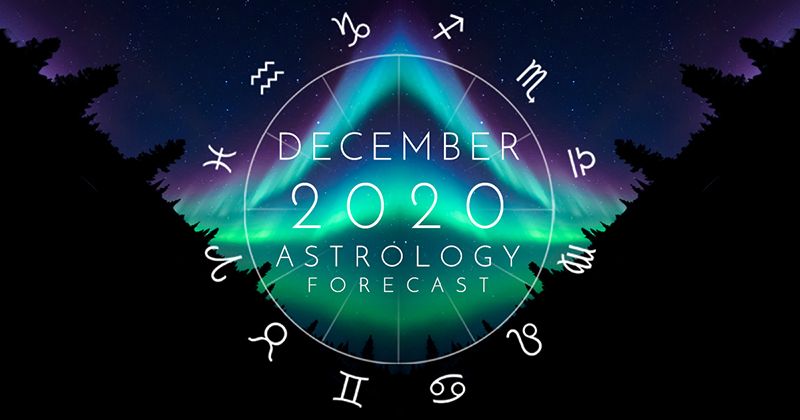 A December Month of Trial and Potential Triumph

Posted on November 30, 2020 in Overviews |
By Henry Seltzer for ASTROGRAPH Horoscopes

This is another wild and crazy month that we have coming up, an extension of the past few, and for those previous similar configurations we have seen plenty of evidence in the headlines. If we decide that we can link the ongoing collision of Saturn-Pluto with one outcome in terms of the Covid pandemic – and I have found that association accurate – then we are in for more of the same, at least through December, although the 21st providesa different configuration possibly presaging a change in the psychic weather. The significant astrological configurations preceeding that Winter Solstice timing are of an extra-potent nature, being eclipses, one the day before December begins, a Lunar Eclipse focused on the Moon and her sign that she occupies of Gemini, and the other a Solar Eclipse and New Moon in Sagittatius that takes place on the 14th, with emphasis once again on both Saturn and on Pluto.

To take these in the order that they come up, we have the Lunar Eclipse of the morning of November 30th, the day before December 1st, therefore coloring these first two weeks of December, and in fact with the potential to have a more persistent influence, because in the popular way that astrologers look at these events, eclipses last six months. The Sun and Moon in the ninth degree of Sagittarius and of Gemini, or 8 + degrees of these signs, make aspects to Uranus at nearly the same degree of Taurus. Surprises abound, and startling revelations as well, and this is a continuation of the previous month when Uranus was also highlighted. We are already seeing some confounding events as the month gets underway. The trial of these times are not simply disasters though, but give us the opportunity to meet aparent adversity with increased determination, and with character. We might be able, with courage and faith in ourselves, to make of the lemons the lemonade of rising above.

Neptune, too, is quite potent in these December skies, having stationed to direct motion in the lunar eclipse timing. This gives the potential for misunderstandings and deliberate attempts at deception, both in our individual lives, and in the collective. Discernment is called for, and we must summon up our best selves as we try to rise above any pettiness we might encounter in our immediate vicinity.

With the December 14th Solar Eclipse, taking place at precisely 23 + degrees of Sagittarius, we cannot help noticing that the eclipse degree, powerful by means of that alone, is also in same-degree aspect to the degree of Eris in Aries, and as well the degree of Pluto in Capricorn. Meanwhile, another new planet, Haumea, representing principled adherence to Nature, and to natural law, in Libra but no longer precisely opposite Eris, having moved on a bit, nevertheless remains in close square to Saturn. Therefore both Pluto and Saturn are here emphasized, as Saturn prepares to leave Capricorn a few days later. The presence of these two potent planetary archetypes brings forward the idea that it is indeed up to each of us to make the future happen, again on both individual and collective levels. You must somehow rise above, and take this opportunity to look deeply into your soul for your bottom-line values and act strictly from these principles; that is the message of prominent Eris. And also, based on priminent Haumea, you must do what you do based on principles of right relationship, and right action, following your membership in what you can conceive as a moral universe, that you find yourself able to adhere to.

Perhaps the most interesting of the quite significant astrological moments that are coming up for us in December arises a week later, on the 21st, with the advent of the Winter Solstice, when also Jupiter and Saturn meet up in the first degree of Aquarius, a twenty year event that is also taking place this year in the Air sign of Aquarius. This is a remarkable configuration which is also a First Quarter Moon. In the afternoon of that Monday, the Sun is at 0 Capricorn, and the Moon at 0 Aries, in square, make precise angles to Jupiter-Saturn at 0:30 of Aquarius. The Winter Solstice is in any case an important chart to cast for the upcoming year, critically enhanced by the so-called Great Conjunction of Jupiter and Saturn, initiating their new journey of subsequent conjunctions in the Air element for the next approximately 200 years.

I take this as a hopeful sign that the global culture wherein we all live, and in which we find our social being, is about to turn an important corner. It might be that the concept of getting along and respecting, even treasuring each other, in all our inherent diversity, might be striving to make more than a token appearance. If it does, and if earth issues such as climate change can begin in the process to be addressed at last, it will take the concerted efforts of each and every one of us, acting from deep principle for the benefit of all.