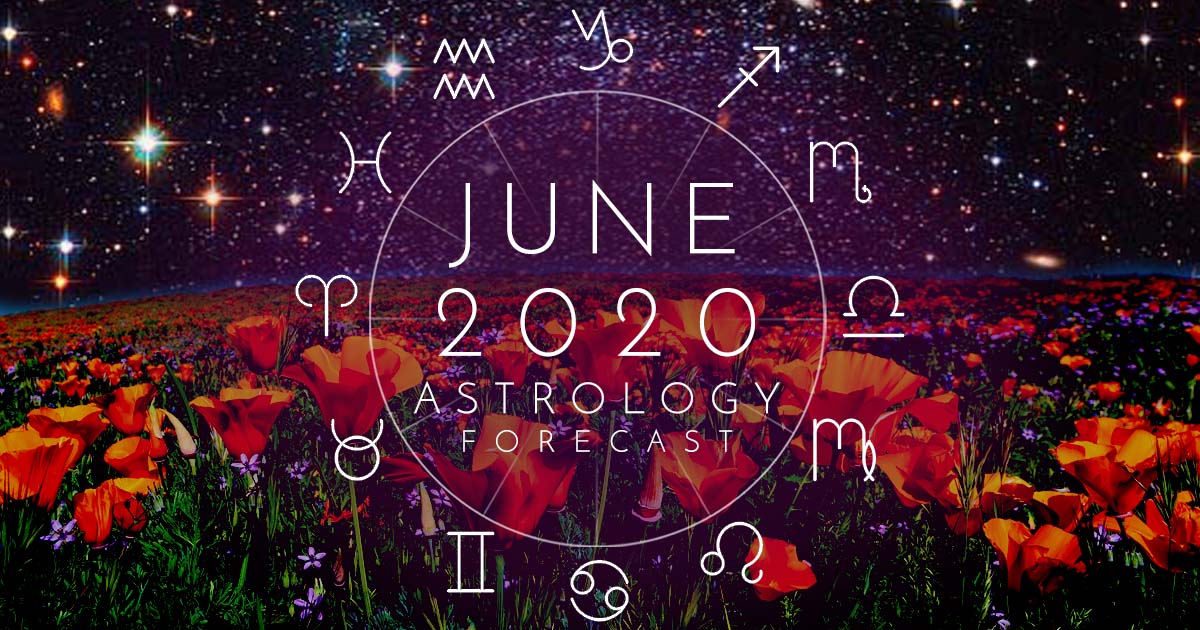 Posted on May 31, 2020 in Overviews |
By Henry Seltzer for ASTROGRAPH Horoscopes

The month of June comes riding in on butterfly wings, and it exits at a far slower and more thoughtful pace. Transformation is still the lead headliner, with an ongoing T-square from new planets to Jupiter-Pluto in Capricorn. The square between Eris, Feminine Warrior for soul intention, at 24 + degrees of Aries, and Pluto at 24 + of Capricorn, remains partile or same-degree right through to the end of the month. Opposite Eris, Haumea, representing Nature as spiritual path, is at 26 + of Libra when June begins, and moving retrograde, becomes a degree closer by month’s end. These three in this dynamic and long term configuration are quite slow-moving planets, being located out beyond Neptune in the Kuiper belt, so that this rather intense patterning, denoting massive societal transformation and breakdown, with spiritual overtones, lasts several months in all. It is bolstered this month by the conjunction with Jupiter, which swings into partile alignment as well by month’s end. After mid-July, this intensity eases off, but in the May and June timeframe it has extreme amplitude, and might be considered to indicate that the Covid nightmare is still very much with us during this extended period. Also strong amongst this month’s outer planet influences are Neptune and Saturn, both featured in the timing of the May 22nd Gemini New Moon, and the configurations of June. Neptune brings a spiritual attunement to the party, compassionate yet also scattered, while Saturn, located in the early degrees of Aquarius, brings a practical-minded, somewhat cynical, and more fully grounded presence as he scuttles backward to rejoin Jupiter and Pluto in Capricorn by the very end of the month. These two important planetary archetypes are of course somewhat antithetical in their effects. The presence of numinous Neptune makes for an idealistic and deceptive or illusory take on things, while Saturn cries out for discernment, and for getting to the bare-naked facts of the matter. We are seeing this dynamic play out at this time in our politics and in the tortured decision process and debate over what communities are supposed to do, exactly, as the economy reopens. We see this also in our own individual lives, as we attempt to cope with the increasing confusion and the need for discernment inherent in our situation.

Neptune, numinous and otherworldly energy that seems by turns vague or confusing, and then again spiritually astute, was powerfully featured in the May 22nd Gemini New Moon that kicked off the June cycle, because aspected by Sun, Moon, Mercury, and a retrograding Venus. Saturn at that time was equally emphasized because Sun and Moon, at 2 + Gemini, made an almost perfect trine to Saturn at the 1-degree mark of Aquarius, and slipping backward. Together, they add to the chaos and uncertainty of our situation, as outlined in the preceding paragraph, and as well a sense of limitation implied by Saturn, as we continue to battle the invisible enemy of the coronavirus. Saturn is also featured in the upcoming solar eclipse New Moon, which is also the Summer Solstice, marking summer at least here in the northern hemisphere, and located at 0 Cancer, in partile or same-degree inconjunct with Saturn, at 0 Aquarius and about to transition backward into the last degree of Capricorn on the first of July.

The lunations of June are all in fact quite interesting, beginning with the June 5th lunar eclipse taking place in Sagittarius, and making a perfect T-square to Mars in Neptune’s sign of Pisces. This is a potent lunation, featuring, once again, numinous Neptune, and with implications for the next six months. After that, we find the Last Quarter Moon, taking place the late evening of June 12th in the sign of Pisces, closely conjunct both Mars and Neptune, again emphasizing this archetype of oceanic oneness with all creation. Doing, as represented by Mars, becomes fantasy-driven or proceeds with motives unclear. Spirituality soars; confusion reigns.

Finally, the power of the June 20th solstice eclipse New Moon is also likely to turn our heads, with the Sun and Moon lying in potent partile inconjunct to Saturn, and septile to Uranus. This configuration could bring up dark surprises, and again lasts six months, until the December winter solstice, when Saturn and Jupiter conjoin in this same degree of 0 Aquarius, and when therefore an important new societal phase begins to come in. This eclipse packs a one-two punch! A week later, in the timing of the Moon’s June 28th First Quarter, Mars enters Aries and in doing so, squares the eclipse degree. The T-square to Pluto mentioned at the top of this article is closer than ever, with Jupiter in partile conjunction to Pluto in Capricorn. Thus, to at least the middle of July, we are in for an intensely transformational time, and also for something of a rough ride with this uncontrolled virus.

The Astrology of September 2020 The Sun is in Libra