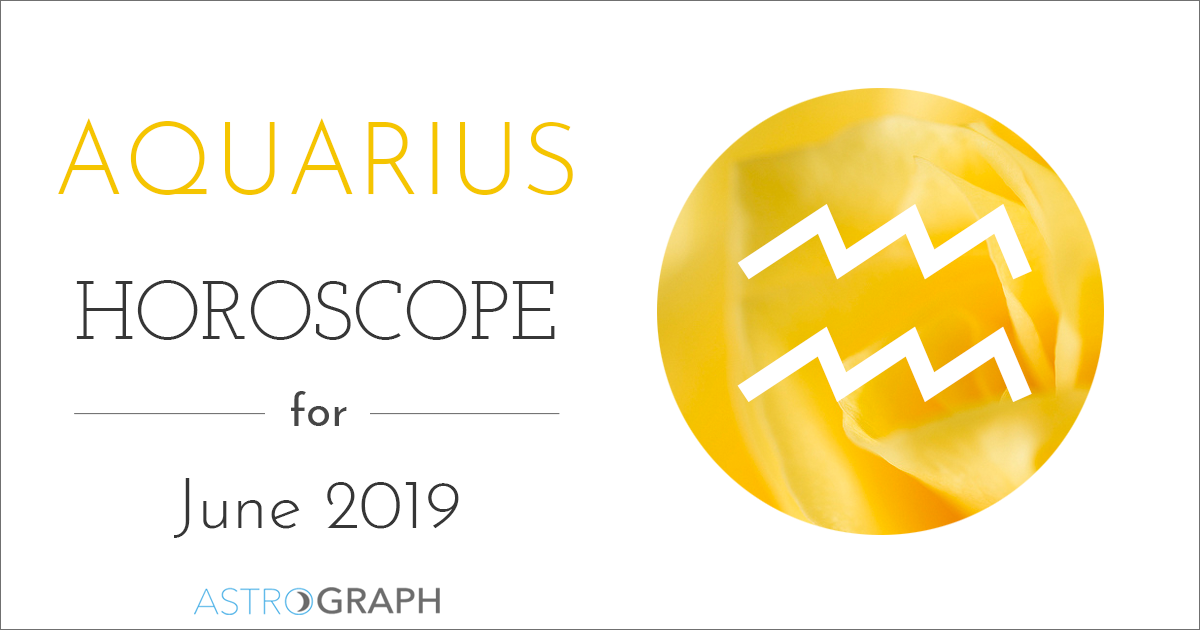 Posted on May 31, 2019 in Aquarius |
By Henry Seltzer and Adam Elenbaas for ASTROGRAPH Horoscopes

This month continues the drumbeat of change that has been accumulating all year, Aquarius, even though coming up in subtle ways, as though from below the level of conscious awareness. Your intuition is strong, and your insides are whispering an urgent message that sounds increasingly like an urgent summons. This month, self-expression is a major theme, vital to your future happiness. You are being asked to fashion a work of art out of your activities, if you will allow that process to take place. New roads to creativity are opening up for you, and your well-known proclivity of novelty and departure from well worn ruts is therefore being put to the test, of whether to innovate with the onrushing stream or to languish in the back waters of conformity. All this comes to a head with the Sagittarius Full Moon of the 17th. You are fundamentally optimistic about your prospects, so that all you need to do is place your faith in the untried ideal that calls to you.

This month features two big astrological events. The first is the opposition of Mars in Cancer to Saturn and Pluto in Capricorn. This transit is happening across your sixth and twelfth house axis, the houses of work, sickness and service (sixth house), and dissolution, surrender, and self-undoing (twelfth house). The second astrological transit involves a series of T-squares being activated between planets traveling through Gemini in your fifth house of good fortune, creativity, and children, Jupiter in Sagittarius in your eleventh house of friends, allies, and groups, to Neptune in Pisces in your second house of income and expenditures.

Arguably the biggest transit for everyone this month is the opposition of Mars to Saturn and Pluto. This transit is happening between June 13th to June 21st, from your sixth house to your twelfth, and therefore it’s taking place between two houses that were traditionally associated with sickness, impermanence, loss, hard labor, and even slavery. However, it is also quite common to find those who work in the helping professions or healing arts with a lineup of planets in the sixth and twelfth houses, what to speak of some of the deeper spiritual lessons that are regularly gained whenever one has a twelfth house transit. All of this being said, the intense, moody, and confrontational energy of Mars in Cancer in your sixth house this month might have you feeling tired, irritable or generally drained. The oppositions to Saturn and Pluto in the twelfth house may also imply that you are doing a deeper level of shadow work this month, and with your ruling planet Saturn now retrograde in the twelfth house its possible that some of what you are encountering is a replay of past troubles or difficulties that are resurfacing to test how far you’ve come.

The best side of this transit may be the call to serve, to fight or advocate for those who are sicky or needy, or to work through your own limitations by drawing on a deeper reservoir of emotional inspiration, hard work, and vulnerability or honesty. The good news is that with the life-giving Sun moving into watery Cancer just after Mars finishes its oppositions, you will likely feel a wave of relief, understanding, and clarity very quickly after this wave of martial intensity has passed.

The other major transit of the month involves the ongoing T-square made from planets in Gemini and Jupiter in Sagittarius to Neptune in Pisces, representing your second house of finances. The T-square is first stimulated by the New Moon in Gemini on June 3rd, and then it is activated more intensely by the Sun between June 9th and 10th, and then again by the Full Moon in Sagittarius on June 17th, and then finally one last time by Venus in Gemini between June 22nd and 24th.

The entire series of T-squares happens between three houses that all pertain to different kinds of resources. The eleventh house is where we find the resources of friends, groups, and professional or ideological allies. The fifth house is where we find creative support, familial support, good luck, or joy. And the second house is where we find income and expenditures, as well as other material assets and possessions in general. The general mood of these transits is very Jupiterian, considering that Jupiter is in its home sign and the host of Neptune in Pisces. This may very well translate into substantive gains this month on a variety of levels. You may be meeting new allies or joining new groups, most likely these associations will be immediately beneficial. Or you might be finding new streams of revenue or financial support, or even just finding new ways to enjoy yourself or have fun.

On the other hand, it’s important to be extra thoughtful and discerning when evaluating who or what you are seeking help from, what you’re investing in or spending your money on, or where you finding joy and pleasure. While the Neptune/Jupiter connection has an uplifting and expansive aura around it, this combination is also related to deception and grandiosity. For example, Jupiter and Neptune is sometimes associated with steroid use in athletes, which represents an unhealthy and even illegal method of gaining weight or extra strength or speed. So be careful that you aren’t tempted into doing something that is too big or too selfish.

Finally, on June 26th and 27th, the Sun in Cancer in your sixth house of work, sickness, and service, will square Chiron, the wounded healer and sage, in Aries in your third house of the mind and communication. This brings up interior wounding, and yet the month could end on a positive note, with an opportunity for healing words and actions, and with the added grace of mental and emotional clarity. If you do your inner work this month, the most likely outcome is that you will have grown more emotionally mature while also developing new assets, intelligence, and allies in the process.

The Astrology of April 2020 The Sun is in Aries