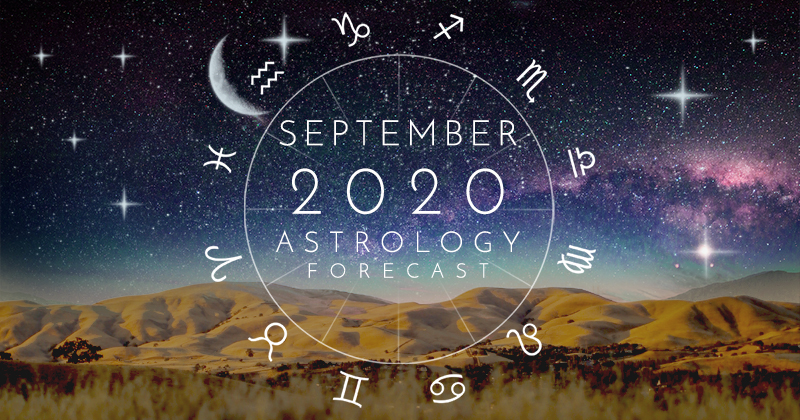 A September Month of Limitation and Opportunity

Posted on August 30, 2020 in Overviews |
By Henry Seltzer for ASTROGRAPH Horoscopes

September is an interesting transitional month between the trials of this past summer and the further trials of a volatile fall season. There continues to be a strong emphasis on Saturn, indicating contraction, limitation, slow-downs, and dedication to purpose. There is also a contrasting degree of openness from the presence of the revolutionary trickster energy of Uranus, in the lunations of the current month. Where Saturn says “I cannot” Uranus says “why not?” and “Yes, I can.” Saturn acts as an inhibitor to moving too far, too fast, while Uranus gives encouragement to this very vision. It’s actually sort of like the two political parties squaring off in the US at this time.

On the basis of personal development, we are caught in the middle, with a nay-saying angel on one shoulder insisting on a thoughtful exercise of reasonable caution before jumping off the deep end, while on the other shoulder sits the Fool card in the Tarot, carelessly stepping off the cliff, confident in the regenerative powers of the universe to support and to save him. In truth it will take a combination of these influences to see us through the growing crises of our civilization in the midst of a health, an economic, and a political disaster.

The evidence for these varying astrological archetypes simultaneously taking center stage can be seen in the recent Leo New Moon, when Sun and Moon directly aspected Saturn in the same degree as the Leo positions of Sun and Moon, namely 26 + degrees of Capricorn. Saturn is also still at the apex of a T-square from Eris/Mars opposite Haumea, as I have described earlier. Saturn and Pluto in combination continues to be the hallmark of this new decade, lasting until 2022 according to the 15-degree orb recommended by Rick Tarnas in his seminal Cosmos and Psyche. Saturn is also emphasized in the September 1st Full Moon that begins the month, being in partile opposition to Venus in Cancer, therefore participating in a grand cross involving Eris, Mars, Venus, and Haumea. Then, the Virgo New Moon of September 17th also aspects Saturn, with the Sun and Moon in partile trine.

As far as Uranus, also highlighted this month, we have the partile aspect from Venus in the timing of the Leo New Moon, the Sun and Moon in partile trine and sextile to Uranus during the September 1st Full Moon event, and Sun and Moon making an exact sesquiquadrate aspect to Uranus in the Virgo New Moon of September 17th. Uranus has also been also septile Neptune through to the end of October. This archetype of surprise events and unexpected enlightenment is therefore very much with us, as well, in this September timing, and on to the end of the following month, when the Full Moon event of October 31 will exactly conjunct and oppose Uranus in Taurus.

All this Uranian activity over the next sixty days is taking place in the context of Eris, Feminine Warrior for soul intention, being in almost perfect square to both Saturn and Pluto, as they return by month’s end to direct motion in the sky, remaining within a few degrees of each other. This implies that your mandate from the universe at this time is to get very clear on what exactly your innermost principles demand of you, from deep inside, and then to proceed to act upon these dictates from the standpoint of your most authentic self. In this you will be guided by intuition, another keyword for Uranus, and also by your own rational judgment, as symbolized by strong Saturn. Steering between these principles will be your difficult task, and your sacred duty, as you continue to evolve.