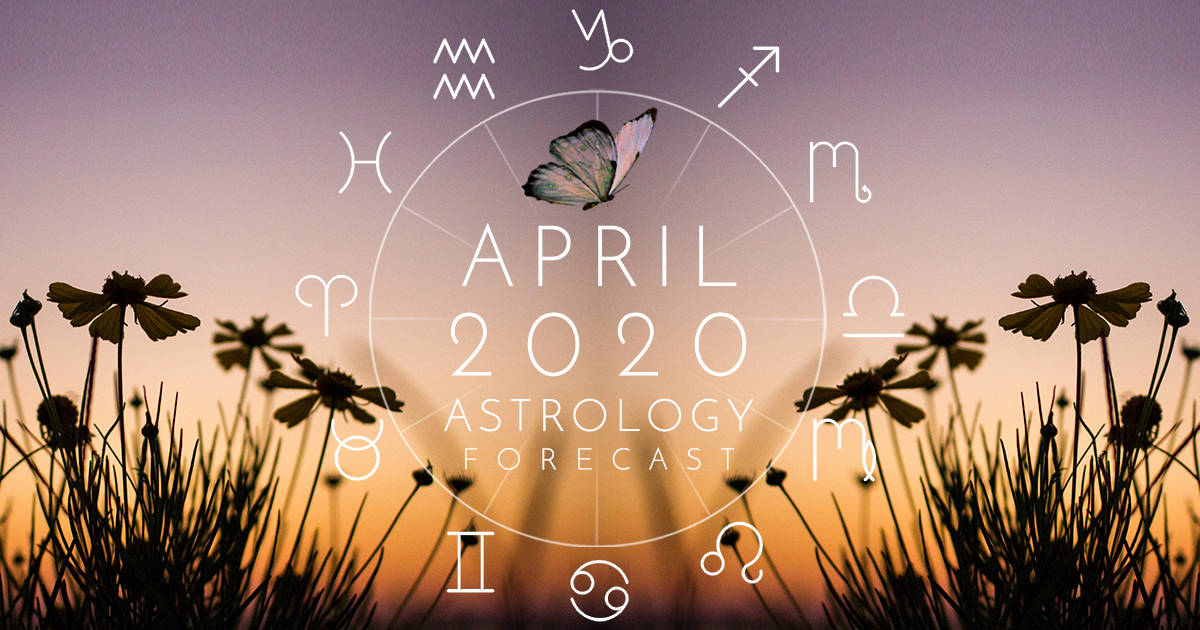 An April Month of Transformation, Angst, and Earth Issues

Posted on March 31, 2020 in Overviews |
By Henry Seltzer for ASTROGRAPH Horoscopes

The Astrology of April is complicated by the presence of many outer planet combinations, together with alignments between these and personal planets, including Mercury, Venus, and Mars. In the Aries New Moon that initiated the current monthly cycle, for example, Sun and Moon conjuncted Chiron, the Wounded Healer, and made a near perfect semi-sextile to trickster Uranus, while Jupiter and Pluto in conjunction in Capricorn also conjoined Mars, a hugely energetic signature that presages severe transformational energy moving us all along on our individual evolutionary spirals; at a more ordinary level, this combination can indicate contention and the potential for suppressed anger to explode into rash words or deeds. As the month begins, Mars enters Aquarius and conjuncts Saturn, while Mercury conjoins Neptune. These aspects tend to bring limitations to bear, along with the Neptunian issues of truth versus falsehood, and reality contrasted by illusion or self-deception. In the potent Libra Full Moon of Tuesday, April 7th, Mars conjuncts Saturn, squares Uranus and trines Venus, with Venus participating in a grand trine in Air with Mars-Saturn and the new KBO planet of Makemake, at 5 degrees of Libra. Makemake has been shown to represent, on one level, earth activism, so that this second week of April is therefore quite intense, with impulsive actions, stuck situations, and the additional possibility of environmental actions coming to the surface, in preparation for Earth Day two weeks later on. The presence of Chiron in several of these configurations is quite striking, and indeed it is an unusually angsty time here on planet Earth. The fear of the unknown is very much with us, and yet also the courage to be ourselves, and to rise to the occasion, in spite of all that fear. Social scientist Brené Brown speaks of feelings of vulnerability as being the necessary pre-condition to courage. We all seem to have that challenge before us now, as we attempt to marshal our forces to defend against an invisible enemy that is stalking our cities and our way of life.

In regard also to enforced isolating, relationship with others is also a big theme in this Aries month of April, especially in the timing of the April 7th Full Moon in Libra. In this configuration, Venus, which rules relationship in general and the sign of Libra in particular, is highly activated as described above, putting a thoughtful and spiritually activist spin on alliances and partnerships. As we all are coming out of a rather intense passage of Mercury through Pisces, over these past six weeks before April began, we are in a thoughtful mode, examining our possibilities, including those of being in connection with our fellow human travellers in this strange new social setting.

Another thing that is important to note in this month’s astrological currents is the powerful presence of Chiron, the Wounded Healer. Chiron was actually conjuncted by the Aries New Moon of March 24th that kicked off this current lunation cycle for the first three weeks of April. And, in addition to that strong Chiron symbolism, Mercury conjuncts Chiron precisely in the timing of the Last Quarter Moon of Tuesday, April 14th, when also the Moon in late Capricorn is found closely conjoined to both Jupiter and Pluto, highlighting their one-degree conjunction, placed directly between them! This speaks to the intensely transformational energies of this month, when both Pluto and Uranus are emphasized, reminding us of the counter-cultural idealism of the volatile sixties. With Chiron highlighted, let us use the time we have now for self-exploration and better internal integration, remembering that our inner wounding is only a mirage of poorly digested pain that can be relieved by a powerful interior meditative monologue addressing the hurt spaces within us, and the lost and walled-off child self yearning for positive adult connection.

The Aries cycle ends with the Taurus New Moon of Wednesday, April 22nd, which is also Earth Day. This New Moon is conjunct surprising and unexpected Uranus, suggesting new ways forward, and – in this Earth sign – an attempt to revitalize our bodily energies, and indeed the energies of planet Earth herself. Coincidentally, I have been researching the other two officially named new “dwarf” planets beyond Pluto, Haumea and Makemake, whose emerging archetypes represent different aspects of profound connection to Nature. This is better documented in my recent article, “New Archetypes in Western Astrology,” appearing in the April issue of The Mountain Astrologer magazine, currently available on local newsstands. Haumea is a charismatic and protean shape-shifter that reflects this strong Nature identification, while Makemake appears to be the more activist, witness the partile aspect between Makemake and Eris in the chart of Greta Thunberg, among many other examples. In a somewhat amazing synchronicity for this moment in time, a New Moon on Earth Day, we find the midpoint of these two Nature-oriented planets, at 16 plus of Libra, in another extremely tight grand trine in Air, with Venus and Mars.


In these times of trial, Earth issues are certainly up for us all. It is moreover possible that in the reliance on Science that is our current watchword, as we develop solutions to the global pandemic that threatens our lives and our civilization, a further reliance on science might come into being in beginning to seriously contend with that other invisible scourge of human life on earth that is represented by Climate Change.