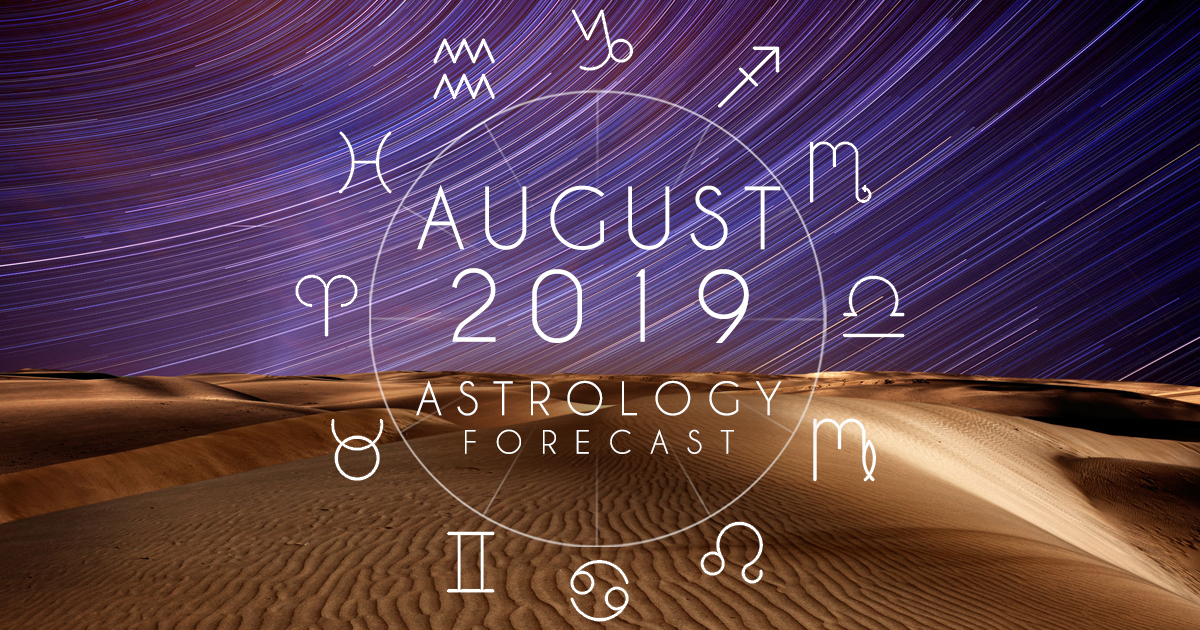 An August Month of Departure and Breakthrough

Posted on July 31, 2019 in Overviews |
By Henry Seltzer for ASTROGRAPH Horoscopes

The Astrology of August begins on the evening of July 31st (or late evening, or early morning next day, depending on location) with a Leo New Moon featuring Sun, Moon, and Venus in square alignment with trickster Uranus. In this same timing, also, Mercury stations to direct motion in close square with Eris, a spiritual warrior archetype in support of profound values and studied intention. Together, these astrological currents presage an unusual month of departures from pre-existing norms and attempts to find entirely novel ways of being in the world in greater integrity, and in support of deep soul purpose. Because the transformational energies of Pluto are also empowered, and are linked with Jupiter and Saturn in this configuration that lasts for the entire thirty-day stretch of this August cycle, this will be also a month of difficult change. We must be aware that our evolutionary development is on the line, as an important backdrop to the significant potential for an unusual, even startling, jumping of the tracks of our existing habit patterns. In one way, the sky is the limit, and freedom from the past is your watchword, while in another we also have the practicalities of our situation to consider – as represented by the conservative energy of the Saturn archetype – making for a push-pull that requires discretion and relying on inner guidance to see us through.

We are also subject to the residue of a strong Mercury Retrograde period for the first two weeks of August. This is the retrograde “shadow period” when Mercury is regaining the fifth degree of the sign of Leo, where it stationed to backward motion last month. The actual station direct, taking place in the late evening of July 31st on the U.S. west coast, early morning for points east, is a rather strange time, just as the month of August gets underway, of looking back at our history and ahead to the possibility of going beyond its limitations. We are buoyed up by the possibilities and yet potentially also fraught with anxiety over the difficulties of transcending previous habit patterns. It might help us at this time to remember that, as Faulkner once said, “The past is never dead; it is not even the past.”


As the month begins, an unusual configuration of parallels links Jupiter, Saturn, and Pluto, indicators of massive societal transformation. Saturn and Pluto are in close parallel, at virtually the same declination, only 4 minutes of a degree separating them. This implies an empowering of each of these archetypes, of contraction and of transformation. The factor of Jupiter being in extremely close contra-parallel to these is also significant, indicating that there is a societal change in the works for this current monthly cycle, with ramifications for individual evolutionary development. This month thus previews the even more massive changes that we will face next year, when Saturn and Pluto come together for a two-part collision. The first phase, occurring at the very beginning of January, will be the primary hit of the Saturn-Pluto conjunction that takes place every 35 or so years, while the second phase, in mid-November, involves a triple conjunction with Jupiter in the mix. At this juncture we must recognize the strong potential for massive structural realignment of the society as a whole. Of course, this year and next will be also be individually transformative. We all have to be prepared to give something up, in order to enable ourselves to make necessary changes that are called for in the very structure of our lives. The social situation affects each one of us personally. As well, in reality, the collective is comprised of individuals, so that changes that we each make are reflected in the society as a whole.

Additionally, and on a simpler level, there is Venus to consider. There is a long conjunction between the Sun and Venus that takes place during August between the quarter moon configurations of the 7th and the 23rd, punctuated by the Aquarius Full Moon of August 15th. At this dynamic Full Moon, Venus and the Sun are in partile or same-degree conjunction at 22-degree mark of Leo, in aspect to Pluto in Capricorn, and the new planet, Eris, in Aries. The planet of love being so fully highlighted implies that, as we go through the important changes of this month, relationship transformation will be prominent, signaling that in profound as well as more surface ways, we fundamentally need each other. Love blossoms, and it is ideally a love that includes our most authentic version of ourselves into the bargain.