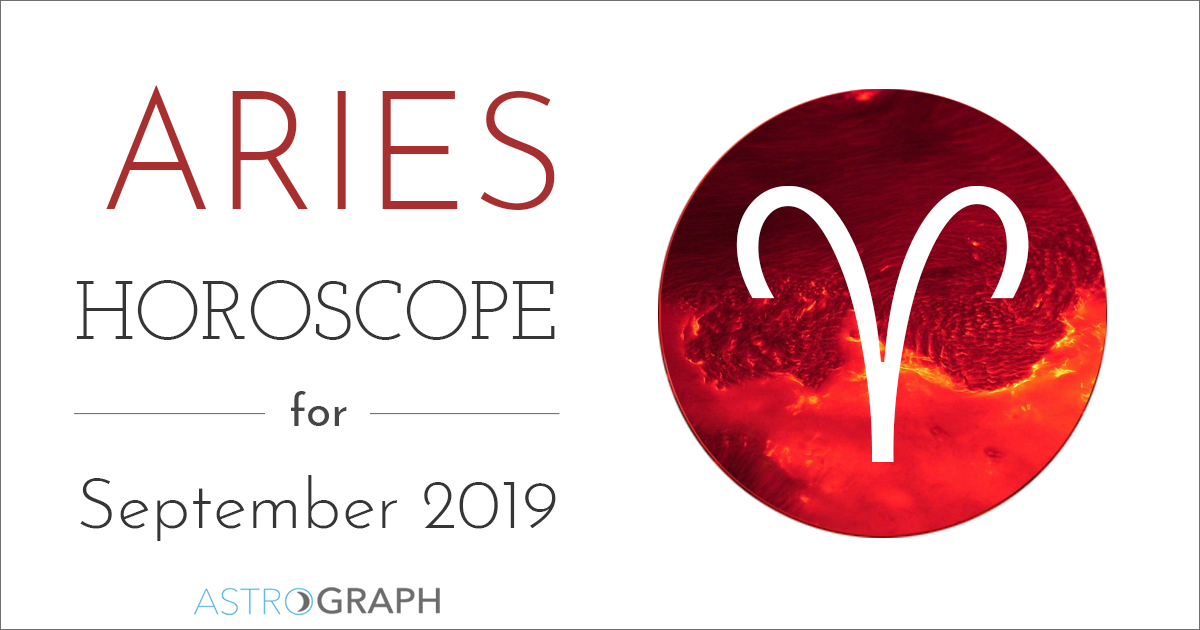 Posted on August 31, 2019 in Aries |
By Henry Seltzer and Adam Elenbaas for ASTROGRAPH Horoscopes

This is another exciting and changeable month, Aries, with a huge outer planet activation! The astrological weather report calls for slow-moving transformational change continuing to come down, with occasional thunderstorms. Saturn-Pluto is highlighted in your career sector, while the trickster energy of Uranus is also featured. There will be plenty of startling revelations with surprising progress toward goals of personal evolution. Like all Pluto transitions the secret lies in going with the flow. As it is said, true freedom may be found in tuning to the direction that your fate is leading you toward, and heading precisely that way. When you resist the urgings of the universe, and ignore where your inner guidance seems to be leading you, it creates greater suffering and disappointment of your egoic anticipations. The Pisces Full Moon of the second weekend of September will be memorable for a somewhat confusing impulse toward selfless service and relationship connection, so that it pays to be prepared.

The month begins just as Mercury in Virgo in your sixth house of work, sickness, and service is making a trine to Uranus in Taurus in your second house of money and finances, and just as your ruling planet, Mars, is at the heart of the Sun (cazimi), also in Virgo in your sixth house. Given the recent New Moon in Virgo in your sixth house (August 30th), the entire month ahead is also toned by the need to serve or to work, with the promise of surprisingly good results. This sixth house emphasis is extreme and you will likely have many occasions to reflect upon and somewhat modify, the patterns of your day-to-day engagement with the world. You may very well be in the trenches, dealing with nagging health issues, or perhaps trying to get to the root of problems or struggles that you’ve been dealing with lately. With Uranus involved, watch for a moment of greater inventiveness, liberation, strength, and motivation to appear at the very start of the month, perhaps helping you to push through a challenge or to find a new way to deal with a tricky problem.

Between September 2nd and 4th, Venus in Virgo will oppose Neptune in Pisces, emphasizing the themes of romance, art, beauty, spirituality, and imagination. At the same time you should be careful to keep good boundAries and beware of the potential to get swept up into something that isn’t healthy for you.

Between September 8th to the 12th, the Sun and Mars in Virgo in your sixth house, will both move through squares to Jupiter in Sagittarius in your ninth house of the higher mind, faith, and long journeys, emphasizing the topics of work and faith, sickness and belief, travel and service. This is an enthusiastic transit that should also be inspiring and motivational, in general.

Between September 13th to the 14th, Mercury and Venus will conjoin in Virgo and then move together into Libra. Watch for the combination of beauty and intelligence, communication and harmony, learning and love. This is also a great time to fix, restore, or analyze a problem and then implement a solution, especially within working relationships.

On The late evening of September 13th, the Full Moon in Pisces may also bring an almost otherworldly, mystical, and dream-like quality into the picture, as the Full Moon is also landing in your twelfth house. Don’t be surprised if you are dealing with questions about how much you should or shouldn’t give, how much you should or shouldn’t surrender or let go. Mars opposing Neptune at this time also brings a heightened awareness of inner priorities, and concerns, which can be confusing. Your dreams might become quite vivid, and bring you useful information as well.

Between September 21st and 22nd, Jupiter in Sagittarius in your ninth house will then square Neptune in Pisces in your twelfth house of dissolution, surrender, and self-undoing. Questions of faith and doubt, surrender and trust, will be prominent. You may be contemplating whether to pursue a dream or vision that has been forming recently, and you might be wondering whether or not you can trust the impulses that you’re feeling right now. Remember, it’s okay to believe in miracles and magic. Even though as an Aries you may feel like everything is up to you, and that effort is always required, believe now that good things can also, simply, land in your lap…especially when we offer up some surrender and trust.

On September 23rd, the Sun Moves into Libra, passing through the gateway of the Fall Equinox. Watch for a focus on relationships, perhaps even specifically your relationship with men, leaders, fathers, etc., to become important for the next thirty days as the Sun moves through your seventh house of love and relationships.

Between September 25th and 26th, Venus in Libra in your seventh house will then move through a square to Saturn, just as Mercury in Libra moves through a square to Pluto. Watch for creative tensions mounting both in the workplace and in your relationships right now. There is a deep and transformative force trying to work its way up from your unconscious right now, or from within the depths of those you are close with. It’s here to speak to you and to act as a mirror for your spiritual growth.

Finally, on September 28th, a New Moon in Libra initiates another powerful thirty-day lunation cycle, emphasizing new awareness and eventual transformation, and plants a potent seed of love in your house of relationships!